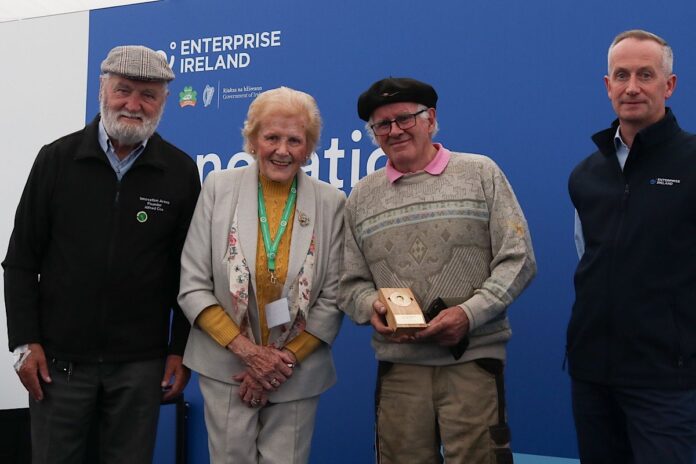 Farmers can feed livestock from the comfort of their jeep or milking parlour by pressing a Bluetooth fob-like device, with two options available.

While Knockroe Fabrication Oola, County Limerick, handles fabrication, John hires one worker three days a week, to make feeders to order, wiring them, attaching the battery/12w motor, and mounting the wheel (which runs it).

Farmers press one button on the fob for the nut dispenser to go down and again to return, with a constant distribution of nuts, giving you the freedom to control feed quantities.

“We feed 100 calves on our feeder throughout the summer, and I change the battery once if it is dull in the whole year,” he told That’s Farming.

“It is simple; all I do is I have another battery. I think the battery drives the feeder a month without charge, so you are not running in and out with a battery every second day.” 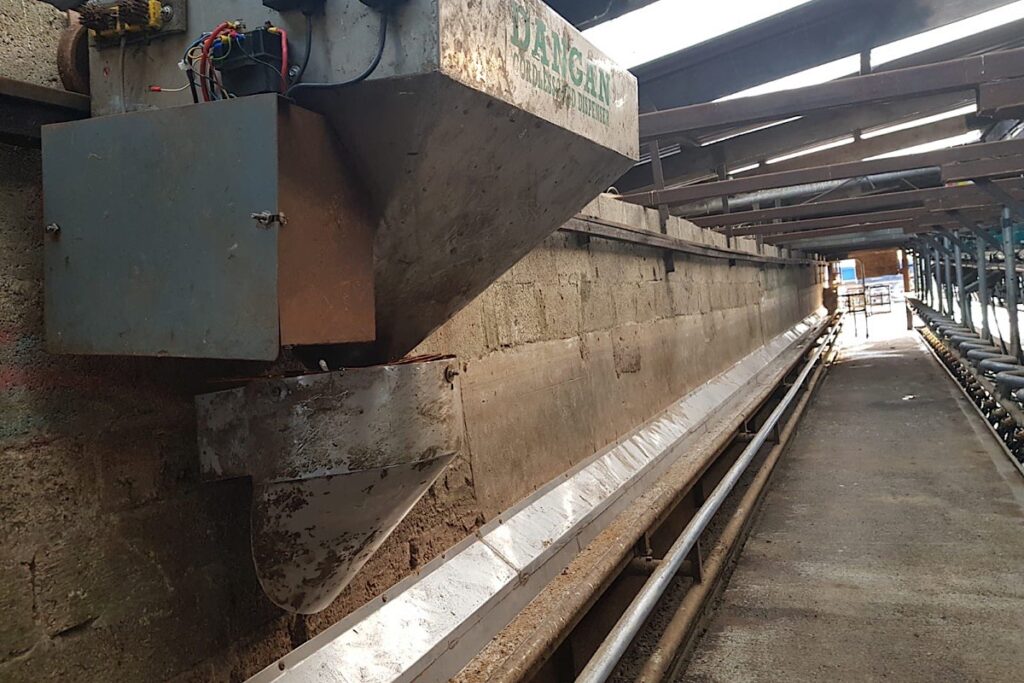 The Dangan Meal and Nut Dispenser

According to John, customers can fill the solar-powered feeder with a truck blower and add to it in 8ft sections.

There is no “physical” work involved in filling the dispenser using your tractor/industrial loader to load it.

He is targeting solar-powered feeders towards dairy farmers, keeping replacement heifers and he suggests that the milking parlour nut dispenser is suitable for farmers with no feeders installed in their milking parlours.

“To note, replacements we produce on the farm are better because it is easier to feed them.”

“The difference in my bin compared to other manufacturers is they need a bin for every two cows; my one does the whole lot goes up and down, is value for money and very simple to install.”

“Moreover, you have only one motor to give trouble compared to where others have one for every two cows in the ordinary milking parlour.”

“I feel the other advantage is if you ever want to give more nuts, all you do is press the button and let it go down. It can stop below, but it will not charge.”

“I would like to note you can install it into a building with over 8ft of headroom ceiling if you stand on the milking parlour part where cows stand. However, if there is a small headroom, I could make a smaller bin for the top of it.” 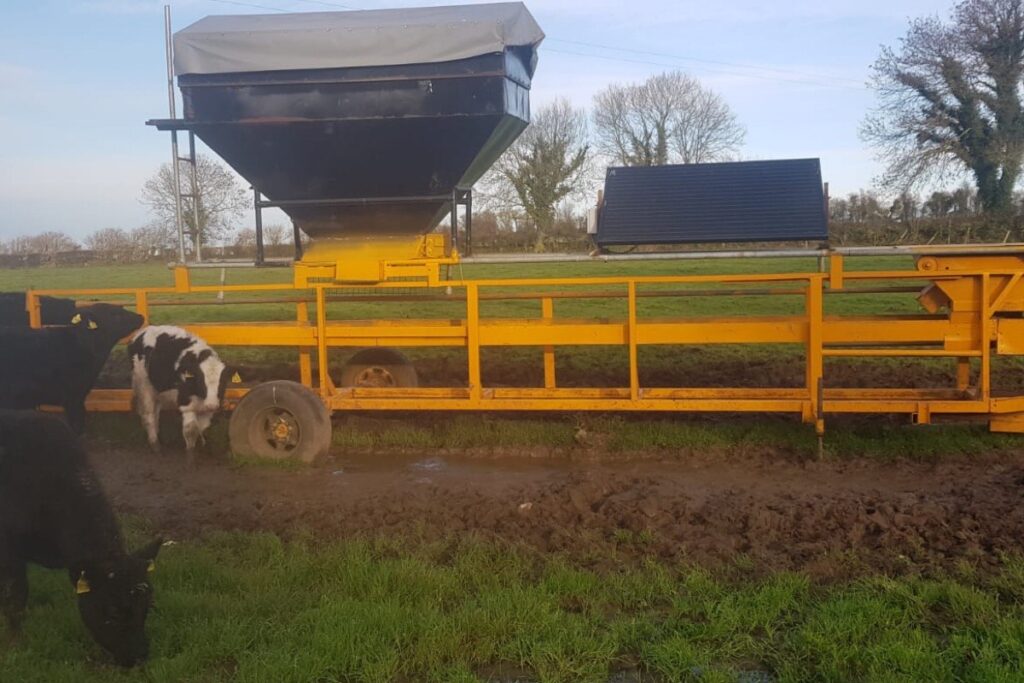 John picked up a lifetime achievement award at the National Ploughing Championships Innovation Arena in September of this year.

And the next step in his journey is designing a website and sub-letting out manufacturing.

For the moment, his son farms, and this venture, he said, “occupies my brain daily to improve with me my his next project”.

“Everything I do is simple; I do not want any trouble making a product. I sold forty milking parlour nut dispensers and ten solar-powered feeders, and not one person has returned to me.”

“If I can get a manufacturer, I could get 20 units out a week. It has potential, not because I made it – it is very impressive.”

He feels his product is an “economical” way for a 60-cow farmer to feed concentrates without filling bags or using a wheelbarrow.

“I think my feeder to install them into a 20-unit milking parlour is a fifth of the cost. There is no other feeder you can put into a milking parlour for €1,200-€1,500 in a million years that will do the same job.”

“There will be a future for them – it is very climate-friendly, with only one little motor where you could have twenty motors in lots of milking parlours,” John concluded. 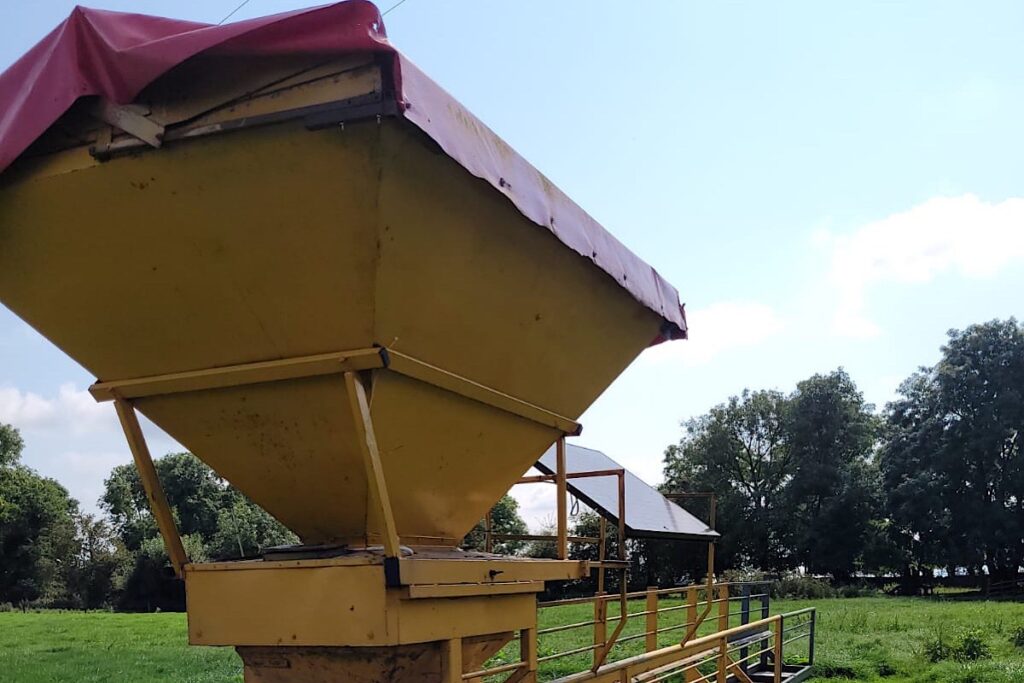 - Advertisement -
Previous article
‘At some stage in everyone’s life, they will experience a bout of poor mental health’
Next article
Simmentals top sale at Tuam Mart at €2,620