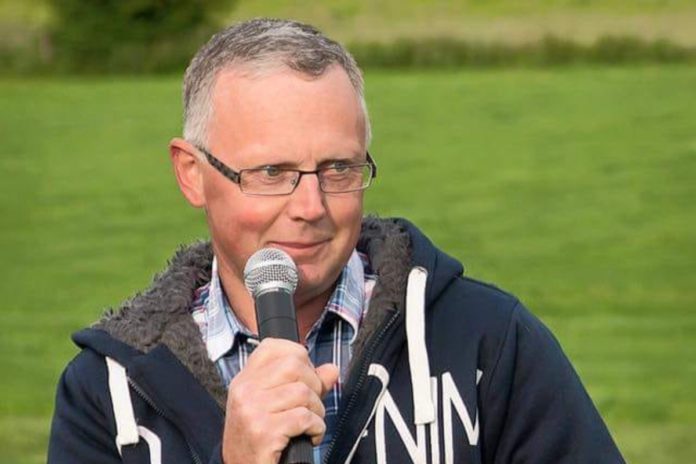 Lisnavoe Farm is a unique enterprise playing host to a 90-cow commercial suckler herd, 250 ewes, and over 500 calves.

John’s late father, Thomas, initially bought Charolais cows with calves and some maiden heifers and brought them through to slaughter.

In 1990, John established a small sheep flock and took over the enterprise in its entirety thirteen years after his father’s passing. However, he explained that he had no intentions of becoming a farmer.

“I did not want to be a farmer. I wanted to be a mathematics teacher. But I was the only son, and my father said I would have to come home to farm,” he told That’s Farming.

“I had been accepted into Queen’s University Belfast to study a degree in mathematics.”

“My father said you will not be going there; you have to go to Greenmount Agricultural College and learn about farming.”

“I went to Greenmount Agricultural College and got a national diploma in agriculture over three years.”

The herd comprises an array of commercial crossbred females. These include Limousins, Salers, Simmentals, and a small number of Red Angus to reduce calf size.

John and his family breed their replacements using maternal genetics to reduce cow size, focusing on ease of calving.

“I try to crisscross genetics all the time. By using AI, I can choose bulls to suit cows. I am very keen on trying to keep maternal traits in cows.”

“In Fermanagh, many farmers are still fond of a big 800 kg+ cow. My thinking is you need a cow closer to 600-650 kg, that is hard-working, produces a calf every year and are not heavy on the ground. 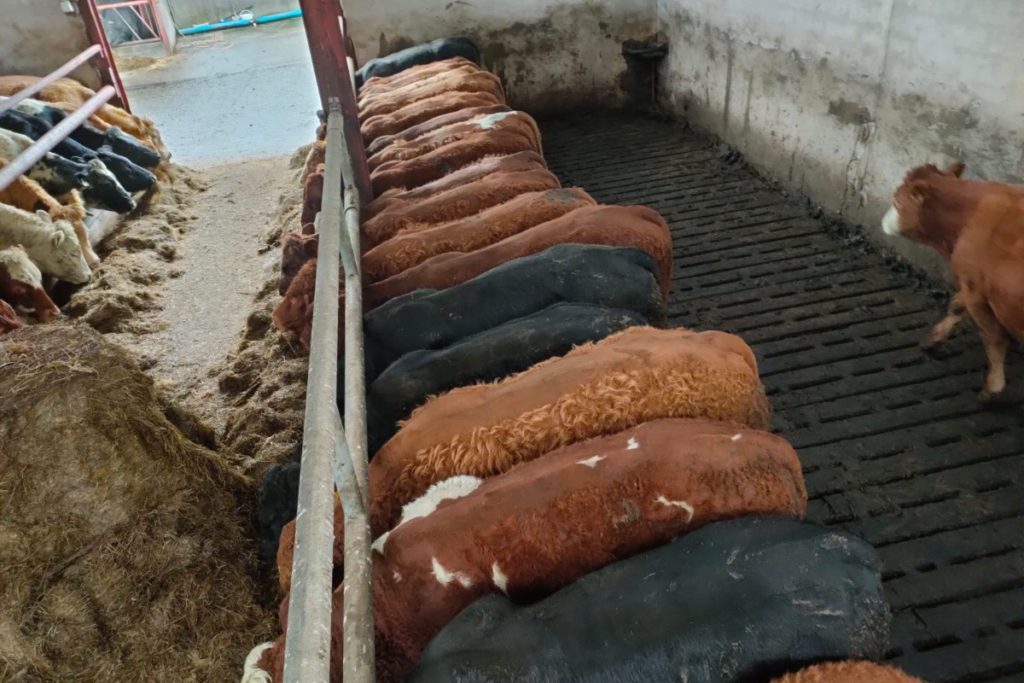 John keeps each group and herd number separate during breeding. He completes his own AI through a DIY course he enrolled in. He culls cows that do not hold from two rounds of conventional semen.

Sex semen gives John 60% heifers and 40% bull calves. It is his sixth year using this breeding option; however, he finds it challenging to source the sexed semen he desires for his herd.

After his father’s passing, he used a stock bull and AI together, but found that AI yielded higher conception rates, so he decided to sell his stock bulls.

His go-to straw for heifers is a Salers or Red Angus.

“I am more impressed with genetics down south than up north. The south has a better genetic pool and better data recording.”

The farm operates a mixture of spring and autumn calving over five weeks. For example, 45 cows calve from March to April, and another 45 calve from August to September.

The workload is split between his two sons operating the calf enterprise, who John joins forces for calving/lambing with his other son running the sheep farm.

This year, he assisted nine cows this year, two from the autumn bunch and seven from the spring-calving herd.

“Then, in autumn time, if weather conditions deteriorate, I can wean my spring-calving cows and put them in the house, and I have only my autumn-calving cows out.”

The herd’s calving interval stands at 365 days, with an average mature cow weight of 645kg.

In John’s view, “If they are not good enough to have calved at two-year-old, I am wasting my time and money keeping them to two-and-a-half or three-year-old”.

“I feel the best genetics are the ones that are going to make it to two-year-old.” 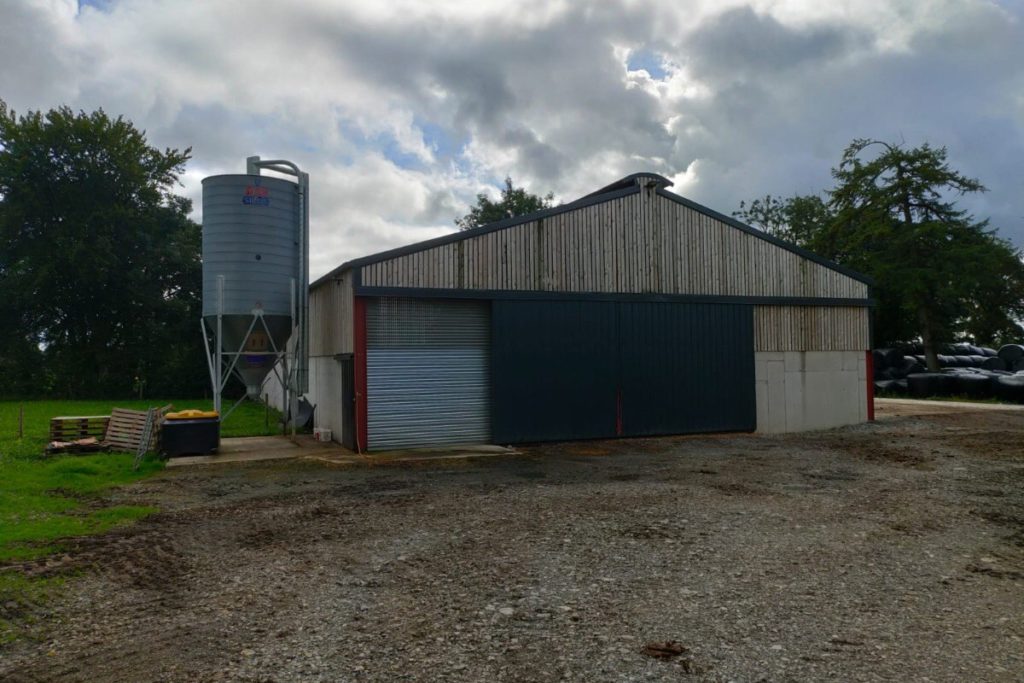 John decides what heifers he will retain based on scanning results. He usually sells 10-15 in-calf heifers and two maiden heifers on-farm to repeat customers.

The reason for culling is they do not prove in-calf after scanning or if they have a temperament issue.

He culls them immediately, or they can be brought into the shed for one or two months for fattening.

John finishes his male progeny (usually 40-45) as part of a bull beef system and slaughters them at 16-months-old in ABP Food Group Newry.

They are fed with good-quality silage with little meal (formulated from their silage analysis) twice-a-day manually. 0.9 of a T of silage and concentrates is the lifetime feed of these males.

“I am breeding everything to be a heifer, and some of them end up as bulls, so they are really a by-product.” 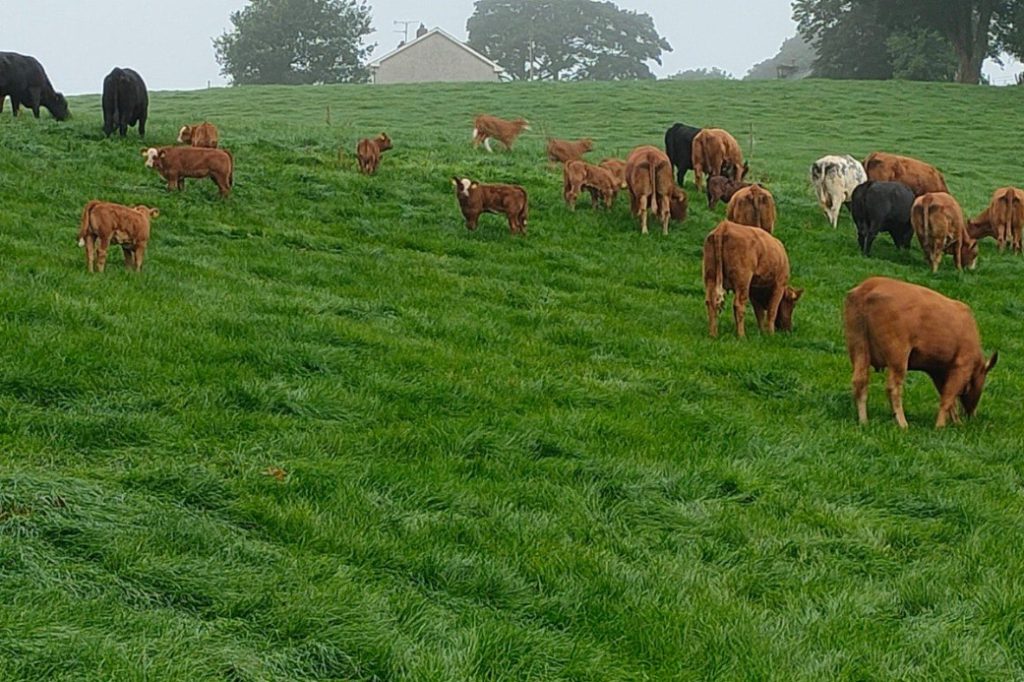 John is in his fourth year working with the McGlade family and it costs £1.20 per day to rear these calves.

He explains that this helps clean out his paddocks after sheep and cattle graze.  Kevin covers all vaccinations, and dosing and pays John to AI them. John returns all heifers to him at two-years-old.

“It works well. He still owns the cattle, but I get a regular outcome out of them. It is definitely beneficial as I have money coming in every month without having the outlay of owning more cattle.” 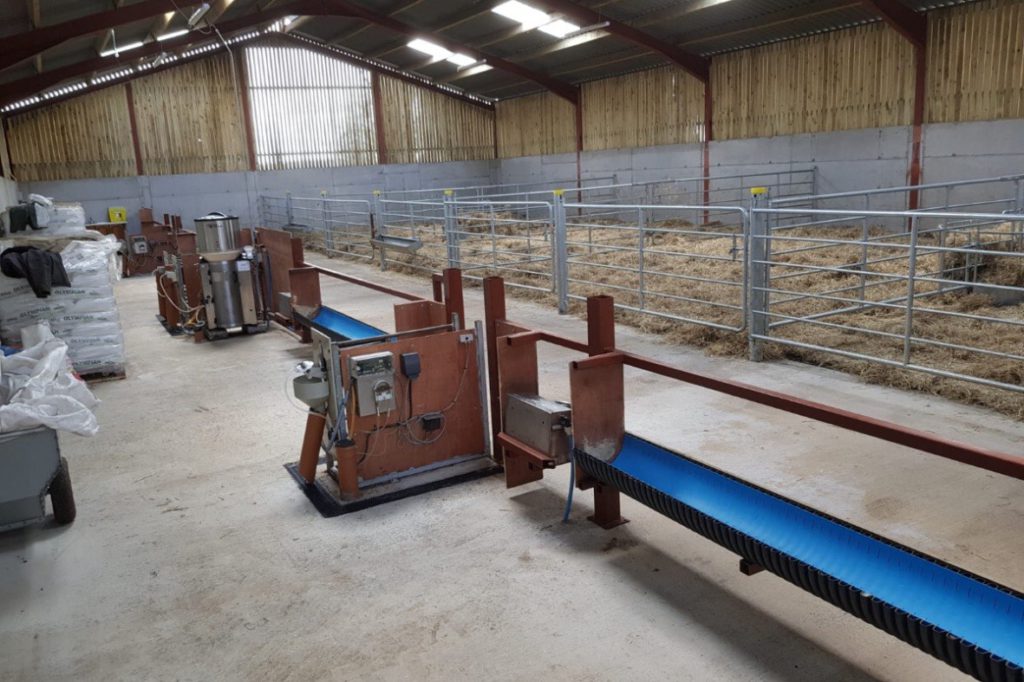 John and his sons also have a calf rearing enterprise consisting of 120 calves, taking in four batches per year at three-week-old. He keeps them for 12-weeks.

The Egertons received a rearing fee and bonuses with calves. They never let them outdoors.

The feeding regime involves a Foster Technique automatic calf feeder, which has four stations and can feed 30 calves per section.

John feeds ABP milk replacer through the feeder for six weeks with all calves EID tagged.

“So, they can come as often as they want, but it is all computerised and regulated. They get no more than 6L a day or 3L in any one feed.”

“ABP has their programme on the computer, and after five weeks, it starts to reduce the amount of milk they get. However, it never puts them down to once-a-day.”

“It is gradually tailored between a week to ten days until they are completely off milk altogether.”

They are bedded on straw and are also fed this, along with an ABP formulation ration ad-lib over the course of twelve weeks.

The meat processor allows wastage and deaths, but he must record all treatments, dehorning, and complete weekly feed and remedy sheets to avail of this payment.

They leave the enterprise when they are 15-weeks-old and go to other farmers. 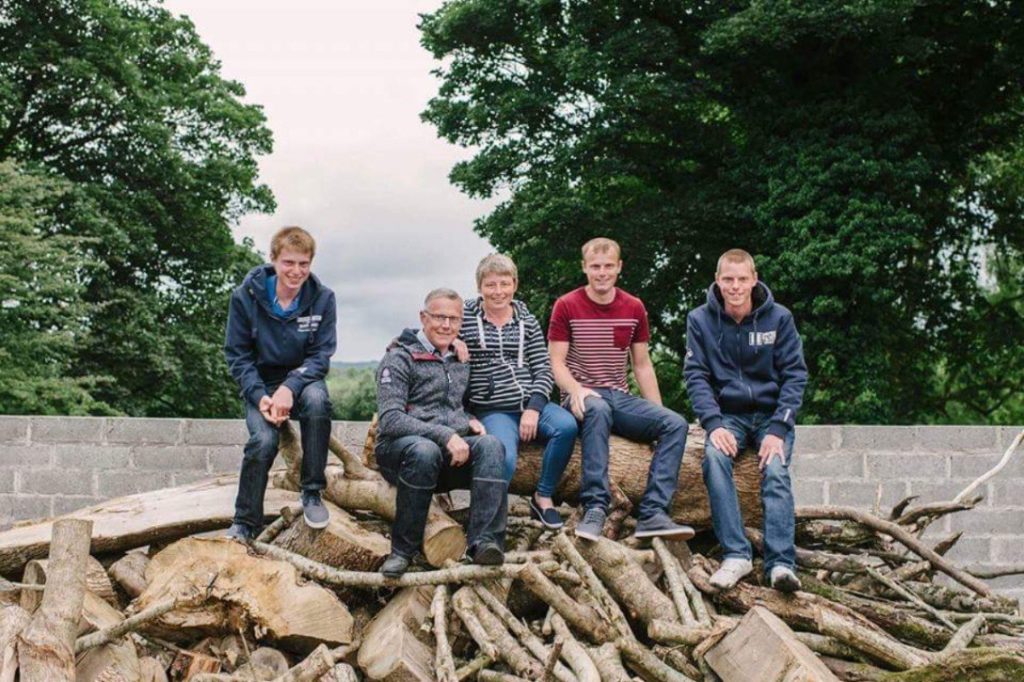 Besides, John and his family run a 250-ewe flock, consisting of New Zealand Suffolks, Belclares, and LIeyns.

“New Zealand Suffolks are very good on their feet. However, we have wet conditions here in Fermanagh, and foot rot would have been a problem.”

“We find New Zealand Suffolks are less prone to foot rot. They are very prolific sheep, and worm burden would be slightly less than a traditional Suffolk.”

“The aim is to try to get as many lambs as possible. We are not pushing to get U-grade lambs; we want lots of R grade lambs killing out, in Linden Foods between 19kg-21kgs. Ewes need to be able to rear two lambs each.”

“We only buy in rams and sell ewe lambs as replacements to other farmers and sends the rest to the factory.”

The farm started with the Belclare breed and decided to purchase a Lleyn ram two years ago. They have further intentions to try a second LIeyn ram next year. 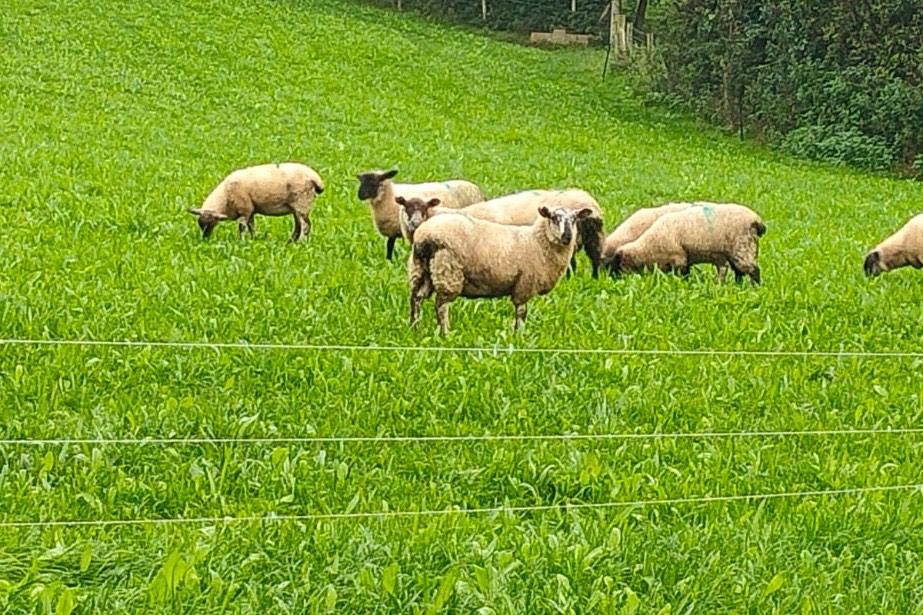 John has no aims to increase the size of his suckler herd or sheep flock due to the availability of land.

Instead, he hopes to continue breeding better genetics, feed good quality silage, and purchase some land.

His long-term plan is to leave his family to operate the farm together. His eldest son, William, runs the sheep enterprise, with his two other sons, Samuel, and Robert, focusing on the calf blade enterprise.

John runs the suckler farm solely, assisting their other enterprises at different times.

“I think if a suckler cow is looked after well and the job is done well, there are a few pounds in them; you will never get rich out of it.”

“I am happy enough that a suckler cow well looked after will return a living. We do financial benchmarking, and sheep do not make as much money as suckler cows, but they have a role to play and a place.”

“A lot is going on here, and each enterprise seems to knit in nicely to the other. Sheep have a role to play on wetter parts of the farm where it is not easy to graze suckler cows.”

John is watching suckler farming closely in the south of Ireland too, where a proposed sucker cow cap has been mooted as part of the Suckler Carbon Efficiency Programme.

“I think the proposed suckler cow cap is disappointing in the south; I hope they do not do that in the north.”

“The dairy-bred beef has a role to play, but there are more marginal areas that can do nothing but only keep suckler cows,” the NI suckler farmer added.

“It is sad if they are going to cap suckler cow numbers,” the winner of 2019 beef innovator of the year at the British Farming Awards concluded.

- Advertisement -
Previous article
VIDEO: 28ac holding with residence, sheds and yard for auction
Next article
‘Although costly and time-consuming, heifer rearing can be rewarding’