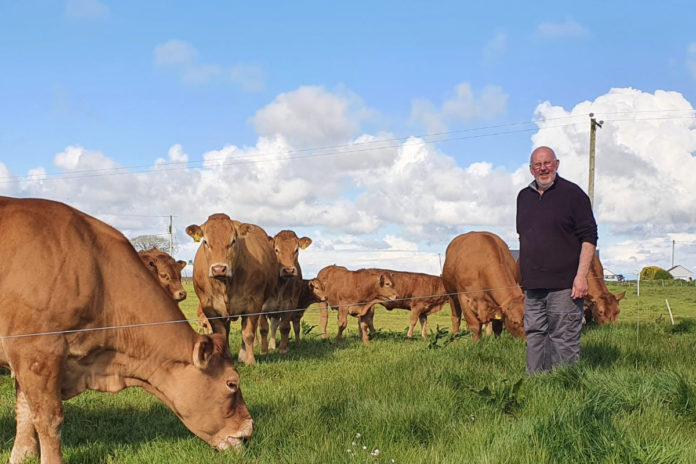 As part of our Suckler Focus, That’s Farming speaks to Donie and Maura McKeon of Milan Limousins.

Donie, a part-time agent for Ark Animal Care Limited, has a connection with Everpark Partylight, the animal that sold for 50,000gns in Carlisle last week and his current stock bull, Millington Lesley.

“Millington Lesley was bought at the Millington dispersal sale in 2016. His maternal sister Millington Highlight was the top price on the day; she made 50,000gns.”

“However, it was a son of hers, Everpark Partylight, which sold in Carlisle on Saturday, May 8th, making the top price of 50,000gns,” Donie McKeon, who studied a general farming course in Multyfarnham Agricultural College in 1977, told That’s Farming.

In 2016, Donie decided to buy Millington Lesley; he completed the sale based on the excellent pedigree lines he carried.

“His dam, Brockhurst Option, is one of the top cows in the Limousin breed in the UK with sires such as Clara, Franco, Cannon, Vantastic, Sympa, and Talent in the back pedigree.”

Switching from dairy to beef

Until 2008, Donie operated a 25-cow pedigree Dairy Shorthorn enterprise but decided to convert to suckling.

During his time as a dairy farmer, he achieved huge successes in the Balmoral Show, Tullamore Show and the RDS.

“We did not have enough land to milk enough cows; we could only milk 25 cows. If we had enough land, we probably would be still milking alongside the pedigree Limousins.”

Furthermore, Donie bought his first pedigree Limousin heifer off Roger McCarrick in 1998. This maiden heifer was the granddaughter of the famous Estelle. Then, in 1999, he purchased Hammel Fleur, an older cow using embryo transfer to increase numbers rapidly.

In 2005, McKeon acquired four females off the UK Greenwell Herd: Greenwell Nell, Greenwell Norma, Rafalle, and a french cow with her heifer calf.

Donie noted that four of these heifers were the first daughters of his stock bull, Millington Lesley. “These heifers have calved now, and Mervyn is very happy with them and the calves they have produced.” 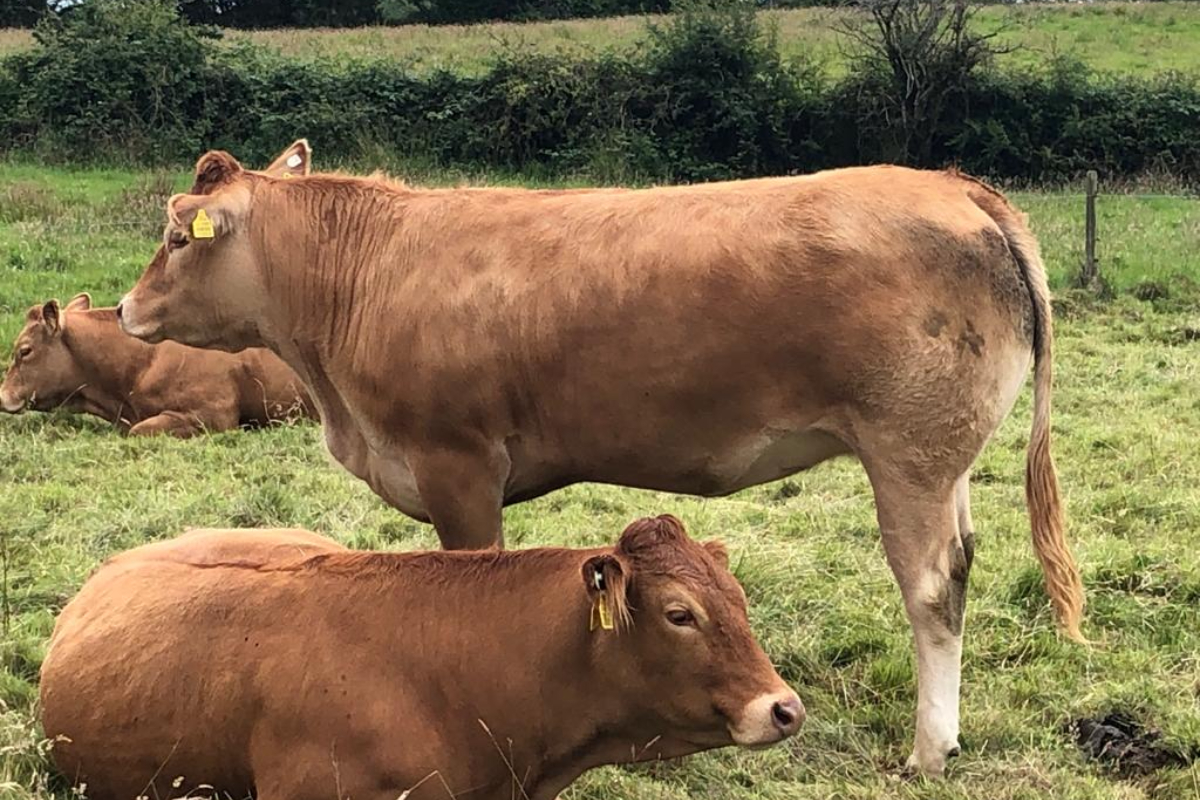 He noted before the arrival of the Covid-19 pandemic exhibiting animals at summer shows helped lift his herd’s profile, generating sales.

“This year has been a better year to sell bulls than last year. The fact that the cattle trade is good at the minute is helping bull sales.”

“We had 16 bulls to sell last year. We sold one in Roscrea in March, one at the online sale in May, and all the rest of them from home.”

“It was the same breeder who bought the two heifers, a new breeder in Galway. Another Milan heifer, Nigella, was the top price female in Roscrea in May 2020, selling for €4,300 for owner Garrett McGuinness.”

“The most successful animal breed in the Milan herd so far was a bull, Milan Jefferson, a Foreman, son, having won 16 red rosettes, selling in Roscrea in October 2015 for €12,200 aged twelve months.” 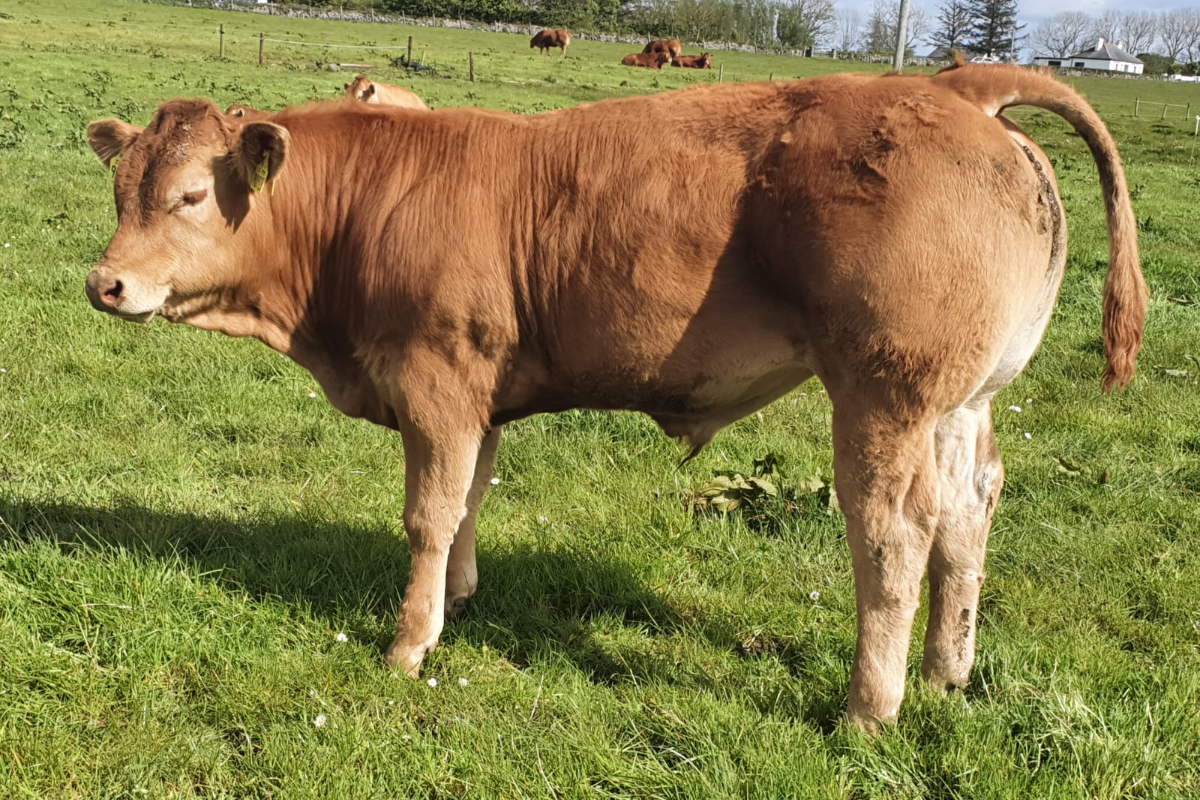 He commented on the use of embryo transfer in the herd being small, noting he utilises the method to enhance his herd.

“There would be certain heifers we would retain if that were the only heifer we had from a certain female line. Surplus heifers are offered for sale depending on the numbers.”

“Two years ago, and last year, we did have females for sale. This year, we may decide to sell one or two, but we would be keeping most of the females.”

Donie pointed out the first thing he looks for in a cow is a good pedigree. “Pedigree is very important in a female, good back breeding, good sires, and good dams as far back as you can go.”

“If you want to breed good cattle, you have to have a deep pedigree, plenty of length, a wide pelvis, breed character, pleasing to look at, and good milk.”

“A cow needs to be able to rear her calf. If you do not have good breeding in your females, it will not follow through in their calves.”

“This is why we bought Millington Lesley, having an excellent pedigree which he is passing on to his progeny.

“In the past, the Limousin breed had a reputation of having a docility problem; this has been largely bred out of them.” 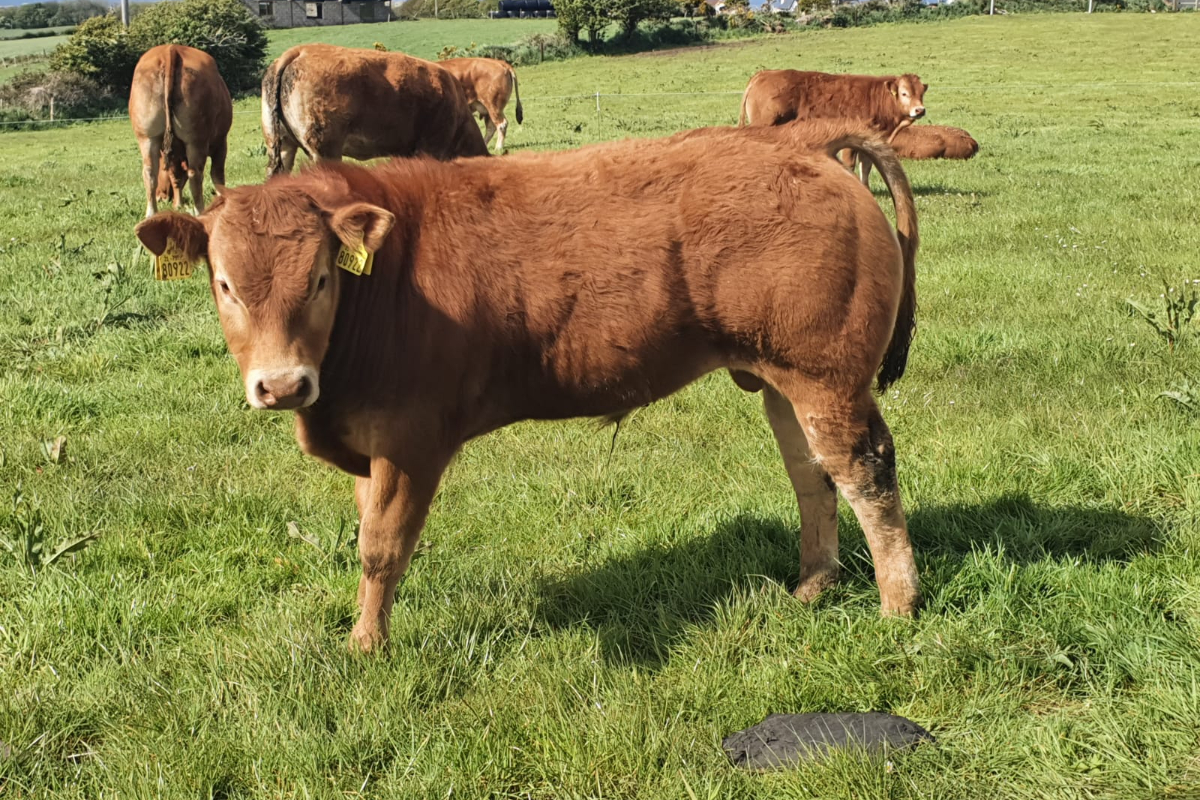 Furthermore, he explained, “if you are breeding quality cattle, you will get paid for them”.

“I know there is pressure on the suckler farmer at the minute, as regards beef prices, but I think if people can stick with it, they will get paid in the future for producing good cattle.”

“The day of producing a weanling worth €500 or €600 is gone. You need to be producing weanlings up around the €1,000 plus mark to succeed. People are doing it, but it comes down to breeding; breeding is very important.”

“I know people who can go back six or seven generations in their sucklers, and they know what they are doing. They are breeding good cattle, and those people deserve to get paid for their cattle.”

For a breeder considering the Limousin breed he advises the following: “Do your research, select the best bloodlines you can find. Look at your pedigrees and go back as far as you can and buy a good foundation female.”

“Do not rely on data or stars. Stars are alright, but I would not be buying on stars; you would want to buy on pedigree.” 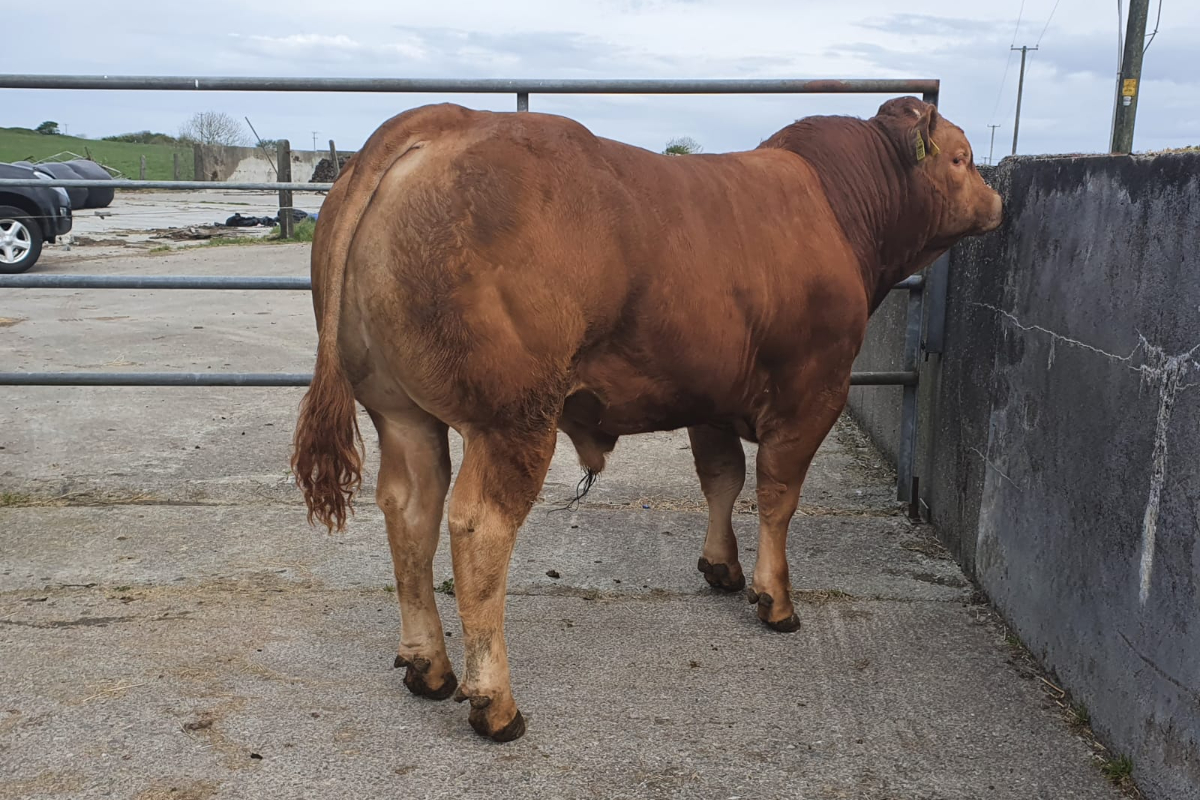 Furthermore, Donie outlined why he chooses a calving period, starting at the end of August and finishing at the end of March. “You will have bulls to sell in autumn and springtime. You do not want all your bulls born in March and April.”

“A September bull is ideal for selling in February, and March, calving at 30-months, giving you a stronger heifer. The extra few months makes a big difference; she is better able to calve, rear her calf and will go back in calf quicker.”

“We use a certain amount of AI alongside the stock bull. We used many French bulls in the last couple of years. To note, we find you get better females off them. They come from a reliable test programme in France; you can rely on the figures. There are some cows we are not able to use on our stock bull on as they are closely related to him.”

According to Donie, the grazing system in operation on the farm gives the suckler herd fresh grass every 48 hours, providing him with greater accessibility.

“We find it is a big help for getting cows in for AI. They are used to getting moved, and there is no problem moving them; I can get them in by myself.”

“The Limousin need human contact; if you have Limousin cattle and you drive down the road and count them across the ditch, you will have a docility problem. If you are walking in among them every day, it makes an awful difference with the docility.”

The future of Limousin

Commenting on the Limousin breed’s future, he explained they are versatile, with “huge” numbers of commercial cows available in Ireland.

“If you have a good Limousin commercial with good breeding potential, they are very sought after and are making extraordinary prices at the moment. They are good calvers, have milk and can rear their calf.”

“I think they put that extra bit of quality into a calf, no matter what sire you use on them; that is why they are highly sought-after as breeding females.”

“One thing we do not want is difficult calvings. I would be staying away from any bull that has a high calving difficulty.”

“There is nothing better than finding your cow calved and their calf standing up beside them; that is what you want in your Limousins.”

Reflecting on his journey

Summing up his journey so far, Donie said his dad was a fisherman. However, he spent most of his childhood working on a neighbour’s farm, which sparked his farming interests.

“I would probably be a lot richer if I was doing something else, but I developed a huge passion for farming, and, in particular, for pedigree cattle breeding, he laughed.

“I get great satisfaction out of breeding good cattle. It takes hard work and dedication but achieving success over the years has taken a lot of pain out of it,” the owner of Milan Limousins concluded.