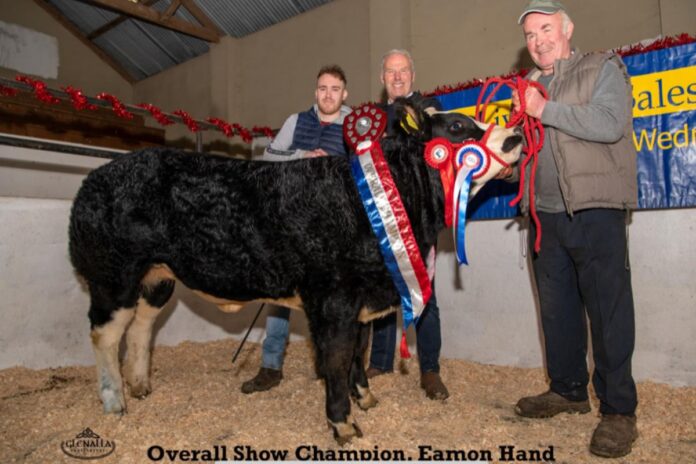 According to management, some 350 lots were presented for sale, with approximately 120 of these partaking in the fatstock show and sale.

“A very successful fatstock show and sale took place in Manorhamilton on Monday with a great selection of quality stock on offer.”

“A 98% clearance was achieved, with buyers and sellers very happy with the trade. Buyers and sellers travelled from far and near with sellers from all over Connacht present, including south Galway.”

“Many buyers came from Down and Armagh as export facilities are provided on-site.”

The top price achieved on the day was the overall champion, a BBX weanling heifer, born in April and weighing 400kg, which sold for €5000, as highlighted above.

First in the bull weanling class, was a LMX, which changed hands for €4100.

The housewife’s choice saw the hammer fall at €2140, for a LMX born in September of last year and weighing 510kg.

“The greatest demand on the day was for well-marked breeding heifers, and the most difficult lots to sell were the plain male weanlings.”

“Good quality suckler stock sold well. We were delighted to see everyone take great pride in their livestock, especially in the young handler class, which attracted a large interest.”

“Overall, the mart would like to thank all the sellers, buyers, judge John Killen, sponsors, photographers, and for everyone’s co-operation in making the event such a huge success,” the spokesperson concluded.

In other news, earlier this week, we reported that a January-2022-born Belgian Blue bull sold for €52,500 in a timed virtual auction.

- Advertisement -
Previous article
12 reasons why you should date a vet
Next article
VIDEO: New record price of €8,900 at Raphoe’s fatstock sale