Read a report from the Irish Limousin bull sale held at Tullamore Mart on Saturday, March 2021.

The Irish Limousin Cattle Society held its Tullamore sale under strict Covid-19 guidelines after the lapse of a year.

In a statement following the sale, a spokesperson for Irish Limousin Cattle Society, said: “We would like to thank the management and staff of Tullamore Mart and our stewards, William and Michael.”

“George Candler was back on the podium for the sale, which was conducted on LSL online platform. Many thanks to George and Ronan for his assistance.”

“Best wishes to all purchasers – the Irish Limousin Cattle Society will host its next sale at Athenry on Thursday, April 15th.” the spokesperson concluded.

Firstly, leading the charge at €4,900 was OLDTOWN PADDY (main image), an outstanding Ampertaine Commander son. August-2019-born Paddy was bred in Thurles, County Tipperary by William and Brendan Hogan. Paddy’s dam, the homebred Oldtown Lillie, is a daughter of Elderberry Galahad.

Furthermore, well-known Kerry breeder, Sarah McElligott, presented three bulls at the sale. Firstly, topping the consignment from Sarah’s herd was the Hamac son, SHANNON PIRATE. This July-2019-born bull carries five-star ratings in almost all indexes, including replacement at €139 and terminal at €140.

Pirate’s dam is the Lino daughter, Shannon Alice. After a flurry of bids, the hammer fell at €3,900 to Offaly’s James Murphy.

Punch is the first calf of the homebred Queenshead Altea daughter, Drombanny Maple. He carries two copies of the F94L gene and five-star ratings in replacement index, terminal index, carcass weight and carcass conformation. Eighteen-month-old Punch was the pick of Edward Conway from Co. Kilkenny. 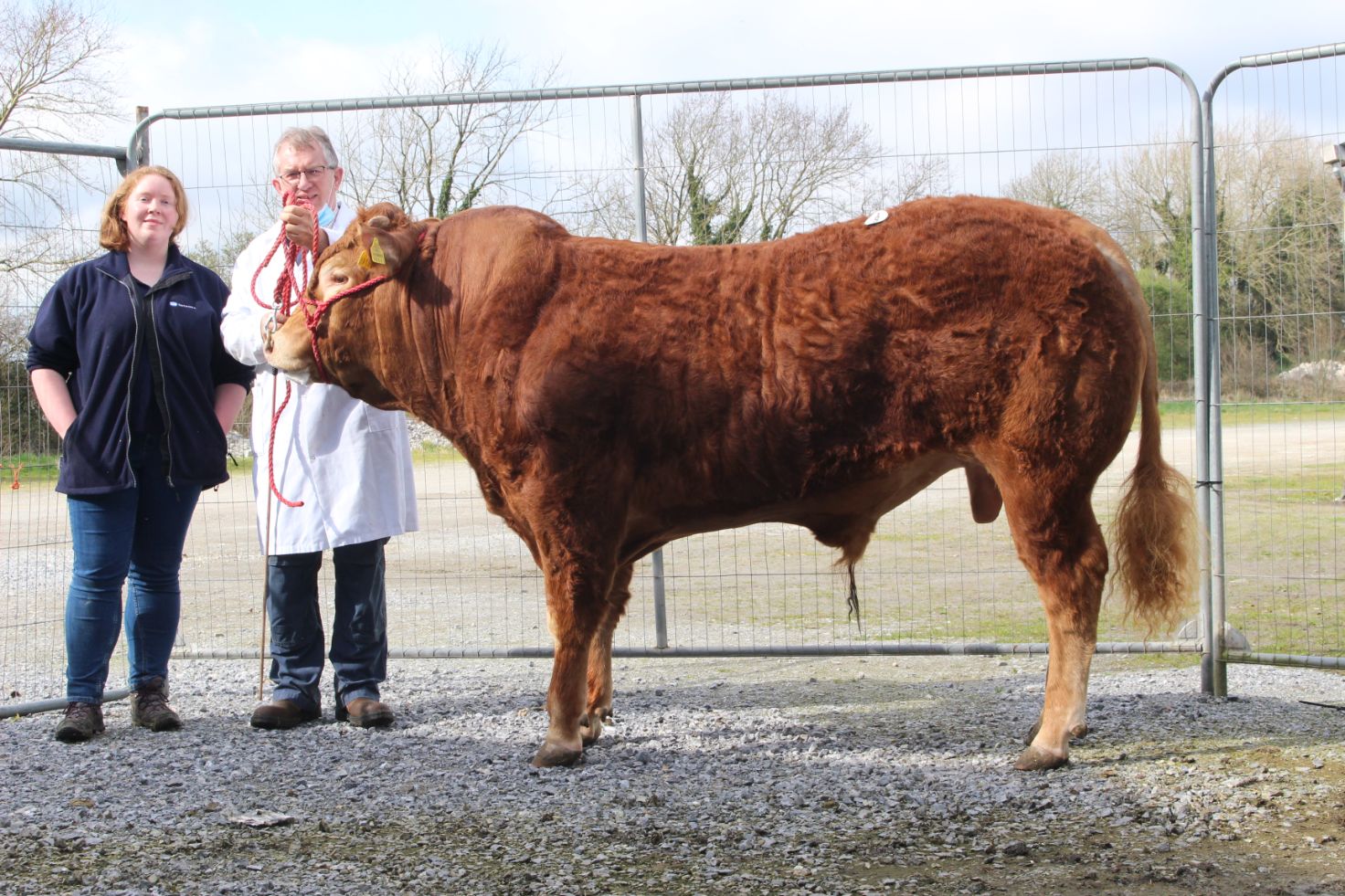 The Engy son, SHANNON PORTER, was the second bull on offer from Sarah McElligott. Porter boasts an array of five-star ratings and is predicted to be easy calving.

His dam, Shannon Kisandra, has On-Dit and Ronick Hawk in her back pedigree. Fergus Geraghty, Kilbeggan, County Westmeath, was the successful bidder for Porter at €3,050.

Both bulls are sons of Doudou. John Gavin, Borrisokane, County Tipperary purchased Prince for €3,000. Born in October 2019, Prince’s dam Carbery Elena is herself a daughter of Sympa. Elena has competed very successfully on the show circuit.

His multi-starred stablemate, Panther, sold for €2,600. Panther has Kaprico Eravelle and Elite Forever Brill in his back pedigree.

Matthew Fee from Corrawallen, Co. Leitrim presented the only females on offer at the sale, MULLAGHBOY PRIMROSE and MULLAGHBOY PENNY.

Besides, Mullaghboy Penny is a daughter of Lodge Hamlet and the Sympa homebred-dam, Mullaghboy Jessica; she sold for €1,800. Francis Kavanagh, Corrandulla, County Galway acquired both heifers.

- Advertisement -
Previous article
‘I am an all-rounder on the farm’
Next article
€12,500 Lissadell Mr Mularkey VIP tops Simmental premier sale