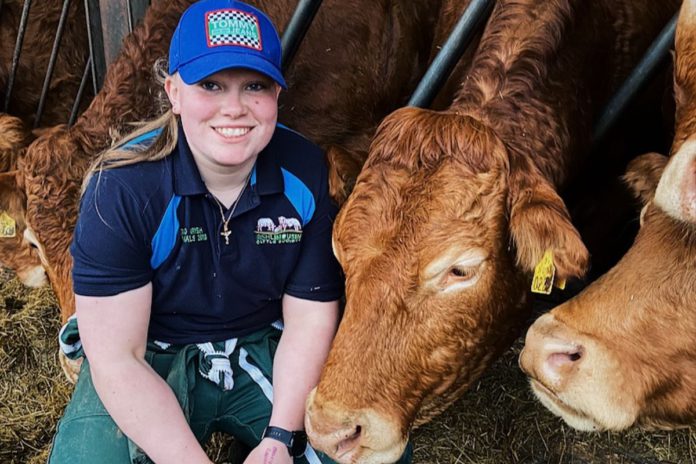 ‘I am a very competitive person’ – Limousin show exhibitor (22)

“Some of my earliest farming memories are standing in gaps and thinking it was a life and death situation. I took it so seriously; I had a fear of God they would get past me.

“My mom and I do most of the farm work. I have a twin brother, Oisin, and a younger sister, Maeve, who are always willing to give you a hand. My father, Brendan, has a global role for Elsevier Science Publishers.

Before the Covid-19 pandemic, he spent a lot of time abroad, which is good because he is notorious for plugging out the fence (forgetting to plug it back in) and leaving gates open.

I am involved in the day-to-day general running of the farm. We have a strip grazing system at the moment. I do general work, including dosing, feeding, and bedding.

Outside of ordinary day-to-day duties, I also halter train our bulls for sales. I enjoy this job. It is tough but very rewarding when you get a more difficult one going. 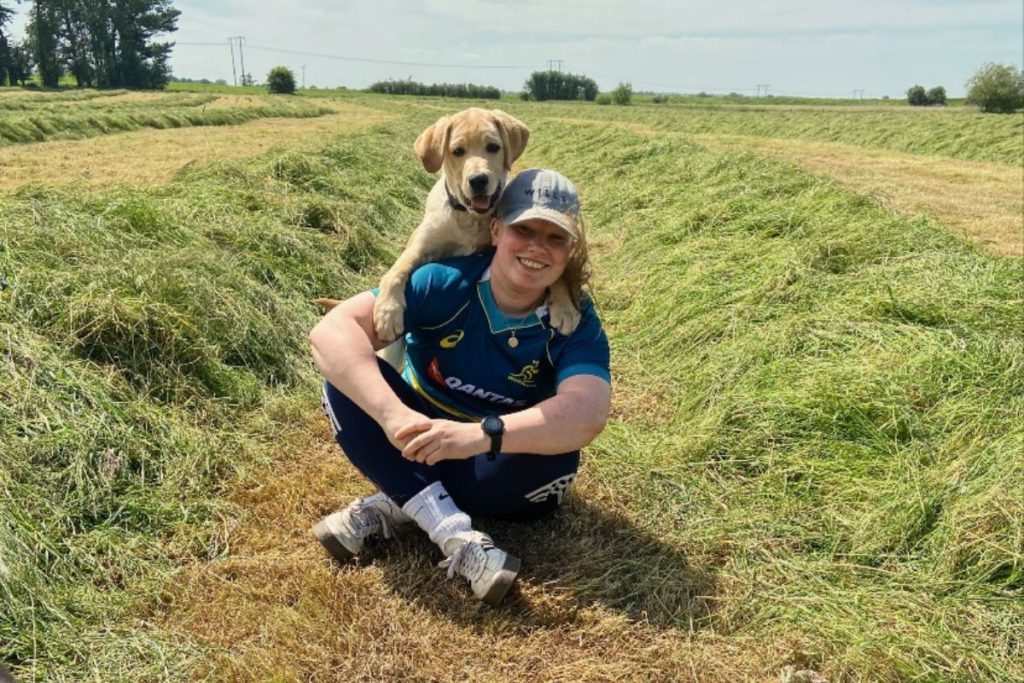 We established our pedigree Limousin herd in 2000 by purchasing two heifers in Mallow at an Irish Limousin Society sale and two at its Roscrea premier sale.

Furthermore, we made purchases at the dispersal sale of the Carwin herd of Ray Carolan and John Downey’s Thomastown herd.

Also, we acquired some in-calf heifers at an Ardlea heifer sale and the Roundhill and Castleview heifer sales.

One of our best investments was a French cow, Babou, at Ray Carolan’s sale.

She was the second lot into the ring on the day and sold with her heifer calf at foot and back in-calf to the renowned Roundhill Saturn.

Babou and both her daughter are excellent breeders with tremendous milk, fertility, and docility.

Another heifer that left a legacy was Castleview Bramble, a Ramses daughter that we purchased from Sean O’Sullivan.

Personally, one of my own purchases, Roundhill Eleny 1191 ET, (known at home as Sticky), had six bull calves. She paid back my initial investment with her first calf. 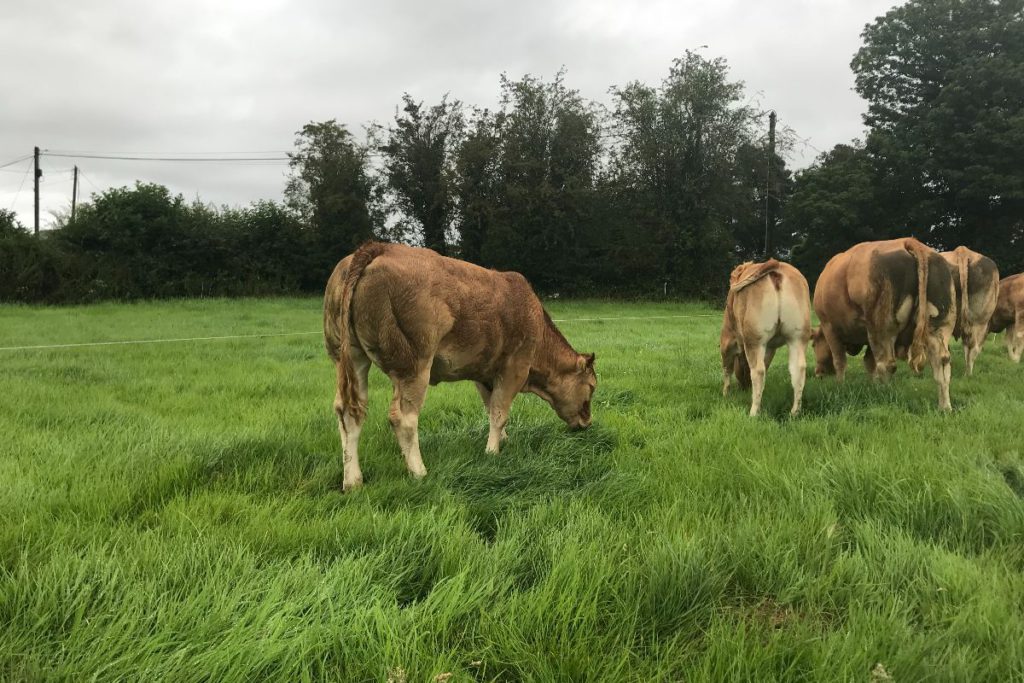 We calve the bulk of our cows from September to November. However, this year we have six calved already. Ideally, we want young bulls going from the herd at about 18 months.

We get Dr Dan Ryan to scan our cows, so we sometimes have a few calving at funny times. They are often cows we are fond of and want to keep and give a few chances to.

Being a smaller farm, comprising 22-25 cows, and focusing on docility, you get attached to cows and their bloodlines.

I used to love the real showy type of Limousin – eye-catching, muscly, and powerful. My mom prefers the more traditional type. If you walked through the stock, you would quickly see which are mine and which are moms.

However, as I have gotten older, I think I am beginning to see now why my mom went for a more traditional style of Limousin.

I have been fortunate enough to visit renowned herds in the UK and France and see the mothers of famous AI sires, and I was shocked.

Often, I have found the really muscular cows could nearly pass as bulls. They do not put as much into the calves and manage to maintain their condition.

I now look for more femininity in heifers I am interested in, and my eye is always drawn to a wide pelvis with square plates.

The most important thing is mothering ability – Limousin has this in spades. Good size, a good wide pelvis with square plates, docile and milky with good legs. 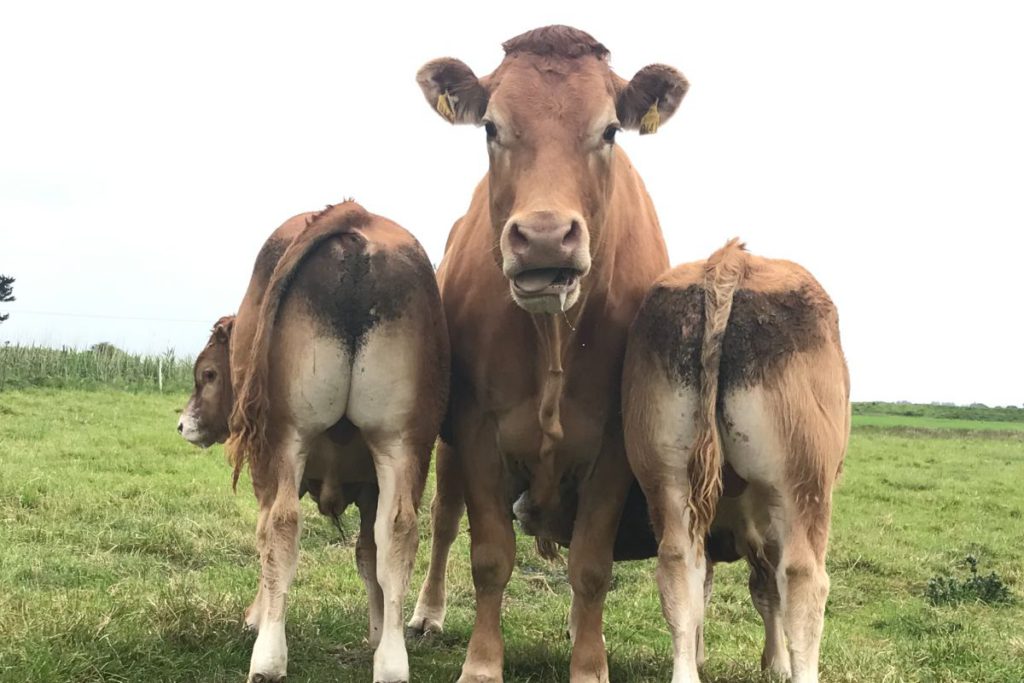 Advice from a Limousin breeder

My advice to aspiring breeders is to become a student of the breed. Limousin has a traditional, more French-style and a British, more muscular style.

Find out which one you like and also go to sales and shows and talk to people. Breeders are passionate about what they do and are always willing to help and advise.

Make sure you look at the reliability index stars as they often fluctuate, and this is less likely when there is high reliability with the star rating.

Also, do not be afraid to gamble on an older animal at a dispersal sale; there are always bargains.

We do not undertake any ET work but operate a 100% AI breeding programme. Overall, we try to match cows to bulls with the traits she may lack.

We sell most of the bulls for breeding – both at home and at society sales. For the last couple of years, we have had substantially more heifers born than bulls.

We have four heifers entered in a sale in Roscrea on September 4th. The sale is organised by the SW and Cork clubs and has 29 heifers catalogued.

Our Limousin club is the southwest club. I try to go to the club meetings, to exchange knowledge.

Due to Covid-19, the club changed to Zoom meetings, and we had some fantastic guest speakers from NI and GB. Some of the best breeders from the British Herdbook were very generous with their time and information at these meetings.

The most enjoyable moments of farming for me are bitter-sweet – mainly around calving.

Things can be frustrating with bad weather, and a young calf that may be taking time to get going suddenly decides it is time to latch on. You look into a shed, and he is drinking with his tail swishing – it makes all the effort worth it.

I love an underdog – when you see something in a young animal – that no one else does, and after a period, they turn themselves around, and everyone can see the potential you knew was always there.

I am a member of the Irish Limousin Young Members’ Association (YMA). We only every show our own cattle at society show and sales.

However, I have been lucky enough to show for some other breeders – the Corridans, Noel Fennessy of Wood Road Limousins and Micheal Roche of the Knockcoolkeare herd. I have had some great days in the show ring with their cattle.

All three herds above have won many championships at local shows and regularly pick up red rosettes at Tullamore Show and society sales.

We enter our herd into our regional herds’ competition. It is a great chance to get someone else’s opinion and insight. It is always a great opportunity to learn, and we have received some great advice and new perspectives.

We have received first prize in the medium herd and best group of calves and best breeding heifer on a few occasions, which is always nice to see your breeding program is paying dividends. 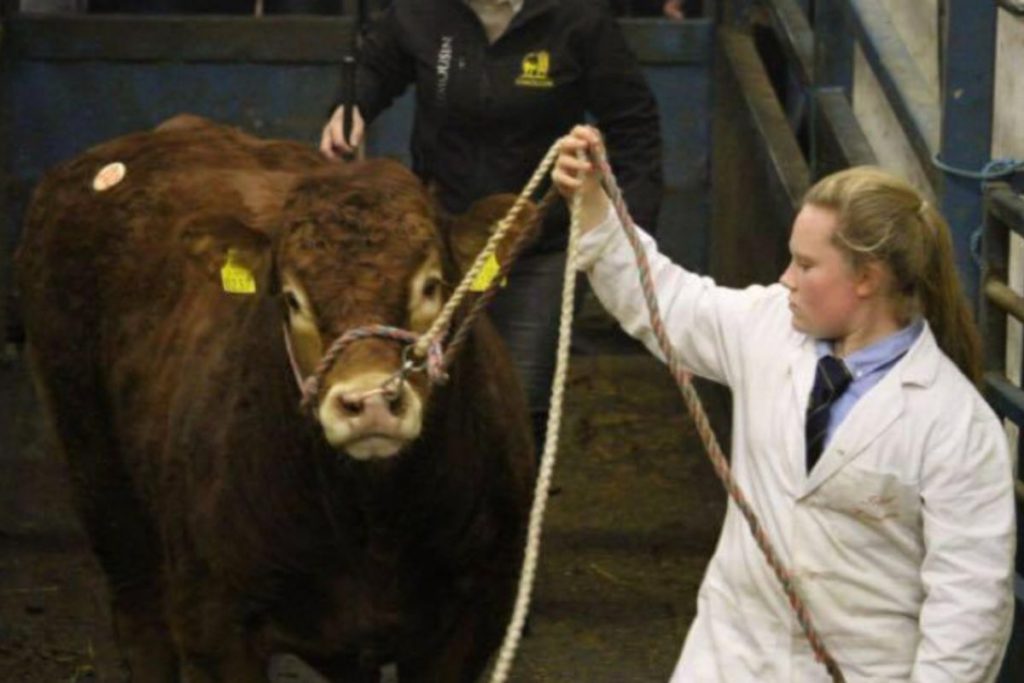 I have competed in many YMA competitions and was lucky enough to compete at the Anglo-Irish stock judging competition on four occasions as part of the Irish team.

The Irish Limousin Society gave me the honour of judging at both Tullow and Roscommon show and sales. I think I really like the more intricate part of showing; you must form a connection with the animal.

You can tell a mile off if a handler is nervous; animals pick up that energy. I am a very competitive person.

Generally, there is an obvious first and last, and it is for the middle spots you really must work. You need to know how to emphasise the stronger points of the animal you are showing.

I am most passionate about the animals themselves and their bloodlines. Also, I love getting to know their different personalities and seeing different behaviours and traits their dams have passed on.

I also really love when you find the right bull for your cow. Farming can be cruel in that it is a nine-month wait to see if you have matched correctly, and in those nine months, euro star indexes, which have become so vital today, can change so much. 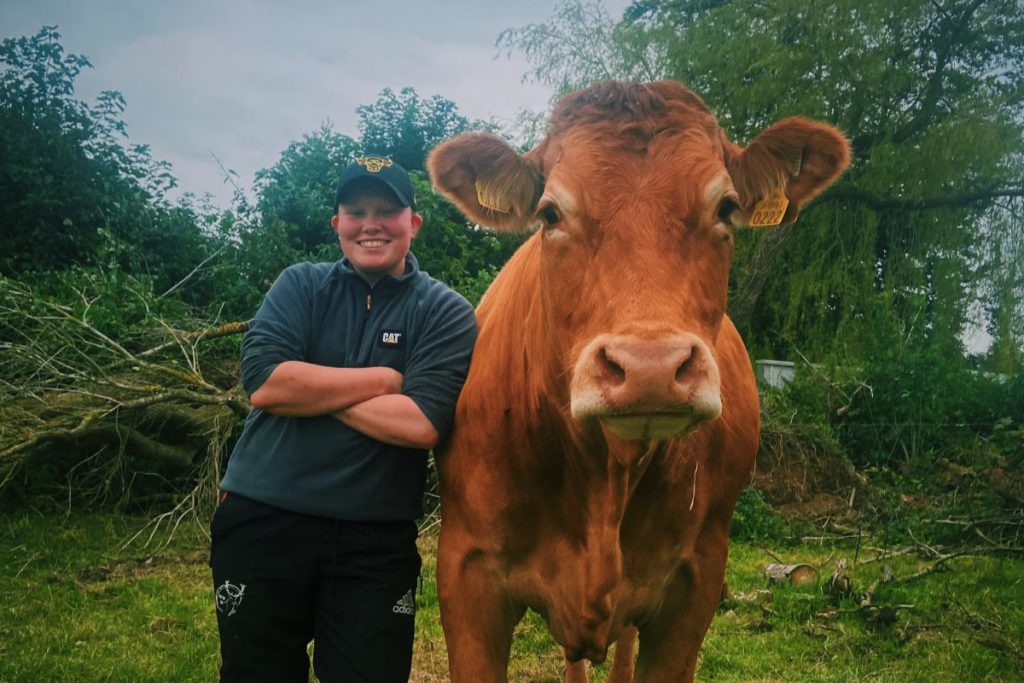 I am a business studies student at University of Limerick.  I have helped at the Roundhill herd of Tim, Doreen, and Katie Corridan for the past three summers.

The Corridan’s Roundhill herd is one of the biggest pedigree herds in Ireland. They specialise in polled genetics. It is a much larger scale operation than what I am doing at home. I am learning every day from Tim and Doreen.

Along with helping with general farm work, my main job is halter training the heifers for their genetic advantage sales every two years alongside the Castleview herd.

I like how rewarding it is. Every day you can see some form of progress from day one of just having a halter placed on their head to sale day when you hope all the hard work has paid off.

Also, it was great over lockdown. It added structure to my life. I love being busy and always going and like routine. 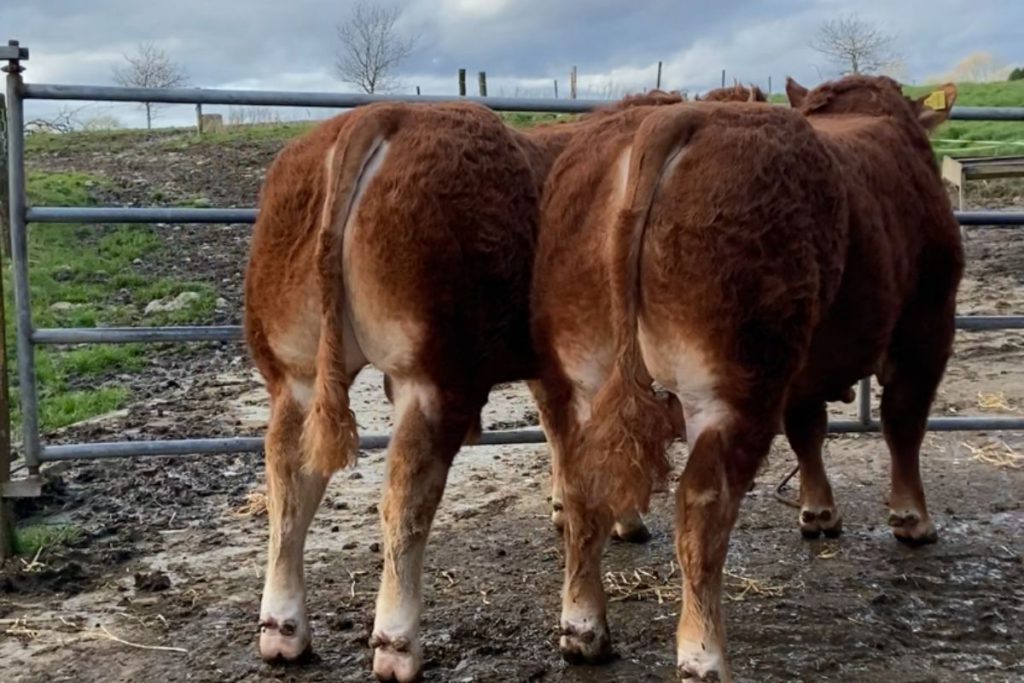 Honestly, I think as a female in ag, you must earn respect, whereas, with males, it is just given. I know dealing with customers, you would often get laughed at or asked where the boss is or even belittled with pet names.

Even just two years ago, I was refused entry to where my bull was in the mart because I was ‘just a girl and I’d only get hurt’.

I think, though, with pedigree breeders, it is different, and I have often been asked my opinion and given responsibility for other people’s stock.

I think I am in a lucky position that in the Irish Limousin Society. We have great female role models regularly performing at the top – such as Doreen Corridan (recently appointed CEO of Munster AI), Sarah McElligott, Teleri Thomas and Marie Louise Ryan, to name a few.

Like anything, it is visibility that is needed to change minds and inspire. Some fantastic shows like Clarkson’s Farm and This Farming Life show ladies are doing the same work as their male counterparts.

I think I am always going to be involved, but more than likely on a part-time basis. Farming has and hopefully will be my escape.

I do not think I would enjoy it as much if I relied on it as a sole source of income with all the pressure that would bring.

There are never two days the same and always opportunities to learn. The best days give memories and worst days give lessons,” the Limousin breeder concluded.

- Advertisement -
Previous article
Just under €18,000 for bitch at online work sheepdog sale
Next article
‘The suckler sector is not the problem’