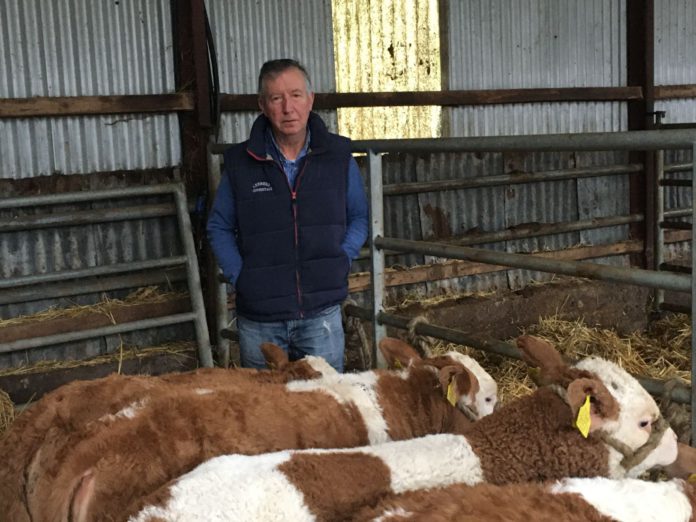 As part of our Suckler Focus, That’s Farming speaks to John Finnegan of Leeherd Simmentals.

John Finnegan, Coachford, County Cork, established Leeherd Simmentals in 1982 with Hibernian Dervilla who had a bull calf at foot.

The calf was a first prize-winner in Cork Show. The cow bred Leeherd Nadrid in 1983, and she proved to be a breeder of great females who stayed in the herd for many years.

The part-time farmer is employed by O’Donovan Engineering, a family-owned company located in Coachford, which specialises in the design and manufacture of superior quality, innovative handling equipment for cattle, sheep, horses, and pigs.

“The driving force behind me are my sons, David and Mark. They are also big into the Simmental breed, and we try to produce top quality cattle and what the market wants,” he told That’s Farming. 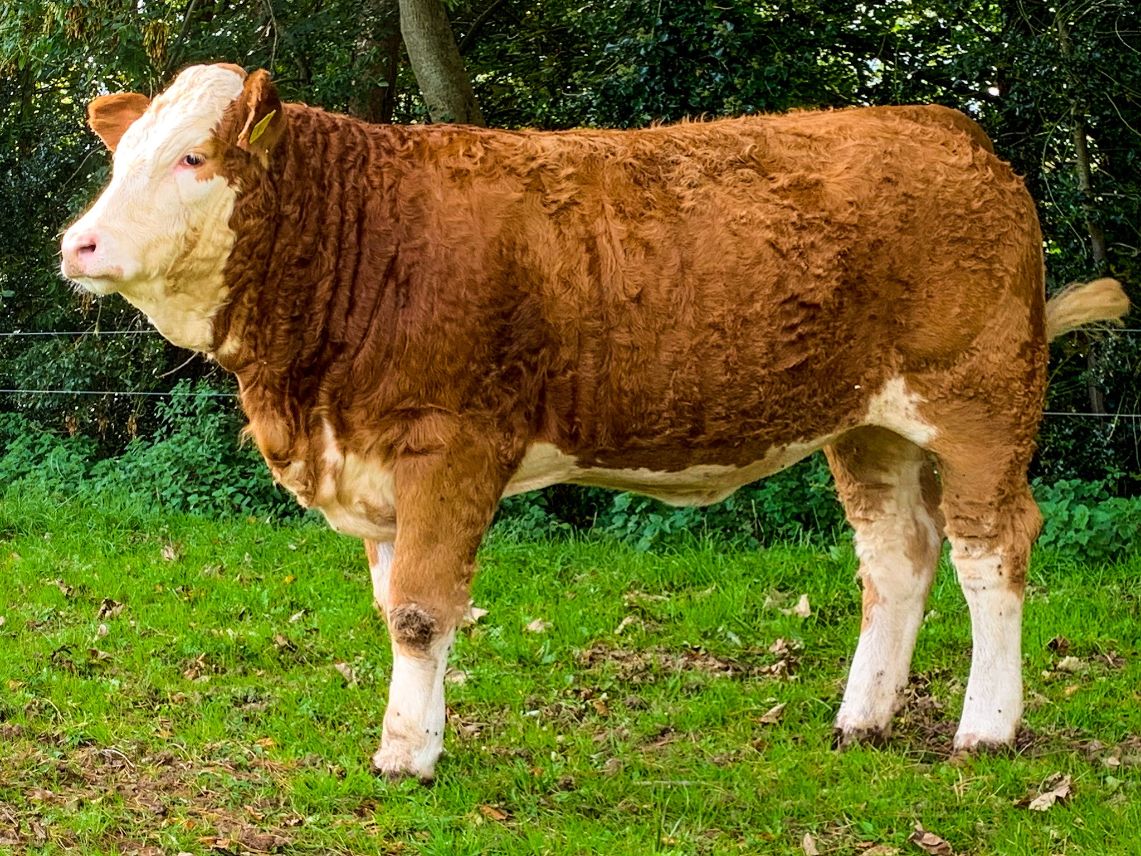 In his 39th year of breeding Simmentals, John has doubled suckler numbers in recent years and now farms 25 pedigree breeding cows and followers. In total, there are usually 60 pedigree animals on the farm at any time.

“We’ve always kept a few commercials in the herd, but these have been gradually replaced as we increase pedigree cow numbers. We have grown the herd by retaining best females and a few select purchases in the early years.”

Their Kitty line, which makes up 50% of the herd, goes back to Rue Cindy’s purchase, from the Bateman family in Riverstick. Lackabawn Hanna in 1999 from the famous herd of Matt Riordan in Millstreet.

She bred a Tully champion in 2011, and other bulls that sold into some great suckler and pedigree herds. Ballyedmond Wilma, Princess and Snowdrop from Tom O’Riordan in Midleton were three heifers purchased between 2005-2010 that have left Leeherd Simmentals with excellent dam lines.

Since 2010, female purchases have been limited to single numbers over that time, to maintain a closed herd, with the exception herd sires. 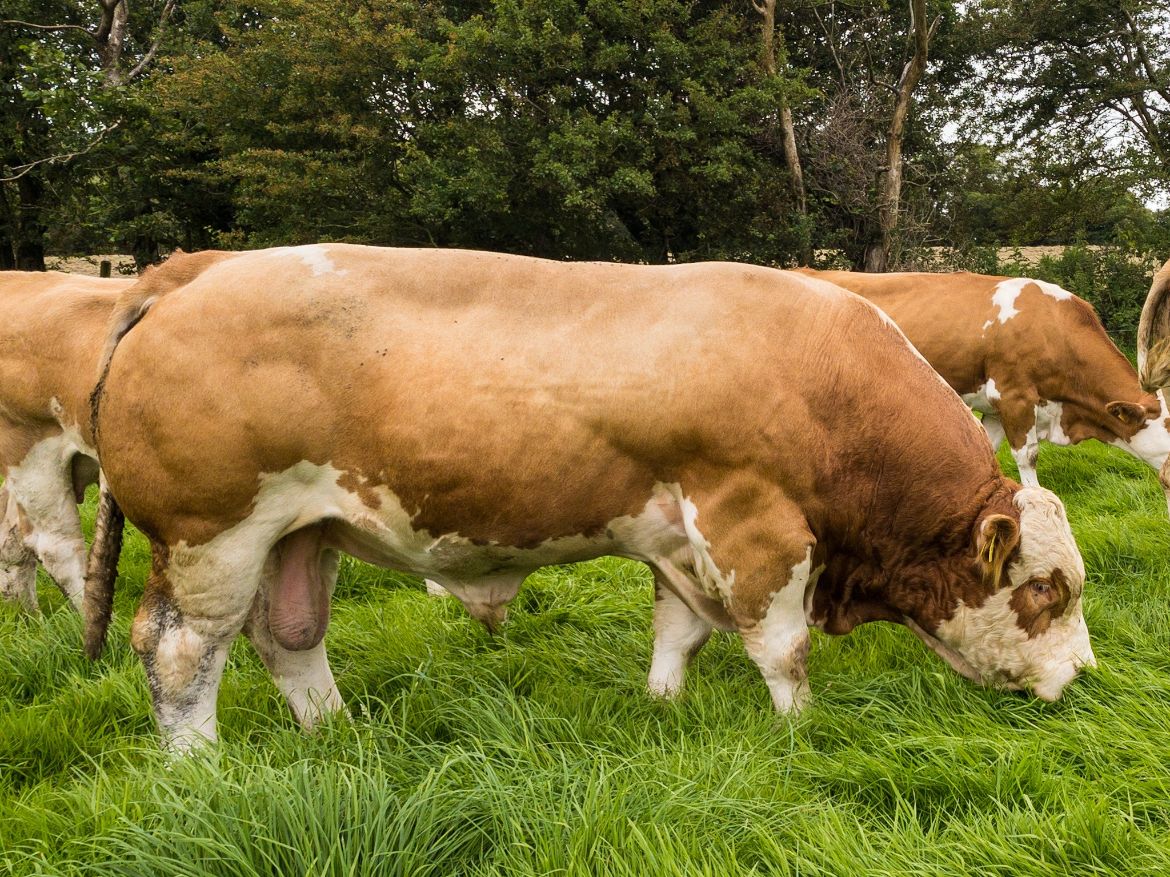 In John’s opinion, Simmentals are the number one suckler cow. He feels no other breed can match the ability to produce a heavy weanling on milk alone.

“A Simmental cow is fertile, low maintenance with a docile temperament and an ability to calve herself. The modern Simmental weanling can match and beat any breed for growth rates and feed efficiency, producing a carcass that meets market requirements at an earlier age.”

“Feed efficiency and age at slaughter are becoming key traits. They are already vital in terms of reducing input costs on farms, and they will be vital to the climate agenda going forward.”

Calving takes place all-year-round on this farm to ensure a 12-month supply of pedigree bulls and heifers.

“We need a supply of bulls all-year-round, in the early spring for local dairy customers looking to put a bit of value in the dairy-beef calf, they like a strong fit bull ready to go to work and walk long distances.”

In late spring, they calve mostly for repeat suckler buyers and in the autumn for the premier sale and for autumn-calving suckler farmers. The herd’s Simmental heifers are sold at the premier sale in October and privately during the summer.

Any progeny deemed not suitable for pedigree use is sold through their local mart in Macroom. 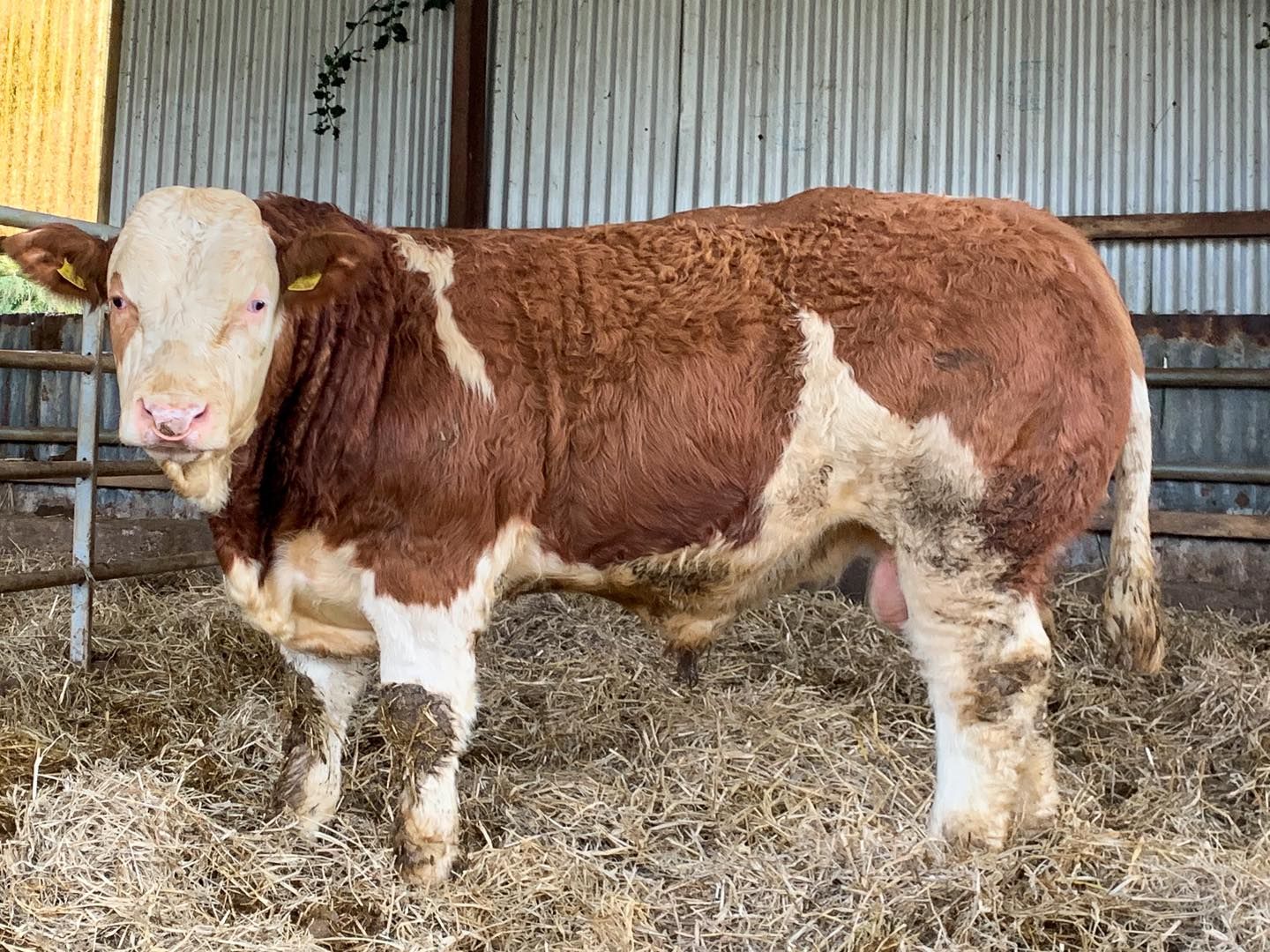 The family strive to breed a cow with length, natural shape across the loin and down into her leg.

The cowherd must breed the bulls, and it began with shape and style. Cows must have excellent feet, good milk and a small udder making it easy for new-born calves to suckle.

“She must be wide on the plates with a good pelvis, so she can calf unassisted. We run our pedigree herd on a commercial basis, and she must be able to wean a heavy calf on a grass diet. Most of our current cow herd are bred from Antrim Dubai, who bred all of those traits into his daughters.”

Herd health is critical to them; they are members of the AFBI Cattle Health Scheme and have been routinely testing clear of BVD, Johnes and IBR since 2004.

Their herd is run commercially, so grass makes up the largest part of the diet. They operate a paddock system and try to reseed paddocks every year to improve quality.

Over the years the Leeherd Simmental’s have sold stock to all parts of the UK. Overseas buyers are usually very active at society premier sales.

“We retain 4-5 heifers each year. We look after them as a priority group, so they hit weight targets to calve successfully from 26-30 months. That usually leaves us with another 8-10 quality heifers which we sell through the society sales or at home privately.” 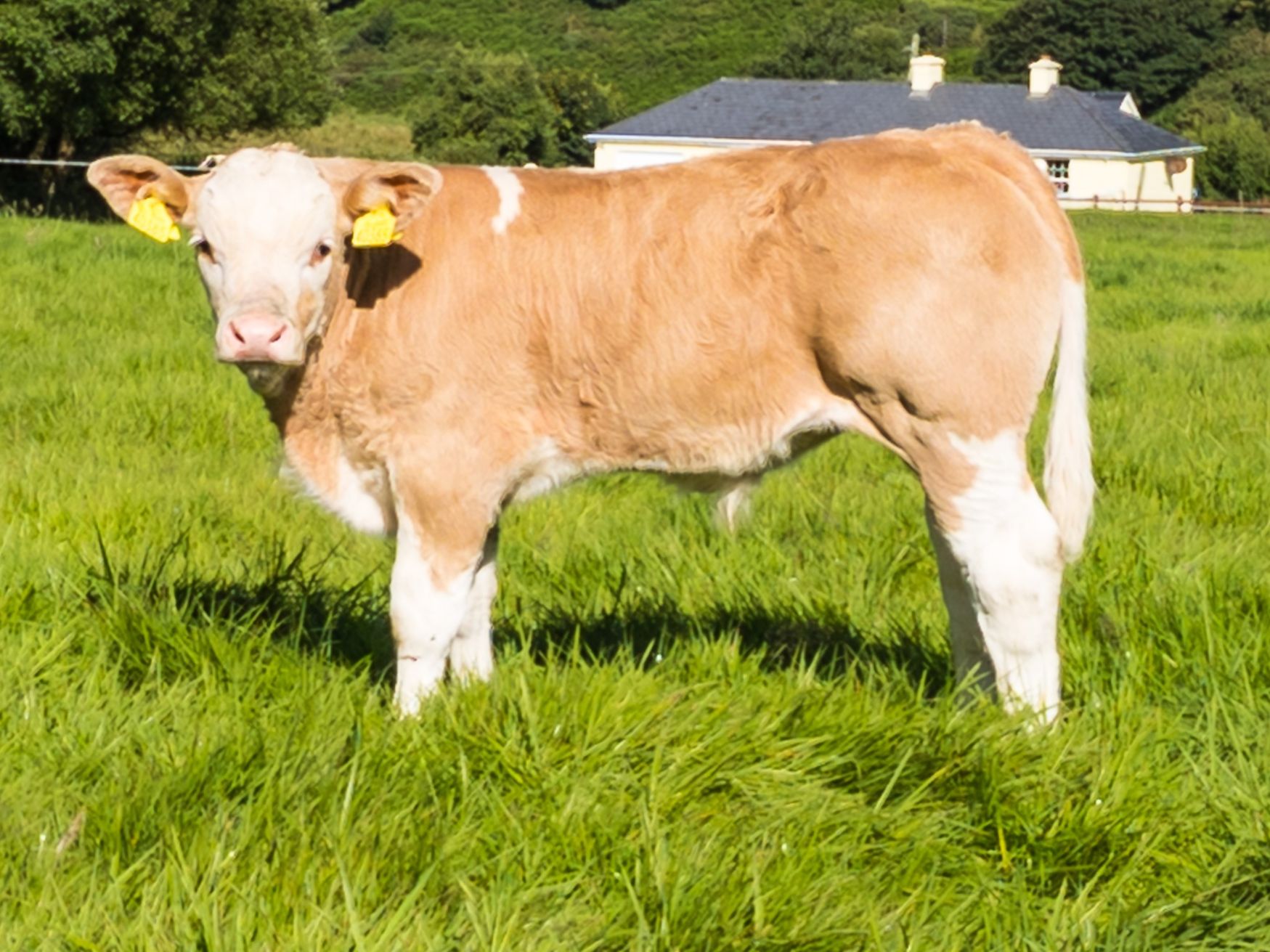 In the 80s and 90s, AI bulls such as Hamlet, Hast, Siegfried, Dovea Sir Ivor, Mountroyal Western and Pippen all bred well for them.

In the late 90s and into the 2000s, they saw the demand from suckler herds for beefier-types Simmental as the breed developed into what it is today, the number one choice for suckler replacements and excellent terminal traits.

Since then, they have looked to maintain that shape in the cowherd, and find bulls to complement and improve each generation of cows. Since 2013, they have bred over 80% to stock bull service.

“We find using a top-quality stock bull helps put a uniformity into the cow herd, which isn’t as easily done through 100% AI. You have to trust your instinct as a good judge of stock when buying a bull, and the last two herd sires Antrim Dubai and Dermotstown GMac have bred exceptionally well for us.”

“We are always looking for the next bull at every sale or show we attend or at any pedigree herd visit we can take together. For example, the day we bought GMac, we didn’t need a bull just then because Dubai was still young and fit. But when Dave & Mark saw GMac at Tullamore Show in 2016, they knew there was something a bit special about him.”

“They were proven right; he has bred some excellent progeny for us, both bulls and heifers, very consistent and all with the shape and correctness that we look for in our herd.”

NCBC purchased Leeherd Harry in 2017 at the spring sale in Tullamore. They then acquired Leeherd Jake privately in 2019. Both bulls were on the GeneIreland beef panel in 2018 and 2020.

Furthermore, they purchased Leeherd Lynx, who is on test at present, at the premier sale in Roscommon last October 2020.

They do not carry any cows that cannot produce a calf every 12 months. If they calf a cow in the spring this year she must calf the same time next year, or she’s gone.

“Normally, we cull cows because of age or if they are not producing progeny to our standards. We had one cow who went to 17-years before we culled her because she was fertile and produced a good calf each year. What we try to get is 8-10 calves of out of a cow in her lifetime.”

“Also, we cull for fertility, poor feet or udders. If a pedigree herd culls correctly, then the bulls which we sell into commercial suckler herds are bred from cows who are held to those standards and should breed only good traits in their new herds.” 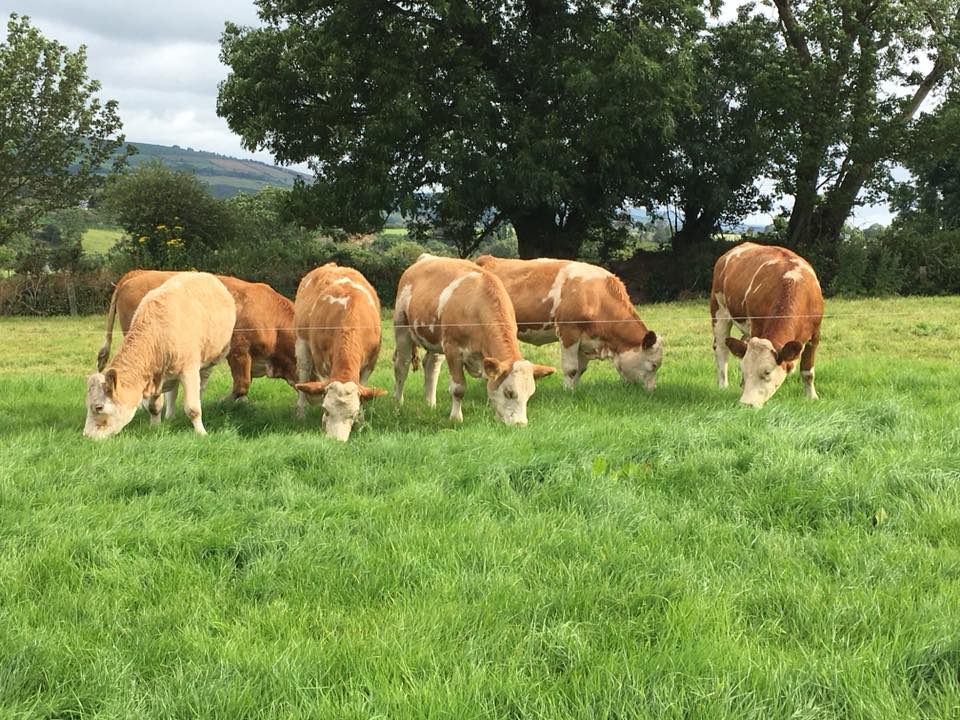 Leeherd Simmentals successfully strive to have docile, easy calving cattle. Going forward, they would like to keep improving what they have, hoping that each generation of cows is slightly better than the last.

They believe quality cattle will always command a premium, whether pedigree or commercial, and that the Irish suckler cow has a great story to tell consumers;

“She can rear her calf naturally on even the most marginal of land, producing a healthy protein source in an environmentally friendly way. Suckler farming sustains local communities and local economies. Our suckler beef should be a premium brand, and I hope it will be soon.”

“A lot of suckler farmers nowadays have off-farm jobs, so they want low maintenance cattle. Added to this, we try to have shape and correctness in all our cattle. It is not enough to just have below-average calving difficulty; you must match that with genetics which would not compromise on growth and performance. So, you are trying to identify that bull to breed both.”

“There is room for data and indexes in the beef herd, if used correctly and if we focus on those few core traits which improve the bottom line. But these indexes and ‘stars’ should only ever be used alongside a good eye for judging stock in the flesh.” John concluded.

- Advertisement -
Previous article
‘Don’t let the Leaving Certificate define who you want to be’- vet med student
Next article
Farmer’s Diary: A muzzle for Peadar and a lack of shed space