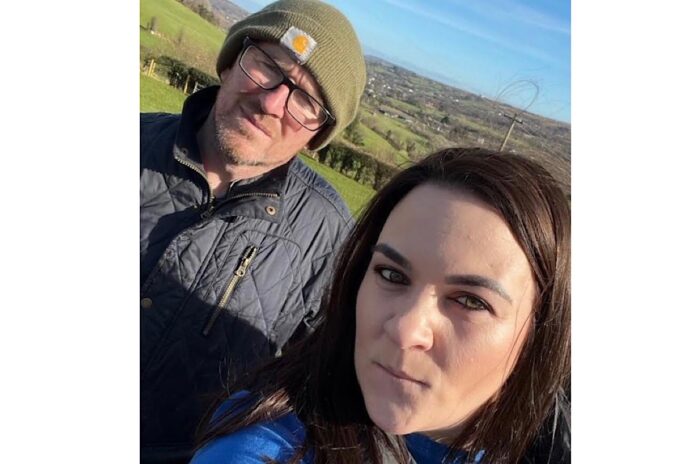 He and his wife, Catherine, have 20 Aberdeen Angus suckler cows, 180 Perth ewes and 120 Mule Leicester ewes.

The sheep graze on 900-acres of hill-grazing land, and the cows and calves are fed on the rest.

He founded Kilpheak Farm’s pedigree Angus herd by purchasing five cows and calves from Sidney McDaid in Letterkenny, which his wife saw advertised on DoneDeal.

He continues to invest in five heifers each July from breeder, James Mallon in County Derry.

“I was born on a farm, and that has been in my blood since I was a young person. Sheep was always the biggest enterprise,” Sean Devine told That’s Farming.

“My wife is from London but moved to Ireland in 1999 to attend Trinity College in Dublin. We met in Letterkenny just before she started there.”

“She has spent the last 18 years working as a journalist and started her own business last year. However, she has been involved in the farm for a long time.”

“After we had our first child in 2013, my wife completed the Green Cert at Ballyhaise Agricultural College. For someone who did not come from a farming background, it did not take her long to learn.” 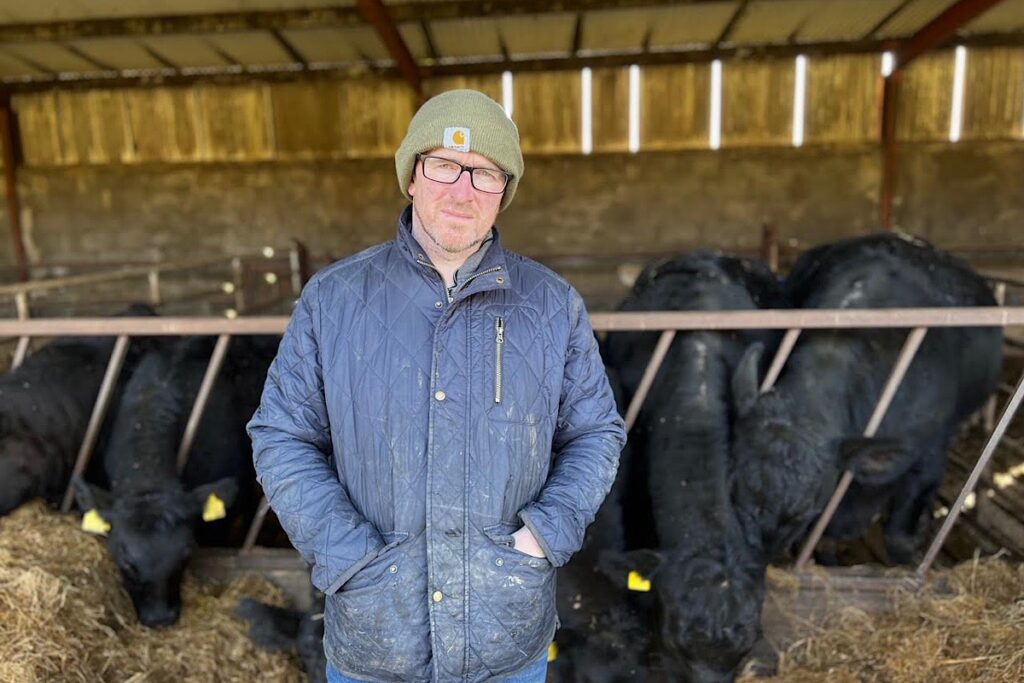 The cow-type the family originally bred in their commercial herd was a Charolais-cross animal.

Today, the Devines ideal cow is an Angus with good milk, easy calving, and good size.

“The main reason I focus on Angus cattle is because of easy calving. I find that with Angus cattle, the one person can do the job. Also, I have seen plenty of times where I have not had to get involved, and they have calved themselves.”

“My children are very young, and my brother, Joe, helps on the farm, but only when he is not working. So, I needed to do something that makes things easier for me to manage by myself.”

The farm previously used a Charolais stock bull on commercial cattle but has switched to 100% AI this year, with Coonamble Elevator E11 (S2330 being their sire choice.

The family use a CIDR programme, and it operates by the farmer inserting a CIDR into its cows.

“I used sexed semen on one cow to see how it would work, and I want more heifer calves. It is something I want to concentrate on, but, currently, the choice of Angus bulls is limited for sexed semen.”

“The simple reason I do not have a stock bull is that I want more control when my cows are calving and what type of calves they are having. There is also the safety element to keep in mind too.”

“The other reason is that you can buy a stock bull that looks great in the ring, but you can bring him home, he can serve your cows and end up with calves that might not be great. However, when you are using AI, you have a choice.”

Sean shared his view on the genetic pool available to breeders.

“The genetic pool is good, but I think you can still have a great calf out of a bull that has not got five stars,” the owner of Kilpheak Farm added.

“I feel that is the great thing about Aberdeen Angus is the quality and choice that is there when it comes to AI.”

The bought-in in-calf heifers calf each September, and the family aim to calf their replacements at 24-months.

“I like heifers to be more mature and filled out when they are calving.”

“My calving on the farm for the last two years has been so much easier, and it has been half the job it used to be because of the way the Angus cows calf.”

“At the same time, I do not like missing cows calving because I like being there. I have only missed one or two, and while it is a relief that they can calf themselves, there is always the chance that something could go wrong.”

“The most important thing for me is the first three litres of colostrum you get into a calf. That is the main reason that I keep a close eye on them and try not to miss any of them being calved.”

“My cows tend to all calve during the night, so I make sure calves have had a suckle of milk before I go back to my bed; well, I suppose that gives me peace.” 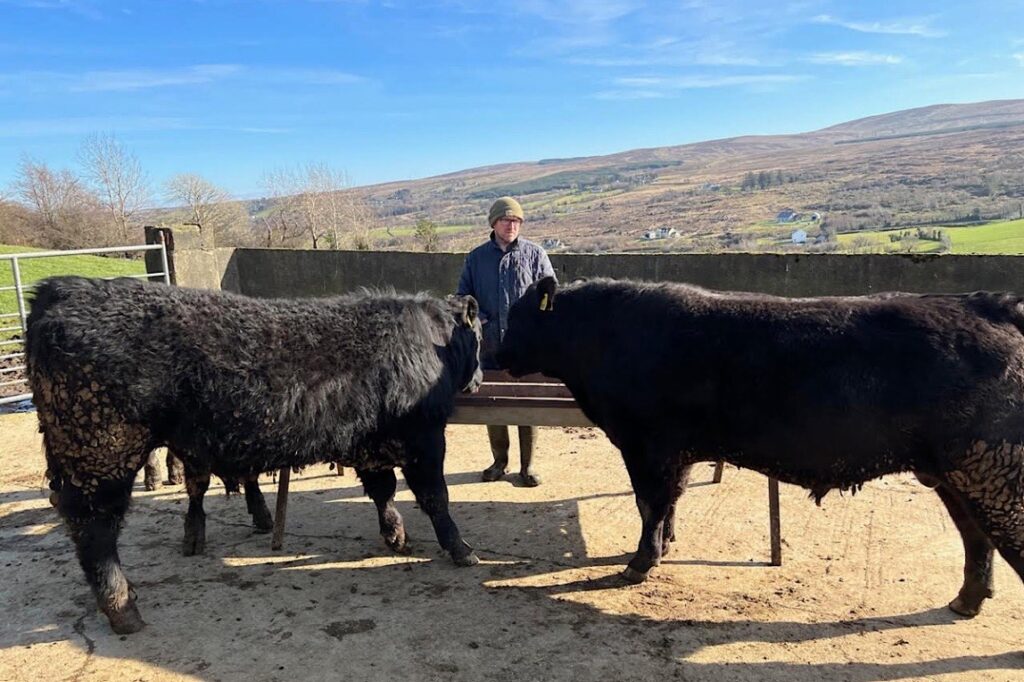 The Devines aim to keep the same number of replacements as cows they are culling, e.g., four heifers, and sell the remainder at Raphoe Mart.

The farm has a strict culling policy for cows that reach nine-years-old and sends them to Raphoe Mart.

The family sells bulls for breeding to dairy farmers on-farm from 9-months, and sell the remainder as 11-month-old calves at Raphoe Mart.

“There is good demand, but I think it is because they are Angus bulls, dairy farmers are reluctant to pay what they are worth compared with what they would pay for a Limousin bull.”

“But, it is my opinion that Angus is a better breeding option for a milk cow.”

“Demand is good because a lot of dairy farmers have to change the quality of their calves. I think if you are calving down from a good Aberdeen Angus bull, he gives a good quality Angus-cross calf, and that is what is wanted.”

In Sean’s eyes, it takes “money” and “perseverance” to get yourself to where you need to be in pedigree breeding.

“Everybody will say that this is a great bull, but to me, everything lies in a cow.”

“The bull can have whatever you want, but if you have not got a good mother and she has not got that shape, you have nothing.”

“The bulls are there, but you need to put it into a good cow.” 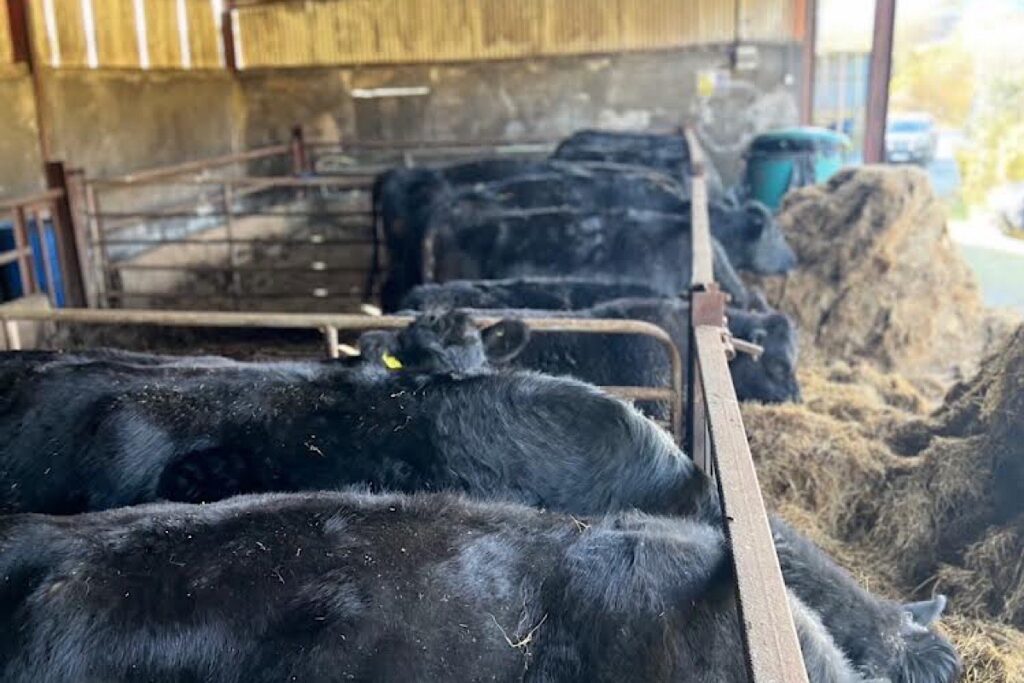 The family aim to keep improving their livestock and said they have reached their limit for suckler cows – with rising input costs.

However, they added they can expand sheep numbers – due to the farm being mountain-type nature and more suitable.

“If dairy herds keep going the way they are going, I think we will not have a suckler herd. I think every young person does not want to deal with calving cows at night.”

“I feel the market is flooded with Friesian calves. Most marts I go to, you are sitting there an hour-and-a-half watching Friesian bulls making €500 and €600 before your own comes through.”

“I know all cows have to have calves, but I do not see the suckler herd surviving.”

“Farming has become harder and less enjoyable over recent years with increased costs and the amount of paperwork involved.”

“I think anyone who has an option to diversify should do that. We have plenty of tourism-related opportunities here in Donegal.”

“For example, I have been renovating the family farmhouse to turn into a holiday rental property, and there are other projects that we are working on.”

“There is a perception among a lot of farmers that unless you are killing yourself working, at all hours of the day and night, then you are not achieving anything.”

“I am still young, and I want to spend as much time as I can with my family, so the focus now is definitely on finding ways to work smarter, not harder, to make a decent living.”