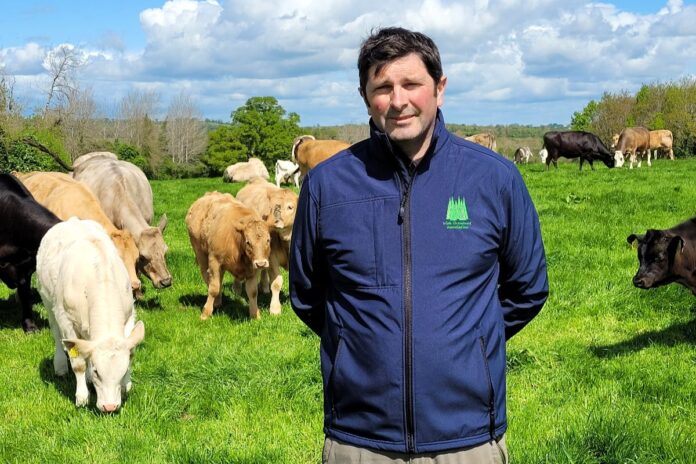 Jimmy Madigan’s farm in Ballyhale, Co Kilkenny is mixed in nature, with tillage land, forestry, and a herd of 100 autumn and spring-calving cows and their followers across 76ha of grassland.

Jimmy and his wife, Ann-Marie, who have four children, are the only labour units on the holding.

They calve cows and heifers from December to March and August to September each year.

They select replacements – by a maternal Charolais stock bull – from the crop of heifers from cows that calve in autumn.

Furthermore, they finish the remainder at 19-20 months, and they bring males to beef in an under 16-month finishing system; they also finish additional bulls that they buy-in in the same system.

The Kilkenny-based farmer moved away from steer beef in 2017 to grow the breeding herd on the farm.

The under 16-month bull system leads wintering bulls for one season only.

He calves these down in the autumn time to the maternal Charolais stock bull; heifers obtained here will enter his spring-calving herd.

He also uses Limousin AI on his home-bred heifers and these calve in the springtime. Two terminal Charolais stock bulls run with the spring herd during the breeding season.

While this breeding strategy may differ from the norm, it has worked well for Jimmy down through the years.

Last year, the herd’s calving interval stood at 369 days with an impressive 0.9 calves/cow/year.

For Jimmy, focusing on cows that have an ample supply of milk to feed their calves and utilising as much grass as possible has always been the key to success.

The herd grazes in an 18-paddock system – operating in a ‘grow in three weeks, eat in three days’ system.

The paddocks are serviced by excellent roadways, which make the route to pasture as labour-free as possible.

With an early turnout in spring, Jimmy takes advantage of the long grazing season before weaning.

Pre-weaning, he creep-feeds spring-born bulls, while he does not feel heifers any meal.

He then houses bulls in November; however, heifers return to grass, and he grazes them until weather conditions force housing.

While grazed grass is Jimmy’s number one priority during the growing season, he harvests excellent-quality silage to ensure high growth rates during the winter and finishing period.

He maintains that without excellent-quality grass silage, the under-16-month bull system would be difficult to operate.

Last year’s silage crop came back at 76% DMD when tested, which allowed weanlings to achieve a 0.54kg/day growth rate for the first two months of housing.

Regular weighing complements the beef system, and once bulls hit the target weight of 480kg, they are then moved into the finishing regime.

In terms of slaughter, 2021-killed bulls had an average carcass weight of 425kg, while the heifers averaged 347kg – with 89% of the feed coming from grass or grass silage.

To achieve this top-quality silage, Jimmy harvests his own with a mower, tedder, baler, and wrapper.

The same land is never cut year-on-year and ground earmarked for silage is grazed off early in the year, with 2,500 gallons/ac of slurry applied.

At the start of March, he applies chemical fertiliser and – once the weather allows in May – he harvests it.

Reseeding, along with keeping soil fertility at optimal levels, has also played a “pivotal” role on the farm over the years. He has reseeded ground in the last decade.

Jimmy is now ready to explore the different options available when it comes to optimising nitrogen efficiency and plans to sow clover this spring.

He believes that for suckler-to-beef farming to be successful, there are a menu of criteria that must come together.

At the top of the list are grass and top-quality silage. He also highlights adequate facilities – especially with a bull finishing system; and a fertile, milky cow that can produce and rear a calf every year.

Jimmy Madigan will open the gates of his farm to the public as part of this year’s Irish Grassland Association Beef Farm Walk.

- Advertisement -
Previous article
‘Optimal’ prices of up to €2,170 at Tuam Mart
Next article
Fed up of spending time and money on traditional fencing tasks?