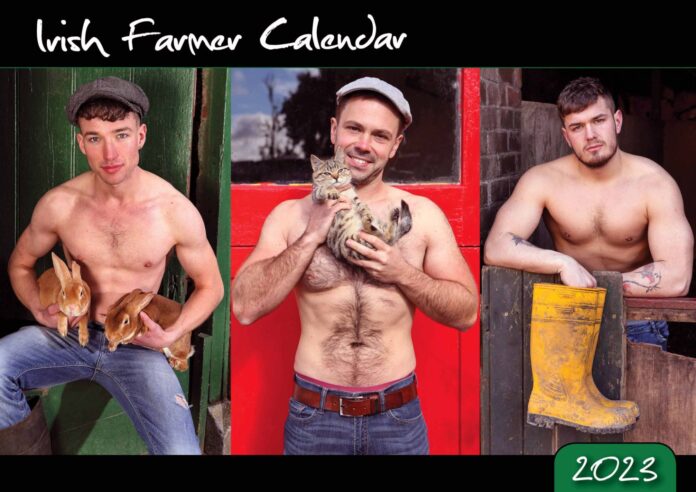 The 2023 Irish Farmer calendar, which is now in its 13th year and features “hunks of agricultural charm”, is now available for sale.

Its creator, Ciara Ryan, says the calendar has always been a “quirky head-turner”, previously beating One Direction, Conor McGregor and Justin Bieber in the calendar charts, not to mention Cliff Richard and Daniel O’Donnell and achieving international recognition with ‘Irish Farmers’ the book, published by McMillan (Dan Brown, Jackie Collins publisher) in the US.

She told the publication that the calendar was shot in four locations throughout the last two years, primarily Cornstown House, Ashbourne, Co. Meath, which specialises in alpaca trekking.

Ryan added: “Farmers appear in their full (or at least topless) glory along with rabbits, goats, dogs, ducks, hens, sheep, kittens and an alpaca. Even Santa Clause makes his first appearance in the calendar.”

“The first order of the 2023 calendar came from Japan, followed by Switzerland and Finland.”

Ryan explained that new images had not been published due to Covid restrictions last year, so this calendar is a combination of shoots which took place as early as 2019 and as late as October 2021.

“This year, the calendar is a special edition which features 23 images rather than the usual 12 images.”

“So far, this has gone down a treat with fans, and we see new orders coming in every day from all over the world. It is great to see the calendar has universal appeal,” she concluded.

The calendar is NOW available from www.farmercalendar.com for €12.99 and will be available in Calendar Club stores in Ireland and the UK from October.

- Advertisement -
Previous article
Photos: 22 in-calf heifers with ‘power, shape, size and style’ for Balla Mart
Next article
Weanling heifers to €2,270 and bulls to €1,680 at Castlerea’s show and sale