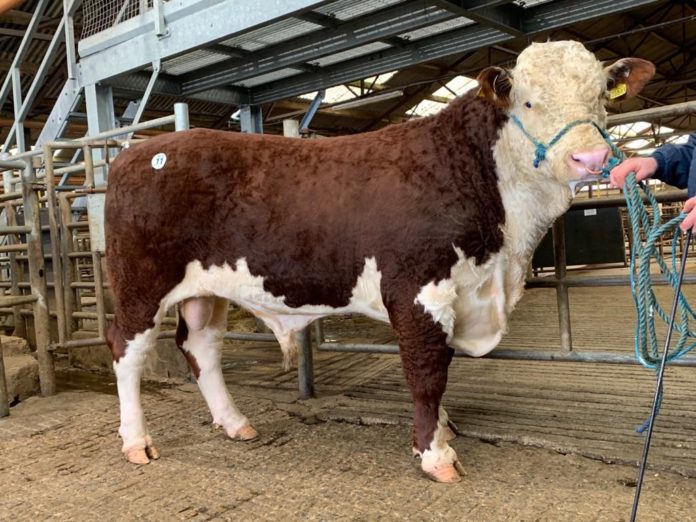 According to a spokesperson, “home trade is remaining strong, as only 23 of the 38 bulls catalogued showed up for sale with the remaining sold off-farm before the sale”.

“Home sales are particularly strong this year and quite early compared to last year, with many farmers opting to buy bulls in breeder’s yards.”

“Well done to all exhibitors & buyers on the day. Thanks to Irish Hereford Prime, who also sponsored €200 to the five highest-priced bulls on the day.” the spokesperson added.

Two breeders shared a top call of €3,300. First up was Padraig McGrath’s (Kye Herefords) Kye Morgan 883. The July-2019 Gageboro Morgan son is a four-star replacement index bull with a five-star figure for milk. Morgan was fertility tested, and a commercial farmer from Cork snapped him up.

New breeder, John Hartigan of Hayfield Herefords, Limerick, had a very successful day out for his first sale. Hayfield Maxulius George, with a tag number of 001, sold for the same price tag.

Described as “a tremendous bull with a pedigree to match”, – George is Trillick George son, with a four-star terminal and four-star replacement index bull.

It was well worth a second day out for Rathnollag Racer, bred by Sinead Conry of Rathnollag Herefords, Roscommon, who changed hands for €3,000.

Born in September 2019, Racer is an F.H William son and bred from a Steil Gerard dam. This bull has both a four-star replacement & four-star terminal index and being fertility tested and has served cows.

There was success for the Aliehs Hereford herd in Kerry when breeders, Timmee & Sheila O’Sullivan, found a new home for Aliehs Harry 6 at €2,700.

Bred from Kye Harry 697, a Free Town Hotspur son, Harry is a four-star replacement and four-star terminal index bull with stars across the board for carcase weight and milk.

Moyclare Sander, bred by Michael Molloy of Moyclare Herefords, Offaly, also sold on the day for €2,500. Sander, born in June 2019, is a Free Town Nadal – an easy calving sire – son.

You can read a report from the society’s Tullamore sale and Nenagh sale.