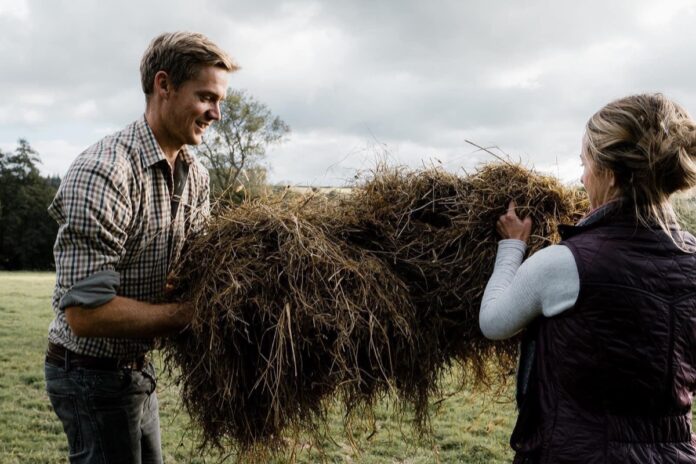 In this week’s Suckler Focus, That’s Farming speaks to UK Hereford farmer, Jack Burgess. We discuss establishing a pedigree Hereford herd with his wife, why they selected this breed, their aim for progeny, and future plans for the Clarence Herd.

When Jack Burgess was young, he told his grandparents, that he was going to breed Hereford bulls.

He is fulfilling that dream, notching up notable success by securing respectable price tags for progeny from his renowned Clarence Herd.

He spent his summer holidays on his grandfather’s farm, where his passion for farming blossomed.

His maternal side of the family are farmers; however, along with his wife, Gemma, he started from scratch five years ago.

Jack works off-farm as a full-time firefighter, and Gemma runs a beauty business and shepherds hut from their orchard.

The farm comprises 12 pedigree Hereford cows, from horned bloodlines and has expanded slowly by retaining replacements.

“We intend to keep expanding up to a medium or even a large herd; do not tell Gemma!” Jack jokes.

The couple owns 30-acres and rents a further 80-acres over the calendar year. They cut hay for local liveries, but will scale this arm of the business back as their own herd increases.

The Clarence Herd consists of pedigree horned Herefords, which are dehorned, with some traditional bloodlines.

“I wanted a smaller, stockier cow that could convert poorer quality forage into protein. My main aim is to breed bulls for other farmers to use for breeding.”

“Currently, we have a good number of dairy farmers buying bulls at 12-months old.”

“We bought two in-calf heifers to commence the herd from Oakleaf Herefords. This purchase was followed by a further two from the Hustyn Herd in Cornwall and two from the Hillfield Herd in Dorset.”

“We intend to use our own breeding from now on unless I see something I cannot resist.” 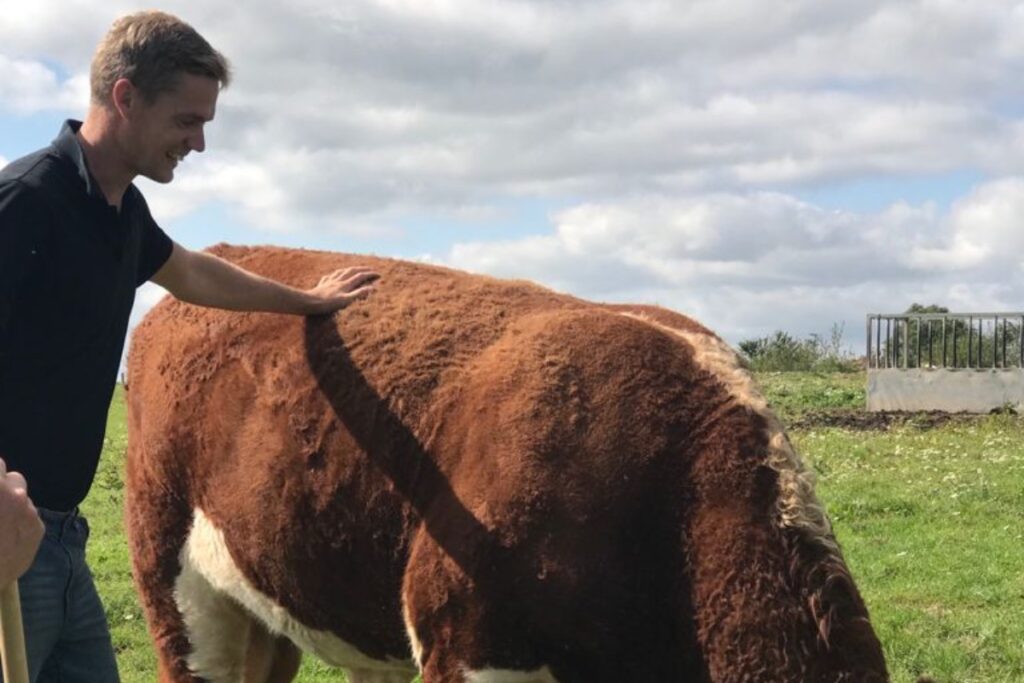 Initially, they sourced in-calf heifers to kick-start the foundation of the herd.

Following this, Jack uses AI for a select number of females, and a team of younger stock bulls.

In 2020, Jack sourced a stock bull from the Anhay Herd in Cornwall, which he will use until 2023.

“We calve our cows between December and March. Ideally, we will calve in January to February time to have bulls ready for the following spring and produce more milk for better-grown calves.”

In addition to this, Jack plans to dry cows off around October with the intention of reducing the likelihood of disease incidents.

Jack aims to produce a shorter, stockier cow, in the region of 650kg that has “good” milk and easy-calving traits.

“We seem to have cows with more white markings than most but that was not necessarily the desired trait.”

“We are extremely fussy about maternal traits and having a cow that puts everything into the calf, rather than looking too pretty herself.”

The bull calves produced from the Clarence Herd are sold for breeding. They retain heifers from breeding; otherwise, they are sold as beef boxes locally.

“I aim for a target weight of 600kgs live weight. We sell privately, so exact carcass is not too precise.”

“We try to keep our heifers back for breeding. Moreover, calve at 24-months to prevent them from getting too fat.”

“A system of calving at 24-months has been great for us in terms of efficiency and managing the size of cows. We aim for around 80% of mature weight at breeding by calving.” 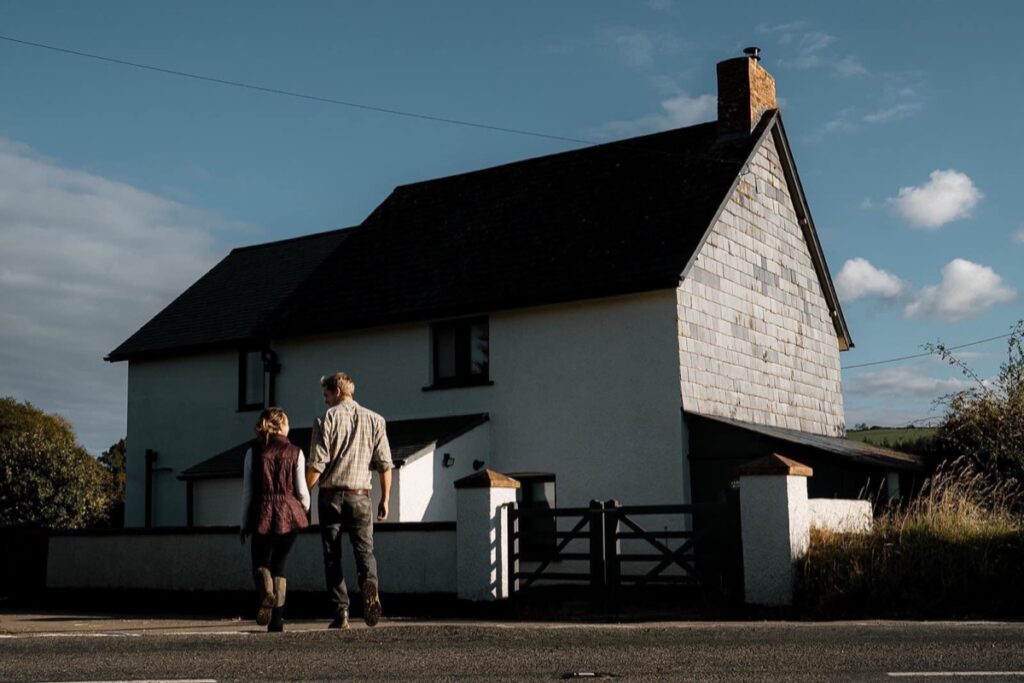 In terms of grassland management, the Clarence Herd adopts a mob grazing approach with the main herd.

Mob grazing is a short duration, high-density grazing with a longer than usual grass recovery period.

“Animals are moved daily using electric fencers before and after. We try to eat a third, trample a third and leave a third, with 40 to 60 days rest between each patch.”

“We are all low-input in the Countryside Stewardship Mid-Tier Scheme and do not use any fertiliser. The farm is also trialling some herbal lay overseeding too.”

Udder issues, calving issues and injuries are the three main reasons for culling within the Clarence Herd.

Jack believes that choosing the right bloodlines to begin with to suit your farm and setup are a key element of running a successful suckler operation.

“The older bloodlines love our low input systems and build soil structure and health. We try to optimise each animal through selling the pedigree stock for breeding elsewhere.”

“The cattle are a pleasure to work with. They are quiet, easy to handle, and currently in demand. I am very proud to see Clarence bulls making top prices at local markets,” Jack tells That’s Farming.

Jack believes that the general perception of comparing British systems to “hugely” distorted figures from abroad is a “huge” challenge to UK suckler farmers.

“We are doing our bit to educate the public about how we can capture carbon and improve the environment whilst producing quality meat.”

“I think that the supply chains in this country are run by too few companies who control the price to our detriment. Local abattoirs and supply chains are a priority for us.” 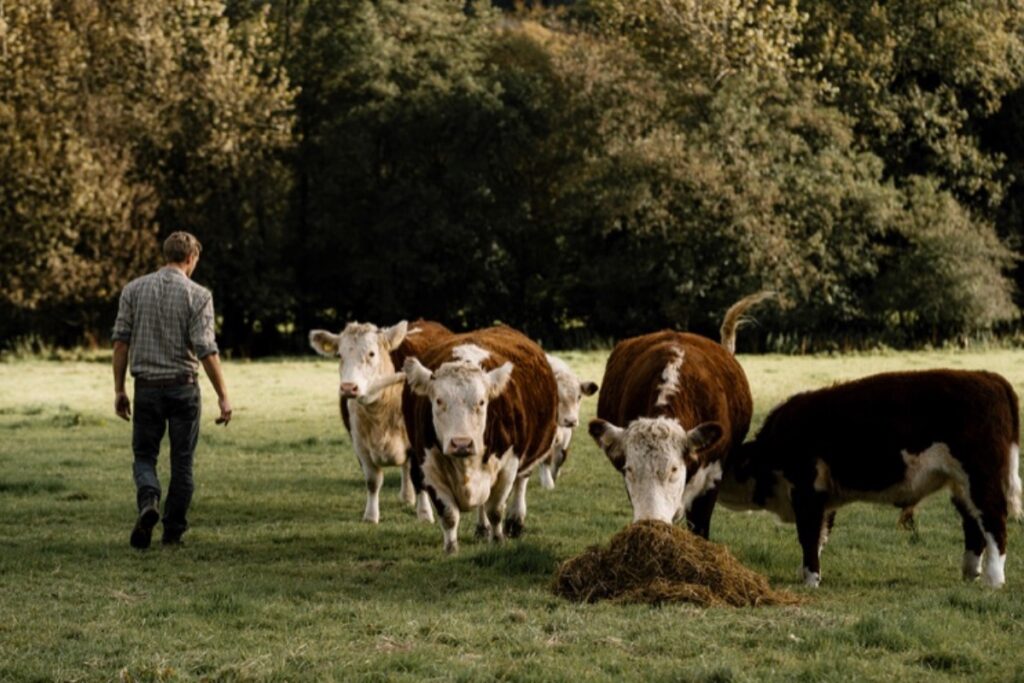 Currently, Jack is satisfied with the performance of their herd. “Currently, we rear a lot of Hereford-cross calves but will try to reduce that in favour of more pedigree cows over the coming years.”

“Last year, we achieved second place in the South-West Hereford Association Small Herd competition. This was a huge compliment from the chairman of the National Association who judged it.”

In the future, Jack and Gemma intend to improve their mob grazing system and even have plans for some outlets to sell their home-produced beef in areas such as pop-up shops, local stores, etc.

“It is important to think of farming as a business. Doing what you have always done may not be the answer anymore.”

“We critically analyse our business annually and are content that our current suckler herd mixed with calf rearing is profitable and sustainable.”

Jack concludes, “We have been fortunate that our brilliant neighbours have supported us and allowed us to rent their land.”

“People actually stepping and helping young farmers is rare. We will be sure to repeat their kind acts when we are in this position one day.”