According to the beef specialist, breeding, and fertility the most important aspects of running an efficient suckler system.

She highlighted that there are several factors that influence the reproductive efficiency of suckler cows.

According to Egan, setting realistic breeding targets for your farm is the key starting point in developing a plan and managing your herd throughout the breeding season.

TF: What financial implications can a delay in getting suckler cows back in-calf have?

CE: Teagasc data estimates that for each day that the calving interval extends beyond the target of 365 days, it costs in the region of €2.20 per cow per day, mainly in feed costs.

What should the process of getting a suckler cow back in-calf consist of?

Cows undergo a period of recovery after calving. The uterus needs time to recover from the calving process and return to normal size.

This would take up to 40 days or longer if there was calving difficulty or uterine infection.

From once, the cow calves until the start of the oestrus cycle is a major factor impacting reproductive efficiency. This is usually 60-70 days post-calving for suckler cows or 70-90 days in first-calving heifers.

To maintain a 365-day calving interval, the aim is to get the cow back in-calf within one to two heat cycles after calving.

What about mineral supplementation and BCS?

The need for minerals in the suckler cow is significantly lower than that of the dairy cow, and in general, molassed mineral buckets are adequate to supply minerals.

Magnesium must be supplied during the tetany risk period. In the event of a deficiency, supplementation rates of trace elements such as copper, selenium, iodine, cobalt, manganese, and zinc may be required.

Body condition score (BCS) at calving needs to be at a herd average of 3.0 for spring calvers as this allows for 0.5 of a BCS loss up to the start of the breeding season.

At the start of the breeding season, a cow needs to be on an increasing nutrition plan with a BCS of 2.5 to give her the best possible chance of going back in-calf.

Thin cows in poor condition or lose a lot of weight post-calving will have a delayed return to heat.

The effects of low BCS at calving are only partially reversed by placing cows on a high nutrition plan after calving.

Should a cow be served the first time she returns to heat after calving?

What is the best time to AI a cow?

Most cows come in heat between 8 pm and 8 am. Therefore, late evening and early morning observations are critical to good heat detection.

Follow the a.m./p.m. rule -– where cows have been seen bulling for the first time in the morning; they should be inseminated that evening.

Cows identified in the evening time should be inseminated the following morning.

What should be considered if using a stockbull when trying to get cows back in-calf?

A bulls fertility status can change from year-to-year. Therefore, it is good practice to have a fertility test carried out on the stock bull, before the beginning of the breeding season.

It is estimated that twenty-five per cent of stock bulls are sub-fertile.

Watch the bull working to check he is serving cows correctly. Record when you see a cow being mated and watch for signs of cows coming on heat repeatedly.

If possible, rotate bulls or scan cows early so that you can identify an infertile bull or sub-fertile early.

When should you scan the herd?

You should consider scanning your cows at least 35 days since the last cows in your herd could have been served.

When should the breeding season start and finish? 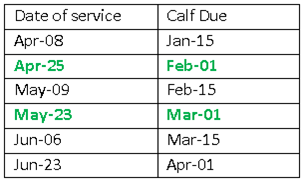 Calving rates – what targets should suckler farmers be striving to achieve?

The overall breeding targets of a profitable herd include;

When should you decide to cull a cow?

Before the breeding season starts, you should identify cows that need to be culled and do not breed them.

These cows may consist of a late calver, cows with poor calves/insufficient milk, older cows, cows with health problems or poor temperament. After scanning post-breeding cows that do not prove in-calf with poor fertility should be culled also.

Can you please provide some tips for getting late-calvers back in-calf?

A proportion of cows may fail to show heat by 60-70 days after calving and will be later calving the following year unless you undertake action. There are a few options.

For late-calving cows, cow-calf separation should begin when cows are 30 days calved and should continue for 2-3 weeks, with calves allowed to suckle morning and evening.

About 85% of cows will exhibit heat by the time they are 50 days calved. It is important that calves are at least 50 metres from cows but not necessarily out of sight or earshot.

This is a cheap, non-hormonal option but demands time and appropriate facilities (very good fencing, etc.). Calf removal/separation can equally be applied to cows that are longer calved and are not cyclic.

The use of a progestagen device such as a Delta- PRID or CIDR for eight days is capable of inducing heat in about 80-90% of anoestrous cows.

Why do first calvers, in some cases, take long to return to oestrus than a third-calver or so, for example?

For beef heifers after their first calving, the anoestrus period is usually 10-15 days longer than for mature cows.

This is because the heifer needs energy for growth as well as maintenance and milk production.

Begin breeding heifer replacements 2-3 weeks before the main herd so that they will be longer calved at the start of the breeding season following their first calving.

For more tips on getting suckler cows back in-calf, click here.