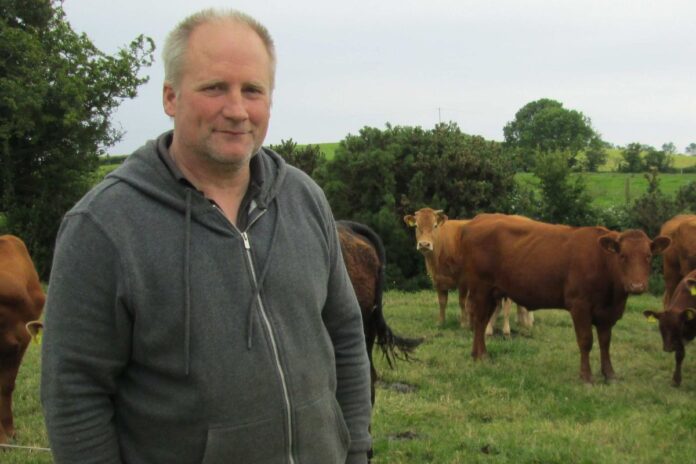 The use of ‘sexed semen’, semen sorted according to gender, has become more readily available and is being adopted with success within the Northern Ireland suckler herd, writes Colin McEvoy, College of Agriculture Food and Rural Enterprise (CAFRE) Beef and Sheep Adviser.

The benefits of accelerated genetic improvement within the breeding herd and the commercial availability of female-sexed semen from maternal beef sires are making this a viable option for many.

One such farmer who is embracing this new technology is John Cultra.

Sexed semen, in comparison to conventional semen, is more expensive but carries many advantages.

For John, there is one major advantage which makes using sexed female semen a good fit for his farm; the ability to target maternal and terminal genetics to certain breeding stock.

Whilst operating his closed herd policy in conjunction with sexed female semen, John now does not need to breed as many of his herd to a maternal bull as the probability of a heifer calf from sexed semen is greatly increased.

This, in turn, allows for more of the herd to be bred to terminal sires while still maintaining the required number of replacement females being born.

He can individually select cows for artificial insemination or natural service to terminal sires with superior growth and carcase traits, resulting in higher performing calves which, in turn, should increase the output from the herd.

In addition, the use of sexed semen and novel synchronisation programs has helped John to breed a compact batch of future replacement heifers.

These heifers will be calving down sooner at the start of the season than when compared to using conventional semen or the stock bull.

Sexed semen does come with its challenges, with one seen on-farm being the potential for lower conception rates compared to conventional semen.

To maximise conception rates, it is important to pay particular attention to straw handling and AI procedure at the time of breeding.

On the Cultra farm, the use of sexed semen was prioritised on maiden heifers as they are generally more fertile and should have higher conception rates when compared to cows.

Six heifer calves were born to this first service, resulting in a conception rate of 60%.

By opting to use sexed female semen, John noted that birth weights were lower, aiding calving ease on these heifers, which were calving for the first time at 24 months.

He has seen first-hand the benefits of using sexed female semen this year, commenting that any suckler farmer who uses AI could also see the benefits.

If planning to use this technology, there are a few things worth considering:

In conclusion, John plans to use sexed semen this year again, allowing him to continue producing female replacements from high genetic merit maternal bulls mated with the best maternal females in his herd.

With the variability in conception rates, he relies on an experienced, competent AI technician to carry out the AI procedure.

He is also careful in his animal selection, animal nutrition; pre and post-service and animal handling; during and after service.

Although the use of sexed semen has added extra expense to the system, it gives John greater control allowing him the opportunity to choose the calf sex, which can have a huge benefit within his breeding strategy.

‘I intend to stay in suckler farming’ – 30-cow farmer

- Advertisement -
Previous article
Veterinary: ‘You learn far more in your first six months in practice than you will in college’
Next article
Outlet hatch from a slurry tank lands farmer (50) in court