That's FarmingThat\'s Farming Irelands Largest Farming News, Properties and Classifieds Network
HomeBeef‘I lost my drive to go to work and my passion for... 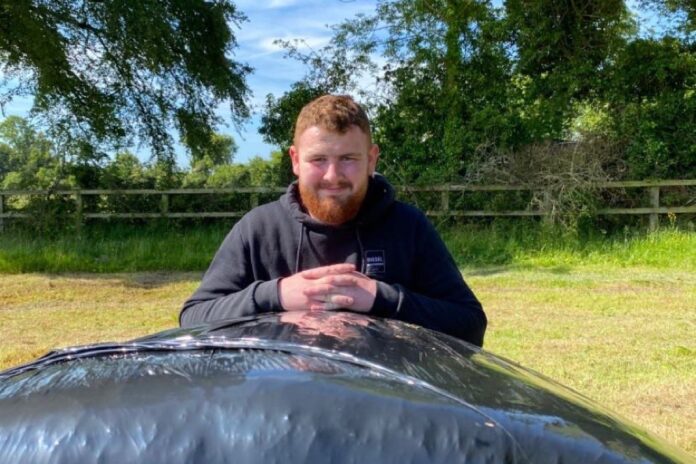 As part of this week’s Farmer Focus segment, That’s Farming, speaks to Dylan Farrell, a farmer from Dublin. He discusses his passion for farming, his mental health struggles and establishing a calf-rearing enterprise with his partner.

Dylan Farrell from Saggart, Dublin, did not let mental health struggles in 2020 prevent him from working towards achieving his goal of becoming a farmer in his own right.

The former FRS farm operative/relief milker said Pieta House helped him regain his “drive” and “enthusiasm” to progress in life and helped him work towards achieving his ultimate objective: to become a dairy farmer.

“I lost my drive to go to work and my passion for farming,” she told That’s Farming.

Now one step closer to that goal, he rears ten bull calves on 6-acres of rented land with his partner, Roisin Condell, who hails from an equine background.

At the age of twelve, he “fell in love with the farming lifestyle” on his mother’s cousin, Sheila Sheridan, and husband Anthony Sheridan’s beef and tillage enterprise in Nobber, County Meath.

During his second year at Holy Family Community School, Rathcoole, he was asked to assist on a 60-cow dairy farm for the summer period.

He left secondary school in September 2017, when he was in fifth year to relief milk for dairy farmers, and the following September, he enrolled at Gurteen Agricultural College.

In year one, he completed a Level 5 Certificate in Agriculture, during which he undertook placements with a dairy farmer and then a tillage farmer.

Then, in year two, he progressed to an Advanced Certificate in Dairy Herd Management – Level 6 and completed placement on a dairy farm.

He then secured a part-time job with Rob Colton, a sharemilker with Saturn Farms, Cork, on a leased farm.

“To be honest, when I was absent from school, I was dosing cattle or helping with TB testing – things teachers could not question. I feel the part-time job with Rob gave me hope I could have a farm of my own right in the future,” Dylan told That’s Farming.

“Yes, ten calves seem like a small number, but when you come from a housing estate in Saggart, Dublin, there is a great sense of achievement standing in the paddock with them.”

Currently, he works with Mossy Hannifan and Sons, a Kildare agricultural contractor and will return to working on a dairy farm following the summer.

In March 2021, Dylan and Roisin approached her family about buying calves and using one of the land parcels on the farm.

After securing their permission, they invested in three Montbéliarde-cross, one Charolais-cross and one Belgian Blue-cross calf, which they raise for the first winter before they sold them at Carnaross Mart at around 250kgs.

In mid-February 2022, they purchased six Friesian-crosses, one Hereford-cross, one Belgian Blue and two Hereford-cross calves from dairy farmers.

“We only source our calves from farms. So, I was confident in purchasing these calves, knowing the farmer, his attention to detail in rearing them, and as a bonus, I knew their dams and sires.”

The Progression in Dairying forum member and his other half rear calves on two bags of milk replacer each and calf starter pencils (more than 1kg/head/day before weaning).

They also provide them with adlib straw/water and supplement them with Sealac Seaweed Flake supplement, mixing it through milk and meal at grass.

“For example, last year’s calves got 1kg of meal until July. This year’s got a kg until June, and with better grass management, there is no major difference.”

“The reason we fed less meal was because of the rising cost of it. We also feed straw to them.”

They outlined that when calves leave the shed, they consume 1kg/head daily of a follow-up nut, and they isolated calves not performing to the required level to give them 2 kgs/head/day for several weeks.

They wean calves off meal, and when they cut silage, they graze the after grass, with a policy of weaning by weight and not age.

“The most important thing I learned through farm placements and experience is that calves must be double their body birth weight (+ 10 kgs) and look full and strong on the eye.”

“For instance, we made a profit last year. Cattle averaged €2.30/kg, which covered costs and helped. We put a set amount into a saving fund, our savings, but it helps with the calves – everything is 50/50.”

“We are happy with what profit we get and will never take less than the input costs. Roisin is very good with PC skills; she records everything and breaks down the cost per head so we know what each calf must achieve.”

“We go to the mart to sell for demand – online bidding is a great benefit. However, I can be too shy to have a farmer come here to buy; I am not very good at haggling for a price.”

They graze calves in a 6-acre paddock, split into four parcels, 1.5-acre paddocks, with an adequate water supply.

“To be honest, we stayed away from bagged fertiliser because we could not justify it. However, we will hopefully go with farmyard manure to replenish P and K levels.”

“Currently, we are not in the position to house cattle this year as we do not have facilities and will sell our cattle in the mart again.”

“However, if we gain more land, we will look at an out-wintering crop, kale, or fodder rape, to have calves for longer and open more options.”

“I think another thing that suits well with calves is low feed demand. So, we take high-quality silage off the field and sell it with a DMD higher than 70%.”

“To be honest, due to the drought, we had no problem selling the silage this year.”

Dylan’s aim for the future is to milk his own dairy herd on a leased farm (a spring-calving grass-based system), rent a farm to establish their calf-to-beef enterprise and, in 2023, possibly change the farm system to dairy yearlings and bull and sell them.

“There are high demands of Irish farmers with high prices of inputs, but it will eventually level out, it has to. So, sometimes I say you just have to improvise, adapt and overcome.”

“I am only 21, so I do not mind taking my time and learning with every step. I often stood in a paddock after morning milking hail, rain or sunshine, hearing cows graze grass.”

“Honestly, I feel proud to be a part of that process, but the urge to own my stock and hear that sound will not leave me until that goal happens.”

“In my view, farming is a very rewarding lifestyle that no other job comes close to offering.”
“I could not pick anything else to do bar milking; I love the calf system we do, which is part of my goal, but dairying is the end goal. I believe it is better to have two options than one,” he concluded.