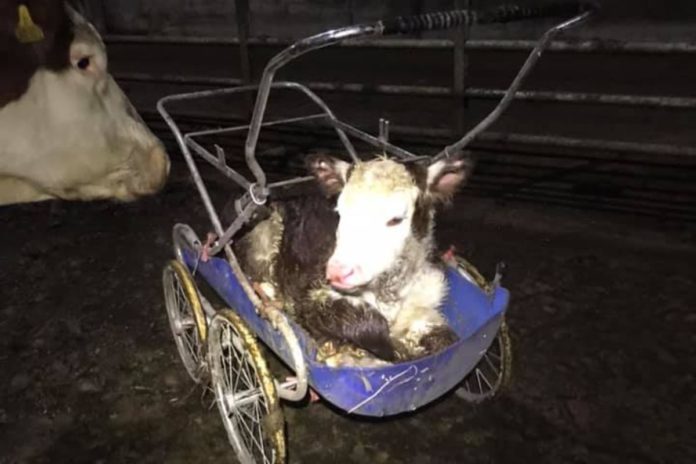 That’s Farming speaks to a beef farmer who has created his own DIY calf carrier.

They say: “necessity is the mother of invention” and that is particularly true in the case of an innovative beef farmer who has found a unique way to transport freshly born calves.

Gavin Dunbar, who is based in the UK, used an old pram, barrel/drum, and baler twine, to make his own calf carrier.

How to make this DIY calf carrier

The beef farmer was inspired by a similar DIY calf barrow that was showcased on television in recent times.

Speaking to That’s Farming, the beef farmer said: “Basically, I just used an old pram. Then, I cut a blue barrel, approximately 1/3 of it, and then took the semi-circle out the one end to allow the calf to slip in.”

“From there, I drilled the bottom and placed baler twine on the bottom to stop it slipping out. It is very handy.”

“I saw this on This Farming Life; the girls from Shetland had a very basic home-made barrow, so I just tried to make the same with some tweaks.”

“My aim was to get a barrow closer to the ground to make it easier to get the calf into it and to have a more stable base.”

“Our calves vary from 34kg to 55kg. 55kg, I would say, is probably as big as I would go. It [the DIY calf barrow] isn’t too bad to use, but you just need to be gentle getting the calf in and out. I have not tried any other barrows on the market.”

Meanwhile, a Tipperary dairy farmer has created a Calving Assist to aid farmers in assisting cows to calve.

Jim Ryan experienced issues with his back in his early 30s, which prompted him to design a device similar to a belt to assist with calving cases. Following the release of a video on YouTube, he sealed a deal with Farm Relief Services ahead of the busy calving season. The product will cost €100 (plus VAT).

“It [the Calving Assist] is not competing against a calving jack. It is just for smaller calves that need assistance. With this invention, you can calve cows easier.” he told That’s Farming during an interview, which you can read here.

Have you a home-made DIY farm invention? If so, please email – [email protected]