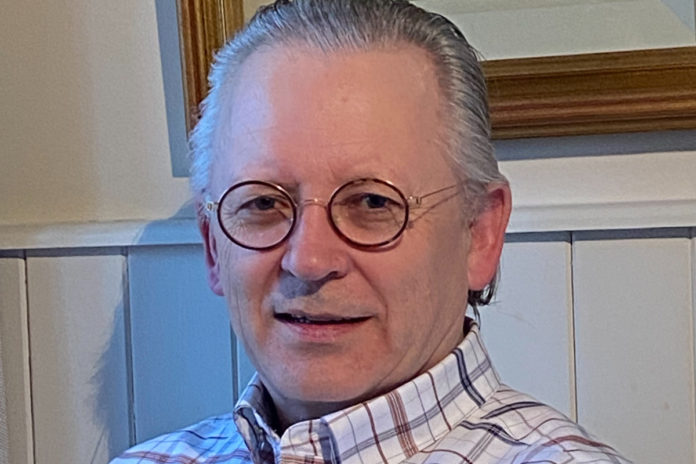 In this week’s Suckler Focus That’s Farming, speaks to Cork Shorthorn breeder, Richard Lee. He discusses moving from dairying to suckling, organic farming, calving heifers at 24-months, DNA testing, and how the breed will play a role in the future.

In 1983, they began dairy farming largely due to the introduction of milk quotas and, at this time, also established a small suckler enterprise.

They exited dairying in 2000 mainly due to the prospect of having to make a major investment in milking facilities, the quota system still being in place and for lifestyle reasons.

“Shorthorn cattle got introduced to the farm as a result of a gift of three pedigree heifers from my uncle Paddy. These were from the Ballingarrane herd owned by the Watson family and managed by George Fennell near Clonmel,” they told That’s Farming.

“The cow family names in the herd today consist of the original Winsonia Belle, Foggathorpe’s from Ballingarrane, the Emma’s from Pat McCarthy, the Tralee’s from Art O’Connor and home-bred Primrose family, which was graded pedigree through the grade-up scheme operated by the Irish Shorthorn Society.” 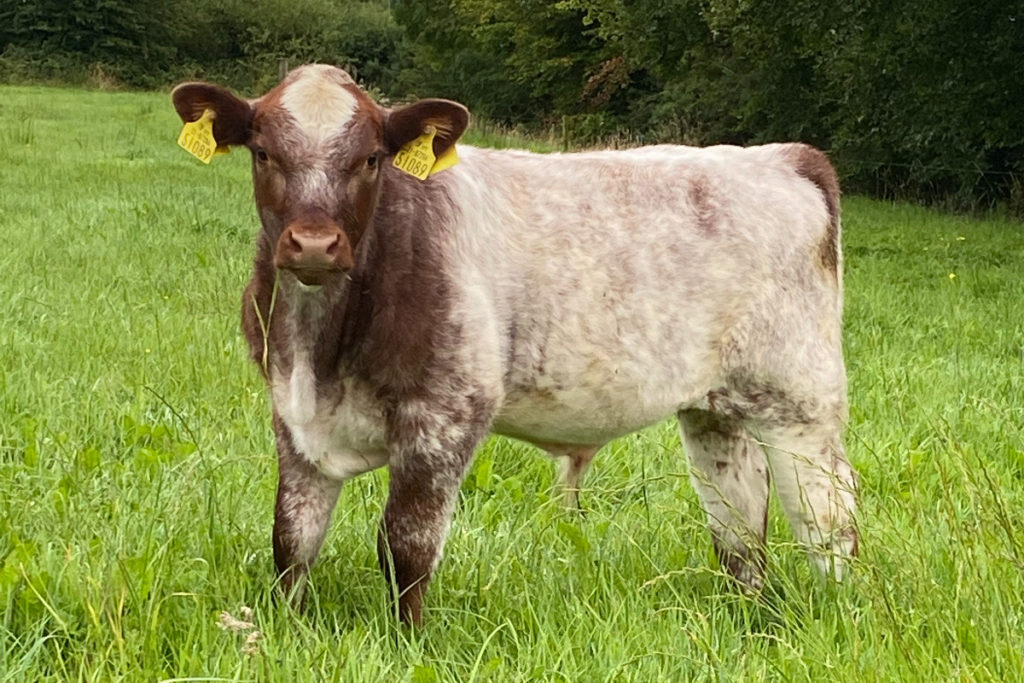 In 2016, they joined the Organic Farming Scheme and are fully certified for several years.

“We effectively were farming organically anyway and did not want to go the intensive route.”

“The Shorthorn herd were also ideally suited to the system. We have not had to make many changes. The buildings were adequate, and the calving was shifted to April/June.”

“The herd calves outdoors, and this helps in minimising calf diseases. As the breed usually calves easily, it is not a management problem.”

They operate on a veterinary health plan. All vaccination, dosing etc., is guided by veterinary advice based on herd history, and blood/faecal sampling etc.”

“All females are sold as pedigree heifers for breeding or retained. A small number of males are kept for sale as registered sires.”

“The rest are castrated, weaned and sold to an organic farm for finishing.”

“We welcome interested prospective breeders to visit the herd to see how we operate. Now, many of our customers are repeat buyers.”

“Obviously, as we have a herd of only thirty females, we have a limited number for sale each year.” 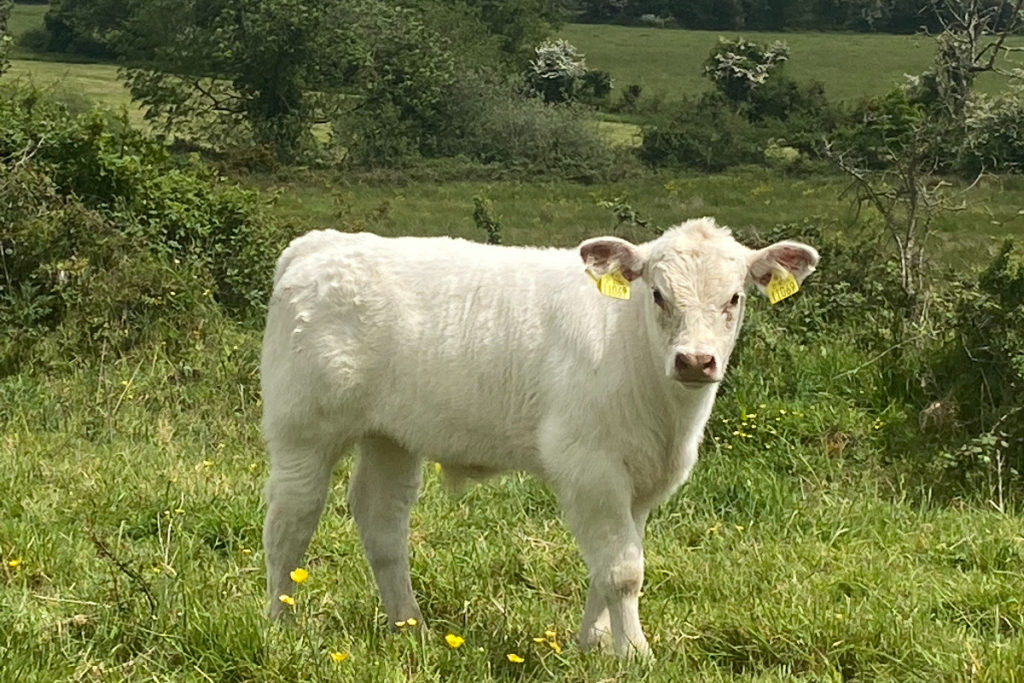 Through the years, they have made other stock bull purchasers from notable breeders: Maura/Donie McKeon, John Brosnan, Carmel/PJ Kelly, Annemarie/John O’Malley, Frances/Tom Forster, and the Brady brothers.

They also use home-bred sires from time to time.

“Having received the foundation animals as a gift, the breed chose us rather than the other way round. We describe ourselves as having a commercial pedigree herd.”

“The genetic pool in the breed can be tight enough. As we only use 100% pure genetics, this further limits the choice.”

“We have had success using genetics from the USA, Australia and Canada, in particular, those carrying Eionmor, Alta Cedar, Sprys, Ingleton, and Waukaru prefixes.”

“Recently, the Irish Shorthorn Society has been proactive in sourcing overseas AI bulls from Canada, and this is a most welcome development. We also use some traditional Irish AI bulls and will continue to do so.” 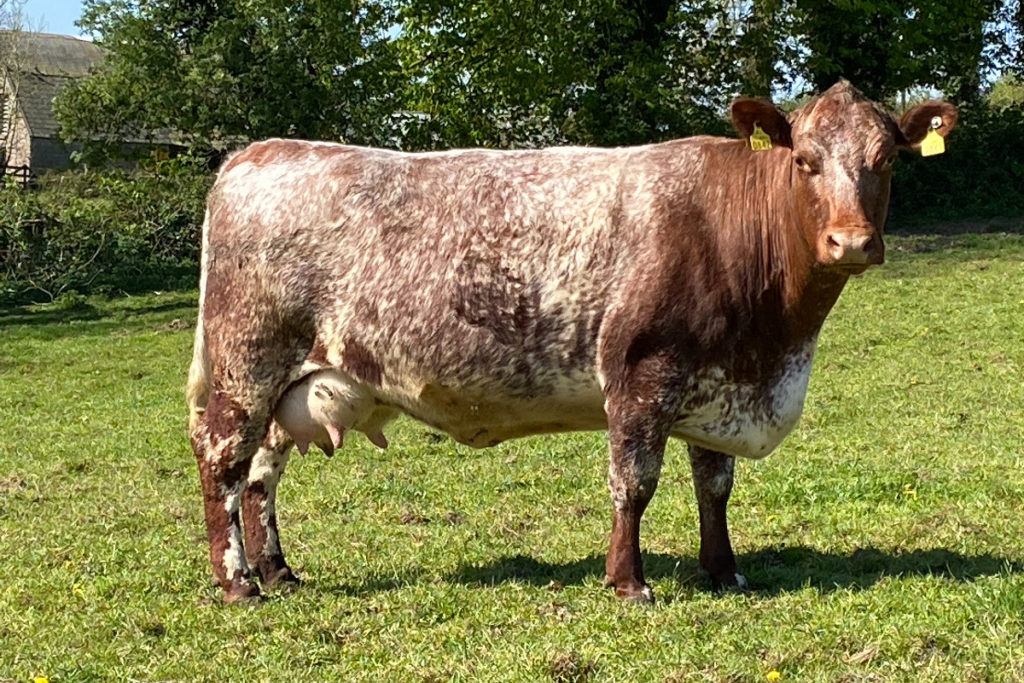 Calving takes place outside from April to the beginning of June. They calve their heifers at two-year-old to an easy calving bull.

“Leaving them to calve at an older age, we find, can lead to trouble as the breed has a tendency to put on fat at an early age. In Shorthorns, fertility and fat do not mix.”

The herd’s calving interval is 365 days or less, the breeder explained. They expect cows to wean as close to 50% of their weight as possible with no supplementary feeding of cow or calf at grass.

“Calves weigh 30-45kgs at birth, and assistance at calving is exceptionally rare. Shorthorns make great mothers and are usually very docile and easy to handle.”

“The breed has a combination of colour markings from white right through to red. I must say any herd of Shorthorns looks well in the Irish landscape.” 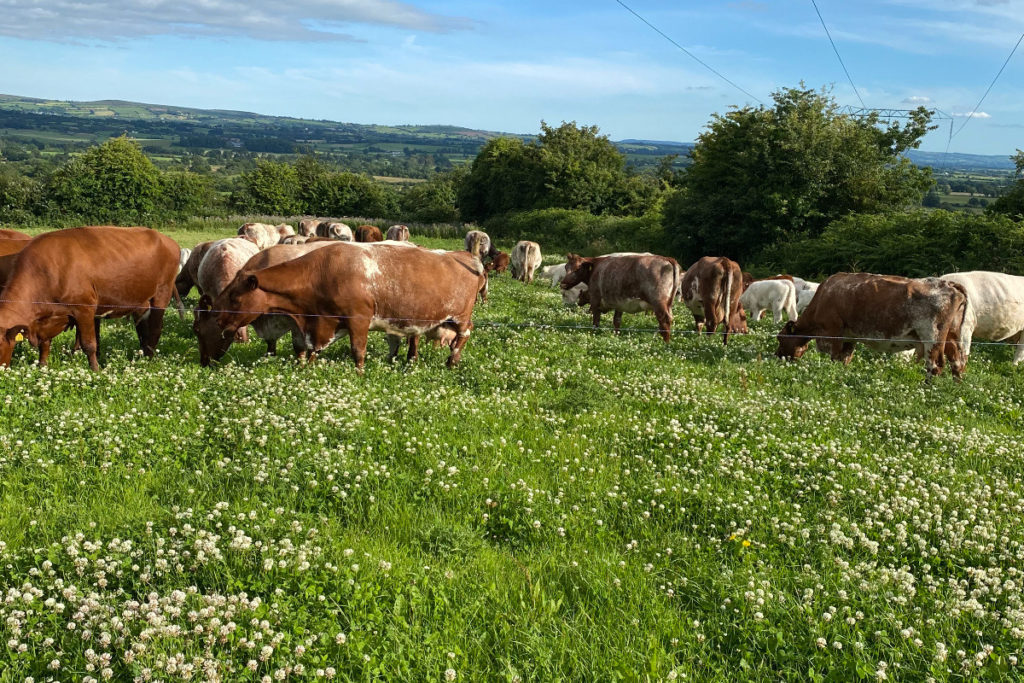 “You really cannot predict the colour of any calf until they actually hit the ground. They have the oldest herdbook, Coates’s, documented in this country in the early 1800s.”

“We try to concentrate on functional maternal traits. Furthermore, we try to use polled bulls with short gestations where possible.”

“All calves are DNA tested at birth. Apart from verifying parentage, it also allows us to identify traits for muscling, polled inheritance and hopefully many more into the future.”

“This information is also provided freely to prospective purchasers of stock on which they can inform their decisions. For example, some people want more muscle; some want less etc.” 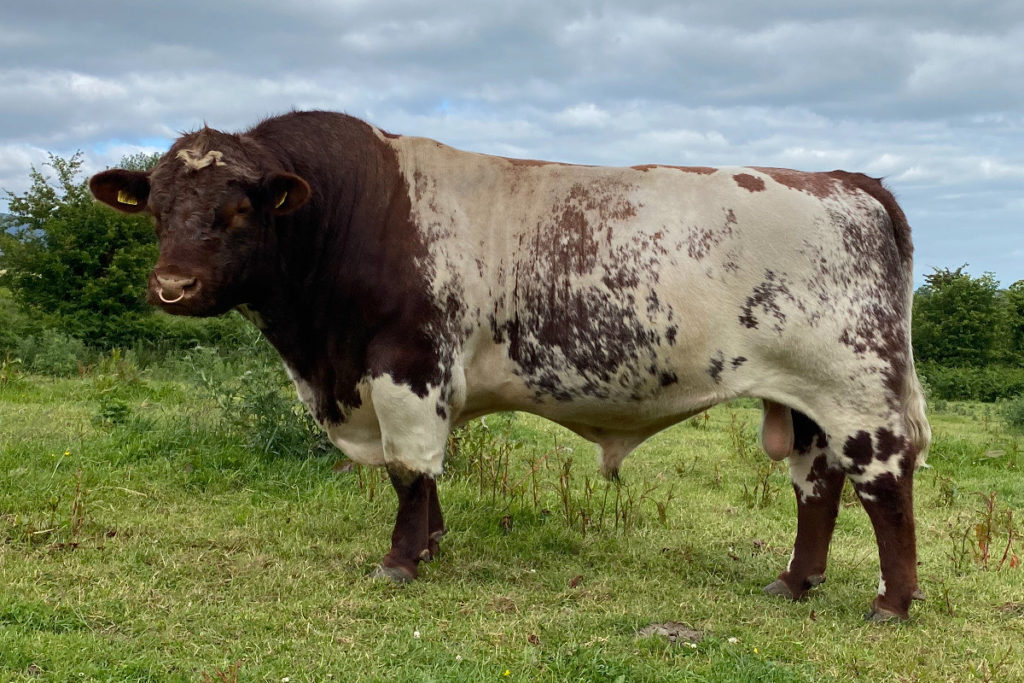 They plan to improve the herd’s efficiency, maintain current cattle numbers, further tighten herd calving, increase weaning weights from forage only, further use DNA data as more information becomes available and promote the Shorthorn breed as having a place in the commercial suckler farm of the future.

“I think the Shorthorn, along with other early maturing breeds, have a great future in the Irish suckler herd.”

“The best have all the functional traits to make them relevant, docility, fertility, early maturing, carcass marbling etc.”

“The moderate-sized cow that produces a calf in a trouble-free manner year after year will be the cow of the future.”

“It might not be for everyone, but some suckler farmers might consider the organic option and hopefully sell at a premium.”

“The modern Shorthorn is not a museum piece; give them a look, and once you have them, they will be keepers.”

His advice to aspiring pedigree Shorthorn breeders is to visit as many herds as possible making a purchase.

“You will be able to see the herd, dams, sires, even grand and great-grandparents of the animals for sale.”

“Buy the type that suits your situation and try to be patient. Keep your own replacements and use the best stock bulls and AI sires available.”

“Study the pedigrees of the cattle you like. Avoid breeders who trash other breeders. Try to avoid paying big money for what the Americans call ‘white muscle’, i.e. fat; it is a fertility disaster,” the Cork Shorthorn breeder concluded.

- Advertisement -
Previous articleBullocks to €2,070 with ‘good attendance’ of ringside and online buyers at Roscommon
Next articleIrish farmers to be represented at demonstration in Brussels