That's FarmingThat\'s Farming Irelands Largest Farming News, Properties and Classifieds Network
HomeBeef‘There does not seem to be many young people coming into ag... 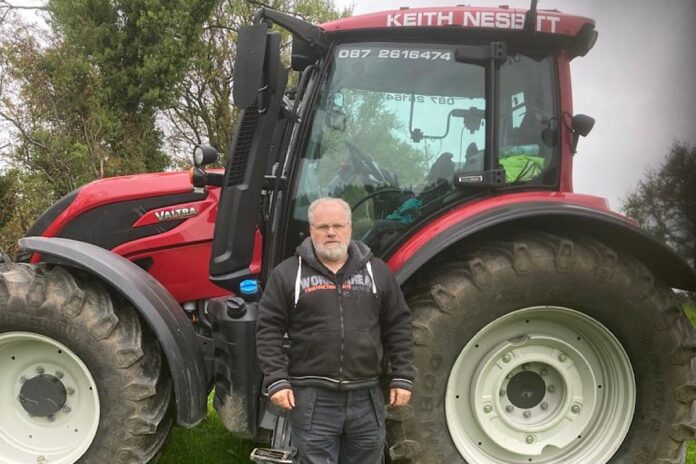 Taking three cuts of silage off his 28-acre farm (owned land), selling these bales to farmers and operating an agricultural contracting business keeps Keith Nesbitt from Rockcorry, County Monaghan, on his feet.

In the early 1980s, he left secondary school after Junior Cert at Beech Hill College to pursue a career in agricultural contracting.

He established his business mowing hay for a neighbour using his father’s PZ 165 rotary mower and a Massey Ferguson 148 tractor, progressing to tedding with a PZ tedder, rowing using a PZ rake and baling with a Jones square baler.

Following this, he invested in a new PZ tedder and PZ rower in one year and upgraded his baler to a brand-new Jones MK12-t the following year.

According to Keith, the business made around 3,500 square bales of hay in year one, exiting the service in 1984, with equates to up to 35,000 bales passing through the chamber.

In 1985, he moved into offering a pit silage service using the family’s single-chop harvester.

“In 2003, I quit the pit silage service I was offering because help was too hard to get and expensive, so I moved into round bales. At that time, I employed five people along with myself,” Keith Nesbitt told That’s Farming.

“I was involved in round baling before 2003, but I moved into the round baling more so at that stage,” added Keith, who grew up on a dairy and beef farm.

Over the last four years, the Rockcorry, Monaghan business condensed its list of services, employing one part-time operator at peak times. Keith built up his customer base through word of mouth, making customer satisfaction his “priority”.

“For example, to give you an insight into my work, I have a track machine sawing/mulching during the hedge-cutting period of the year, from September to the end of February, spread slurry and reseed in spring, and then I have a round baling service.”

“To be honest, this year, there was little reseeding with a right amount last year. So, I suppose it depends on the year, grass, and weather conditions.”

“In my eyes, I do not think there was money for that work with the way prices have gone. In my opinion, farmers are only willing to spend money on essentials.”

He outlined that over the last few years, farmers have included more clover in their reseeding plan when enlisting his agricultural services.

Keith empties up to 30 slurry tanks annually and makes up to 10,000 round bales, 95% of which are silage, with the remainder being hay and haylage.

His latest service is sawing with a digger, involving a saw head attachment, which he introduced at the beginning of REPS, resulting in up to five years of winter work.

“In my experience with this work type, I feel the most significant thing is to be on time, be there when you say you will be there, and give good service. So, I try to do a job as good as possible, do my best, and keep everyone happy.”

Clarke Machinery Limited looks after the Valtra’s maintenance as it is under warranty, while the same applies for other machines under guarantee, and maintaining additional equipment in-house.

“For example, I try to change one tractor every three to four years. I like to keep tractors fresh, and hopefully, there are no major problems, most times, they are under warranty.”

Other items include a JCB JS130 tracked excavator, a Redrock 14T dump trailer, a Kverneland 10ft trailed mower (which he changes every three years), a Kverneland rake, a Lely Lotus tedder, and the McHale Fusion 3 Plus integrated baler wrapper,

According to Keith, weather conditions present the “biggest” challenges that he faces in the industry, with other difficulties being the slurry spreading ban, bale wrap costs, and machinery and part prices.

“So, I think slurry spreading dates could be taken back and leave it up to the farmer when it is more suitable. A lot of the years, ground is better in January than February.”

“To be honest, farmers will not waste slurry with the way fertiliser prices have gone in the last two years.”

“Take, for example, a one-and-a-half-year-old tractor; I got a 1,200-hour service done on three months ago.”

“The last tractor service before that with also 1,200 tractor hours was almost over €1,000 dearer with the way parts, labour, and engine oil have gone.”

The future of Irish agricultural contracting

According to Keith, with increasing machinery prices and input costs rising, “there will not be many changes” made to the firm’s current operations.

“In my opinion, the agricultural contractor is a very important business to the farmer. Yes, you make a living at it, but you get VAT charged on all work.”

“If I am honest, I do not know what will happen in the next ten to twelve years because I cannot see many people coming into farming,” the agricultural contractor concluded.

- Advertisement -
Previous article
Castlerea: Tops of €2,240 for cull cows as weather bumps up numbers
Next article
Ag science at NUIG ‘taught in the west with a global focus’