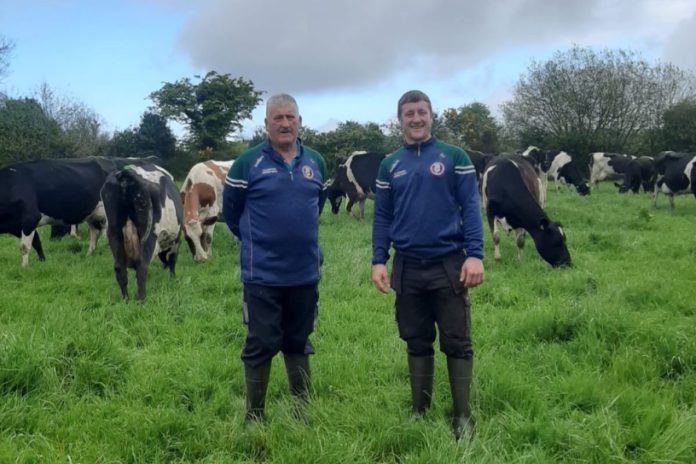 Jones family farming the land for over 270 years

In this week’s Farmer Focus, That’s Farming, profiles the Jones family of Clonroe Herefords, who also run a 90-cow dairy enterprise in Wexford.

Clonroe Herefords traces its roots back to 1920 when the Jones family acquired their foundation female, Peggy.

The Pallas, Gorey, County Wexford natives have been “hooked on the breed ever since” and now farm a 12-pedigree cow herd alongside a dairy enterprise.

Aidan farms with his father, John, with the help of his mother Norah, brother Denis, wife Orlagh, uncle Pat and his sons. 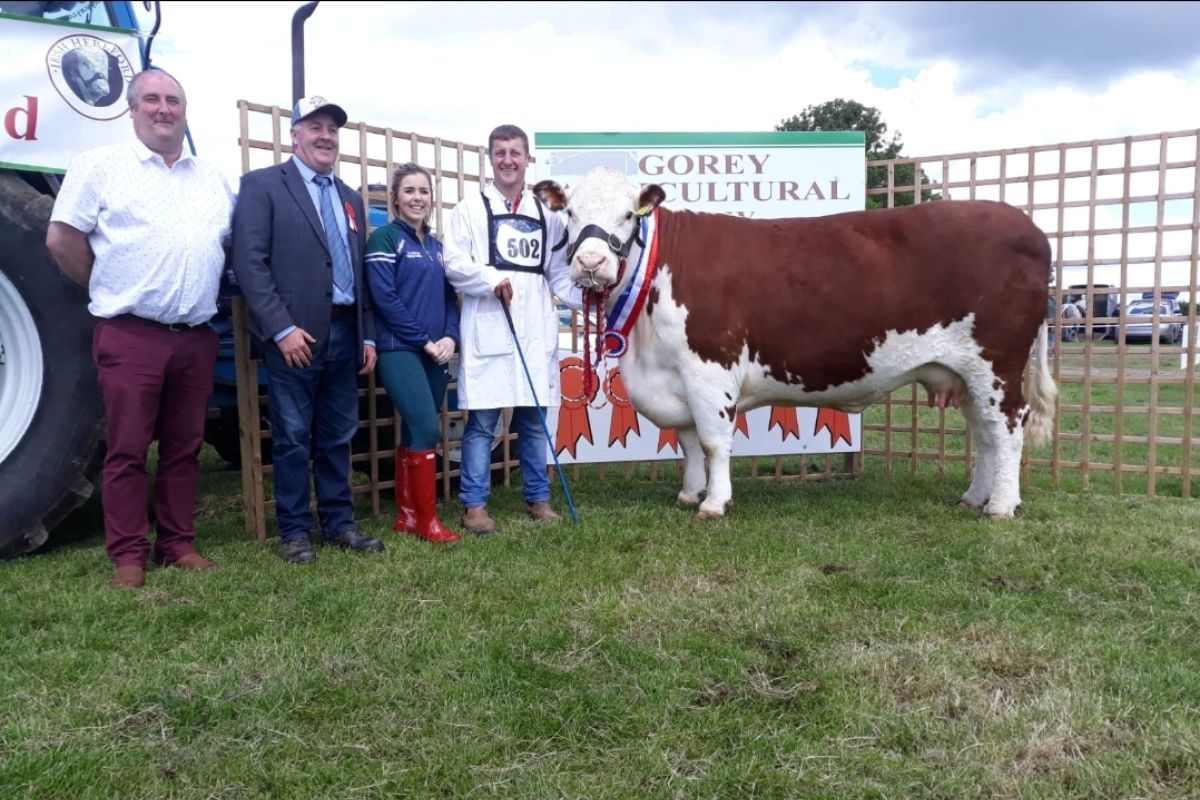 Aidan Jones told That’s Farming: “We love the Hereford breed due to their hardiness, docility and ability to put on flesh in a grazing system.”

“The herd travels to most summer shows around the country; we have had good and bad days. To note, we use both AI and stock bulls on the farm for breeding, with most of the straws coming from Progressive Genetics.”

“However, we purchased some Pute Nascar straws from the Hereford Society through Dovea Genetics last year. Calving traditionally took place in autumn, but spring-calving has taken over as the main calving period in recent years.”

“This is due to dairy farmers being the main buyers of our pedigree bulls, where stronger bulls approaching 24 months are required for large dairy herds.”

Luckily, they have sold the majority of their bulls to repeat customers over recent years. On the other hand, they keep some heifers as replacements but offer others for sale as surplus breeding stock to maintain their current herd size. 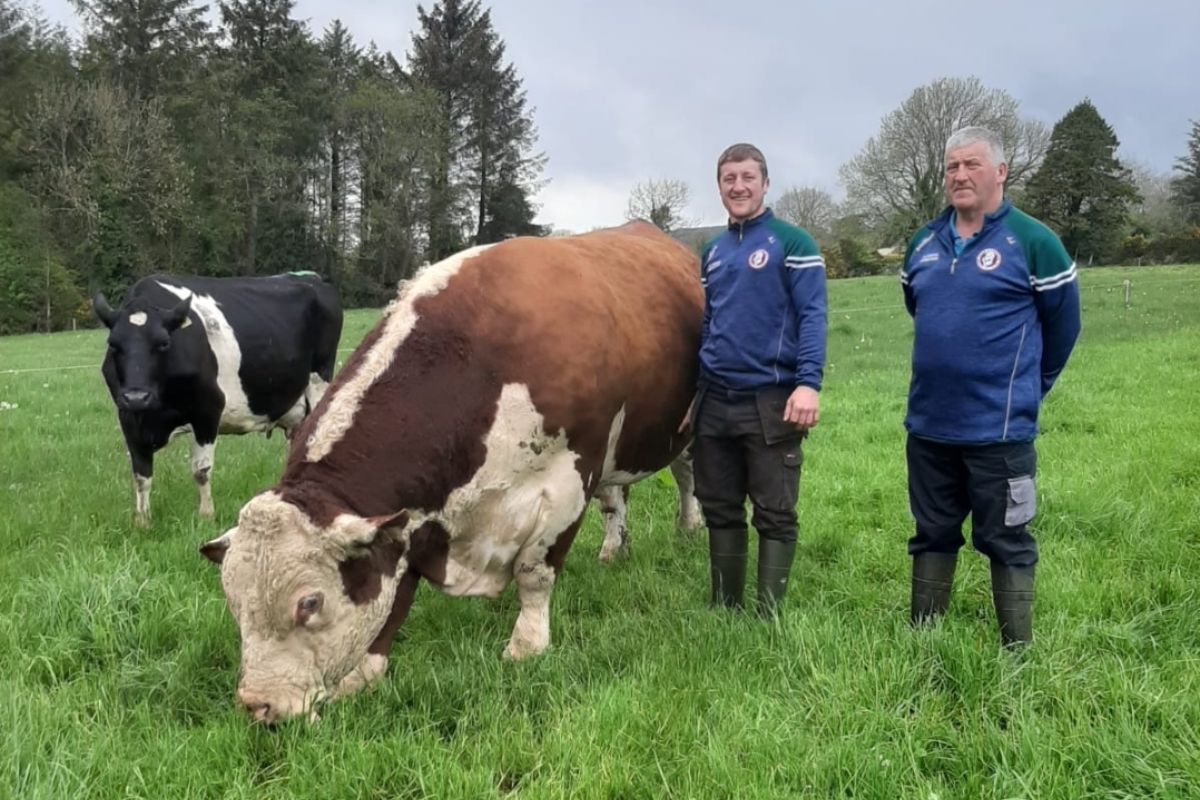 “Our typical cow type is 580-650kgs with length of carcass, depth of body and good feet that produces one calf per year while being self-sufficient, producing enough milk without introducing concentrates.”

“The Hereford cows and calves are housed for the winter on cubicles with a straw lie back for our calves. We turned them out in mid-February this year on silage ground before closing the paddock on March 20th.”

“Resultingly, we transferred them to a summer grazing platform where they will remain hopefully until late November early December, depending on ground conditions.” 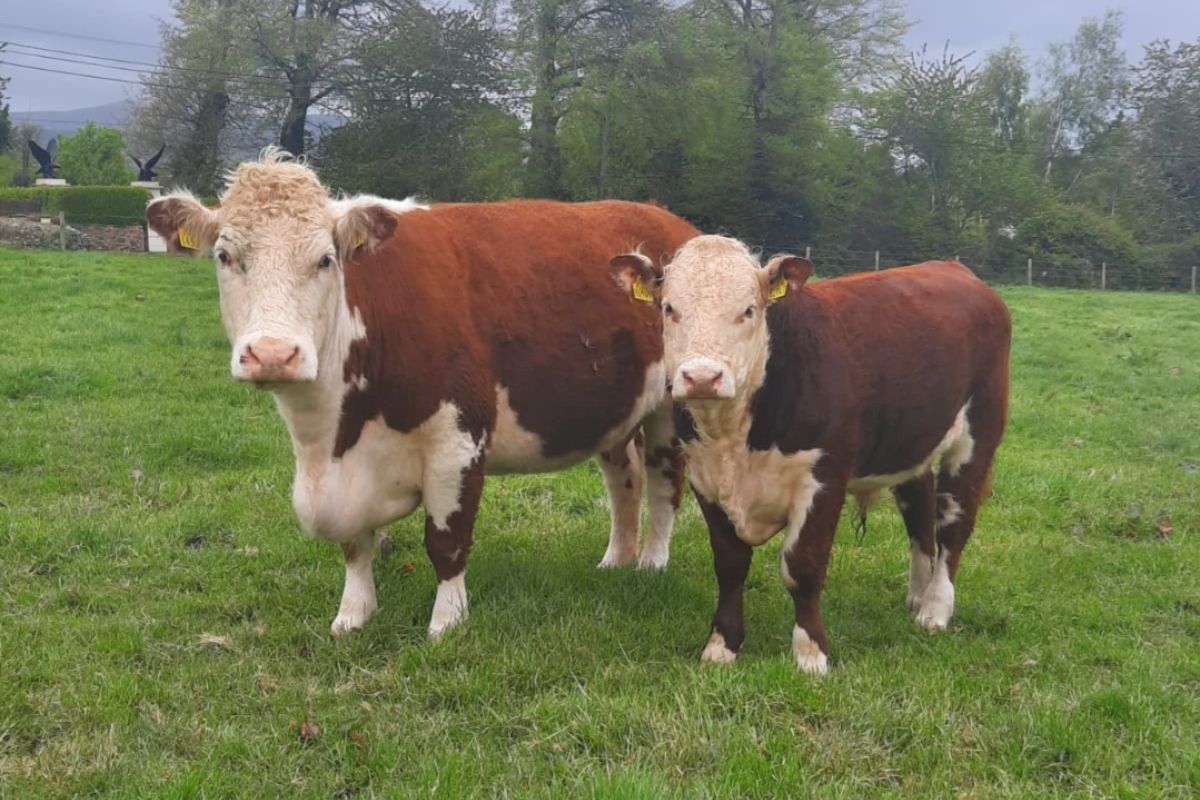 In 2014, the family milked 70 cows and has increased their herd to 90 head, resulting in a stocking rate of 4.5 per hectare.

The Jones strive to breed cows with 75% Holstein and 25% Friesian blood focusing on production and size. In 2019, they sold their winter contract and became 100% spring calving.

According to Aidan, the switch has been worthwhile, resulting in a dry period, a more compacted calving period and less input to produce milk during winter months.

The family have executed a strict breeding programme since they made the switch. Their top-producing cows on milk value will be AI’d over three weeks, with a Hereford bull serving the remainder to “breed our replacements from our most valuable cows”.

“We use Herd App from Agri Net on the farm while selecting which females to breed from their milk recording details and other reports on the app. During a busy three week breeding period, we find the app exceptional for documenting serves and sire advice etc.”

“After the three weeks, we alternate two Hereford bulls to make sure they remain active and have a better chance getting cows in-calf.”

Aidan, a DIY AI technician, has focused on fertility, protein %, fat % and kgs of milk when selecting sires over the last ten years.

They retain all females are replacements, calving these as part of a 24-26-month-old system. All heifers receive one straw of sex semen before being introduced to the pastures with an Angus bull.

“We have had good success over the past six years with 120 sexed straws calving down. We will continue to use sexed semen as we find it successful on heifers.”

“In 2020, 13 heifers were served with sexed semen with ten holding after one serve. Between cows and heifers, 42 were in-calf to Friesian after one serve, calving down with 32 heifers and 10 bulls. They all calved within a 3-week period, which left all heifers roughly at the same size.”

“We sell all bull calves, including Hereford-crosses, to returning customers who buy direct from the yard. The 21-day submission rate in 2020 on all breeding females was 56%, which is 78% for 2021, so hopefully a more compact calving block.” 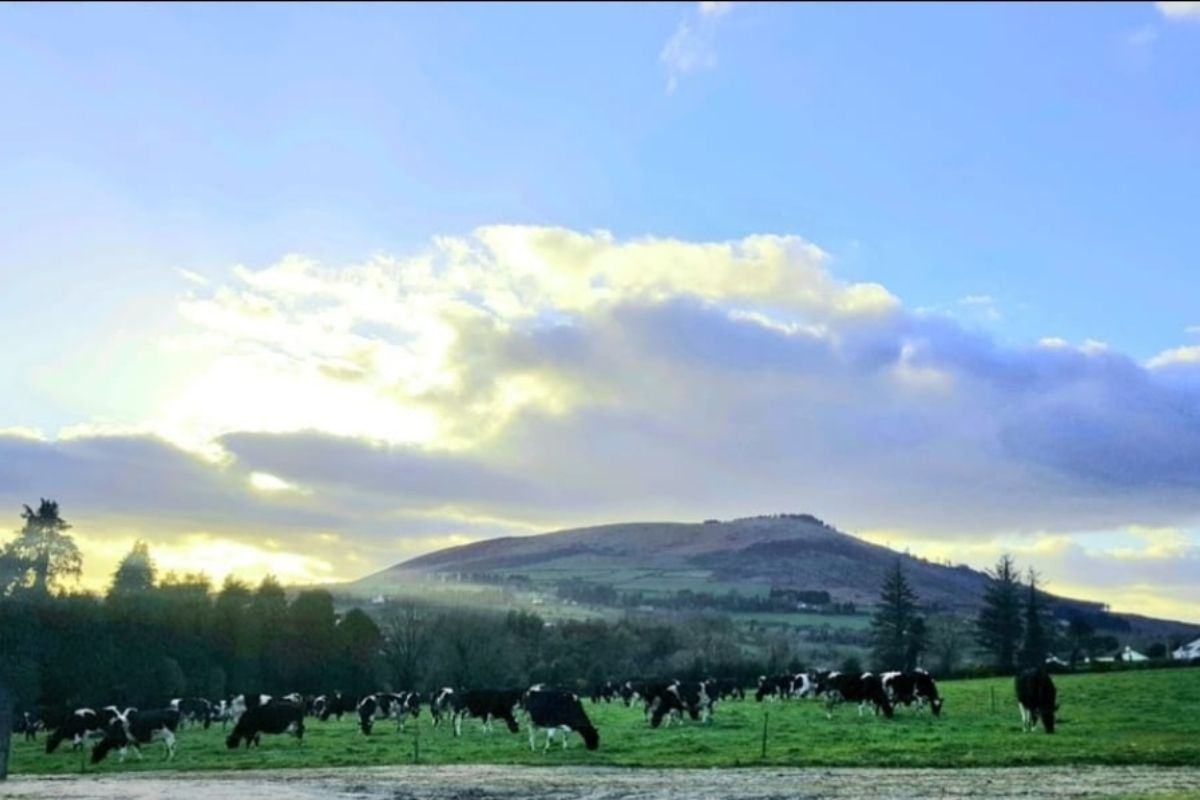 “Each cow receives 1 tonne of concentrate, which is high. However, because of our high stocking rate, it is necessary to maintain this number of cows with a large portion of this concentrate fed in spring and autumn to extend grazing.”

“We use paddock and strip grazing to allow us to clean out covers and not have cows eating regrowth, which is vital to us to maintain grass cover with a high stocking rate.”

“All females have cubicle facilities for winter housing which is a great advantage when heifers calve down and do not need to be cubicle trained.”

The family farm a fragmented enterprise across 60ha, encompassing a 20ha dairy platform, which leaves them “under pressure” during early spring grazing and late autumn for dairy cows.

They utilise the remainder in various locations for silage and grazing ground for dairy replacements, Hereford cows, calves and Hereford replacements. 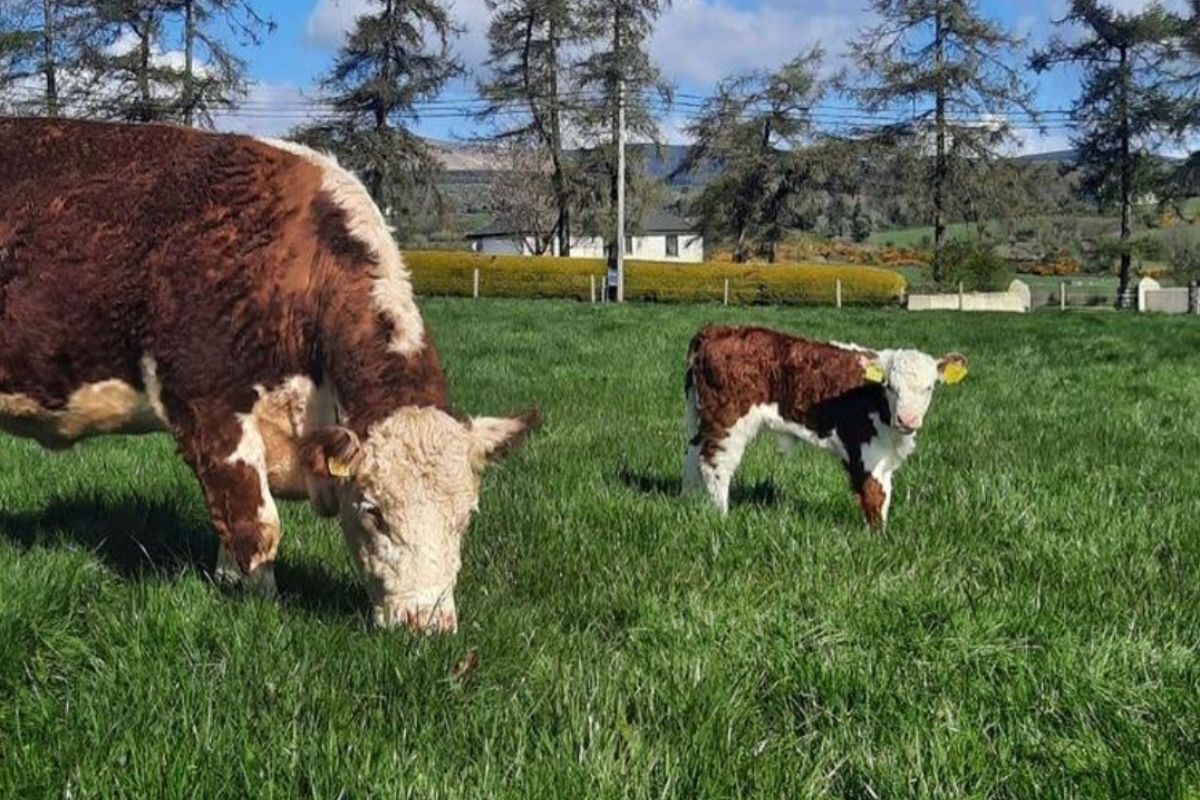 “The thing I most enjoy about dairy farming is selecting the bulls I would like replacements out of and watching that calf grow, enter the milking parlour and become a very productive animal.”

“I split my time between working 30 hours per week on a local dairy farm and the rest on the home farm along with my father.”

“We find it works well as we are set up that milking is a one-person job. I return during the day to complete any jobs that may require two people.”

“The family I work for are very accommodating – especially during the breeding season – where I return home to AI my cows after morning milkings,” Aidan added.

“I have been fortunate that my father did not stop me breeding the animal I wanted to produce, which could be a problem on many farms, but now we see the benefits in the production of such animals.”

Their hope for the future is to “keep improving the quality of our cows and the stock we produce”.

- Advertisement -
Previous articleVIDEO: €165,000 2-bed cottage on 22-acres ‘perfect for DIY enthusiast’
Next article‘Sligo needs a mart, and the people of Ballymote need a mart’