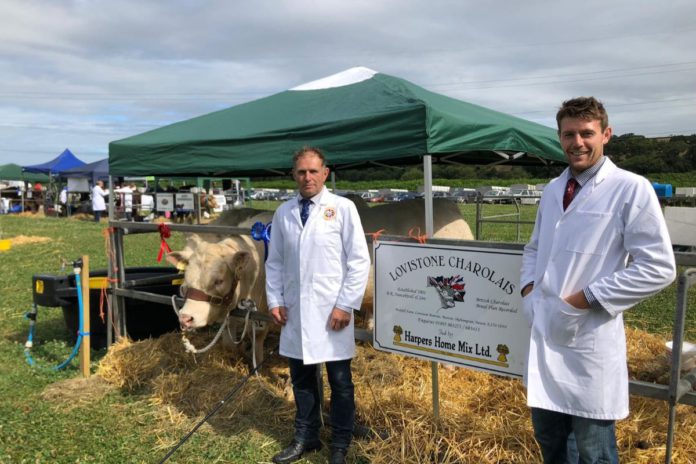 The Devon native runs a suckler, arable and beef enterprise across 980-acres, with his grandfather Brian, father Robert, one full-time employee and one part-time employee.

They are currently expanding their herd’s commercial’s arm as they have recently acquired some marginal grassland, which they “feel suckler cows will utilise best”.

Their herd comprises 30 pedigree Charolais breeding females, which they farm under the Lovistone prefix, and 40 commercial cows, mainly Salers-crosses and British Blue-cross-Holsteins.

They restocked following a foot and mouth outbreak in 2001, purchasing five cows with calves and five heifers from the Clayknight herd.

The bulls will look after themselves

In the early years, they retained all home-bred females and purchased cows from dispersal sales to improve genetics.

“We originally chose the Charolais for its unbeatable growth rate and finishing as well as adding value to the females,” the full-time farmer told That’s Farming.

George AI’s all heifers to high index and easy calving Charolais sires, while they have a stock bull, Cove Park Ranger. “A Saler bull serves all commercial heifers, while we run a home-bred Charolais bull with cows.”

“I take particular interest in the sire’s dam and grandam. I like to go by the motto: ‘If you breed the right females, the bulls will look after themselves’.” added the British Charolais Society member.

Pedigree cows calve from November through until May, providing the family with bulls of various ages to supply the bull breeding market. On the other hand, commercials calve from February through to April.

“We like our females to look feminine with plenty of good breed characteristics with a good bag of milk.” 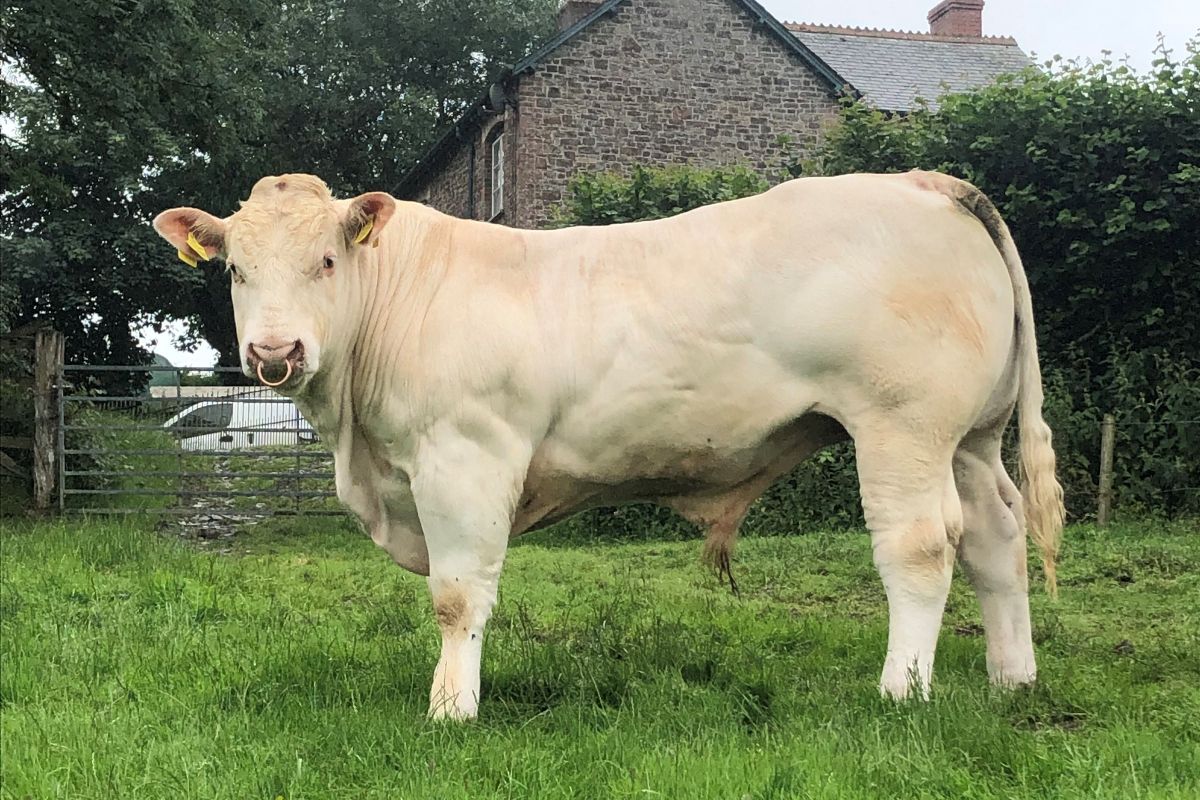 As mentioned, they sell their male calves as breeding bulls and retain their best heifer calves. They aim to finish any reject heifer calves between 18-20 months. On the other hand, they keep all commercial calves on-farm, bringing these through to slaughter.

“We are trying to move the commercials to predominately pure Salers cows,” added the fourth-generation farmer, whose great-great-uncle came to the farm in 1935.

“A Salers-cross-Charolais performs well at grass before they are housed for winter/finishing. Cattle can be pushed hard in the final months and respond well to feeding due to the growth of the Charolais.”

“The Charolais not only grows but fleshes well too. We can hit deadweights of 400kg plus with Charolais-cross-Salers and the right fat class consistently. There will always be a market for that type of calf.”

“After a visit to one of our customer’s farm, I was very impressed with what they were achieving with the Salers breed.”

“Salers had supreme calving ease, good milk and strong maternal qualities, which drew me to them. We bought a Salers bull and have been very pleased with the vigour and quality of the calves born.”

“If we can eventually grow a herd of good Salers cows, I believe we will have more live calves on the ground than just going with dairy-cross beef heifers, as we have done in the past.” 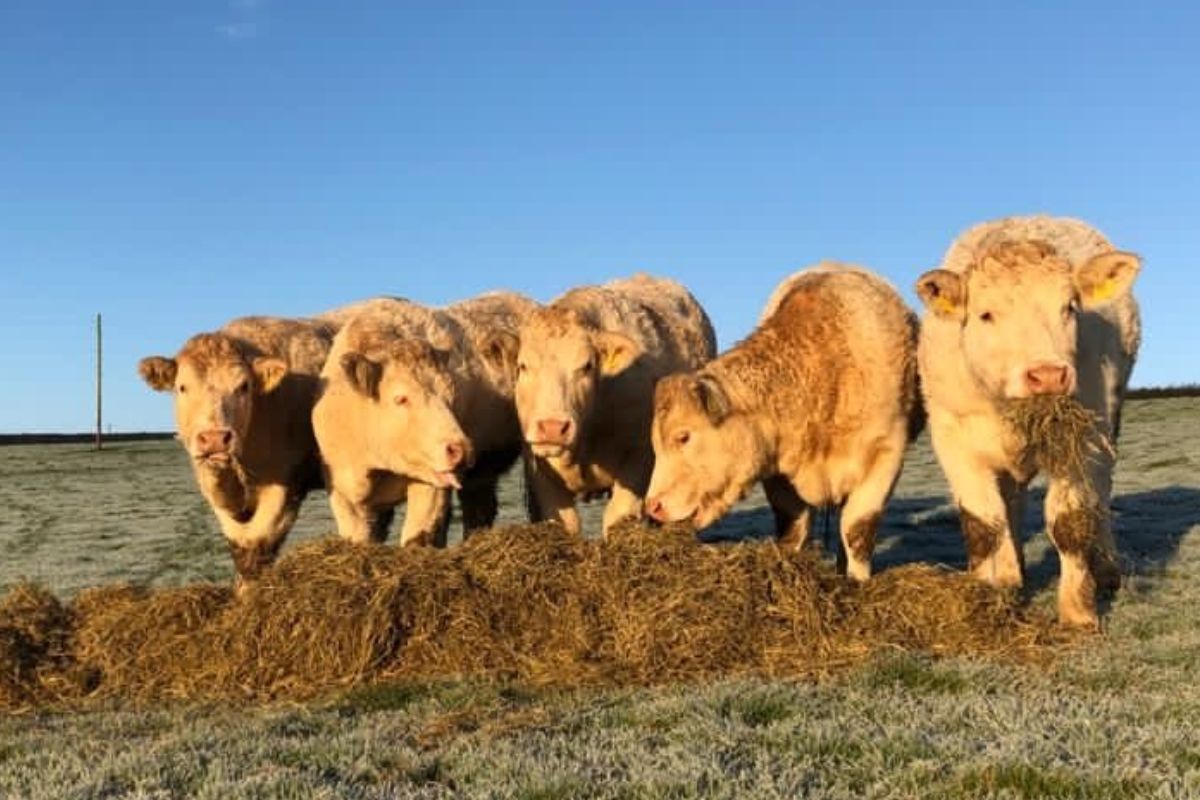 For George, setting, achieving and even exceeding performance target weights is paramount.

He has set target weights for commercial progeny at 400-420kgs (carcass weight), mainly grading Rs and Us, with occasional Es.

“We aim to finish progeny at 18-24 months. We feed cattle on ad-lib maize and sprinkle rolled beans on top of maize twice a day to balance the ration.”

Another critical target is age of first-calving, with commercials calved between 23-24-months and pedigrees at 30-months.

“We pelvic measure commercial heifers and cull any with an average or below-average measurement. As a result, we retain pedigree heifers with the right genetics and desirable traits. But, we cull any that do not fit this specification.”

“We do not like to ‘carry’ any animals if we can, especially commercials. So we bull heifers that are of good size and weight at 12-14 months.”

“To note, we do not select anything that is not up to spec. We do not find this age of calving impacts mature weight. Perhaps, in the early years of the cows’ lives, they are not so big but eventually, they catch up.”

“Our target is one calf, per cow, per year, and we aim to be weaning calves at 420kg come autumn.” 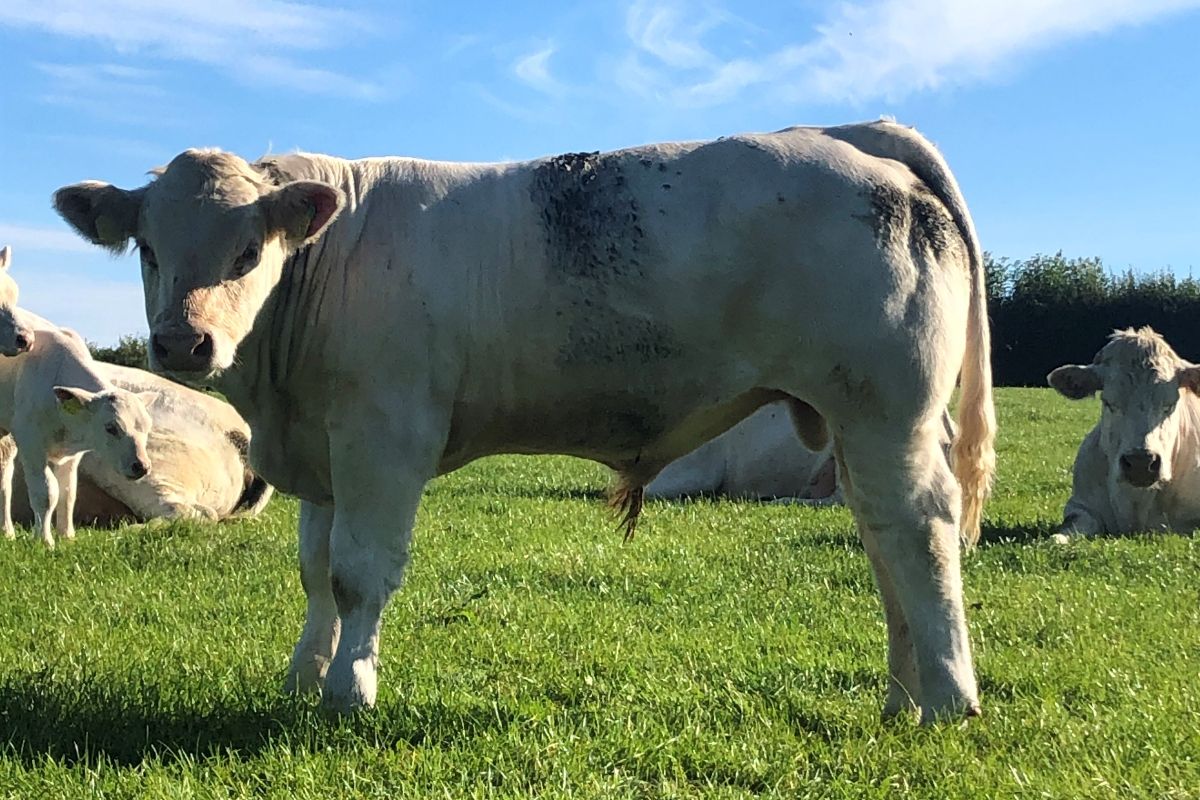 When asked what the key elements of successful suckler farming are, he said: “A successful calving, which ultimately gives you a good start meaning focus on calving ease is very important and breeding consistently good working females.”

His strict breeding and culling policies and eye for detail have landed the 25-year-old breeder several awards.

“My highlight has been breeding a herd that has the capability of selling high-quality bulls from each cow as well as now selling bulls consistently to repeat customers.”

“It would be nice to start to sell bulls further afield and build an even stronger name for ourselves within the Charolais breed.”

“I would like to expand the suckler herd. With current prices, the future looks promising.”
However, he feels these prices must remain as they are to make suckler cow farming more efficient to compete with beef-cross calves coming from the dairy sector. 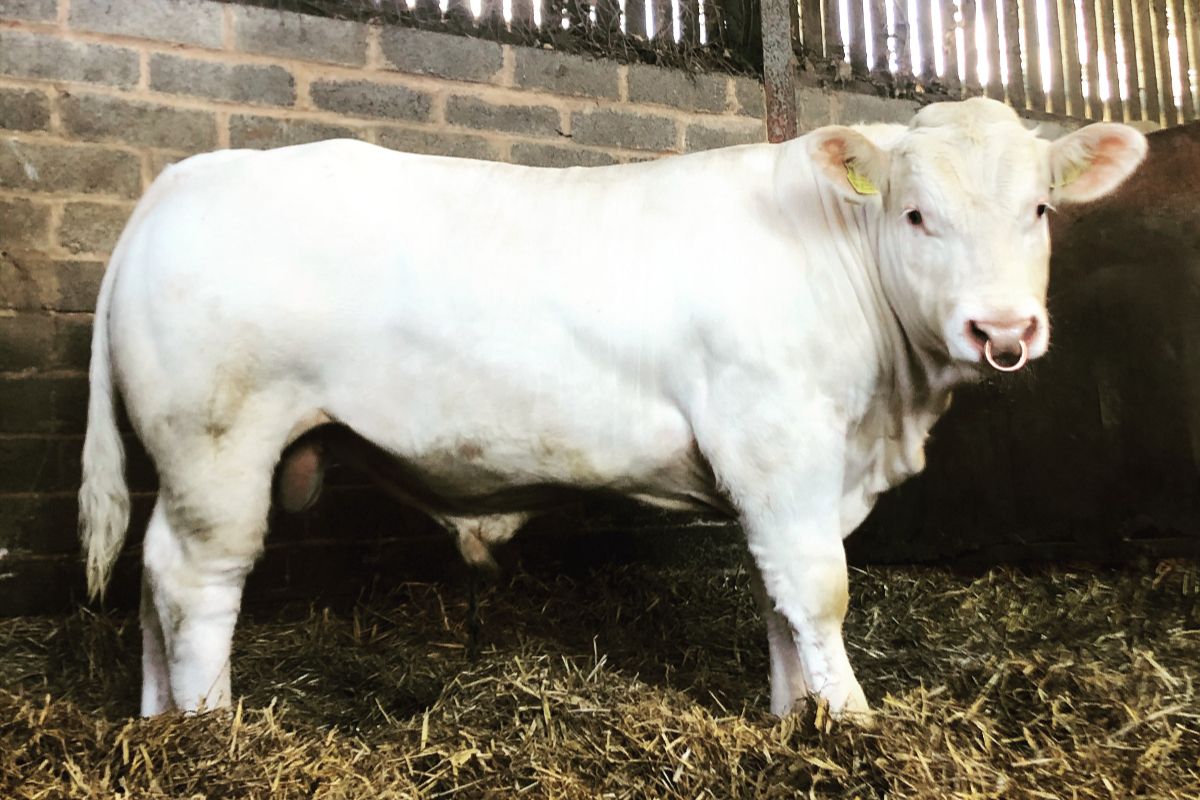 “A quality calf will always sell well. However, in recent years, we feel there has not been enough premiums on suckler-bred calves when considering the cost of keeping a cow.”

“We are happy with the way things are currently being run now. We would just like to increase the herd size and keep trying to improve on what we can do to make the herd more efficient and sustainable as possible,”

“I am only 25, so I feel there is still a lot more to learn and experience! Every day creates its own challenges.”

“However, I have learnt that with farming comes change. You must be willing to adapt yourself and your system to meet livestock and consumer needs,” he concluded.

- Advertisement -
Previous article
Motorcyclist in ‘serious condition’ in hospital following collision with tractor
Next article
Farmer’s Diary: I strive to keep my farming system as close to organic as I can afford