That's FarmingThat\'s Farming Irelands Largest Farming News, Properties and Classifieds Network
HomeBeef‘If you can get your genetics right, you will be successful’ –... 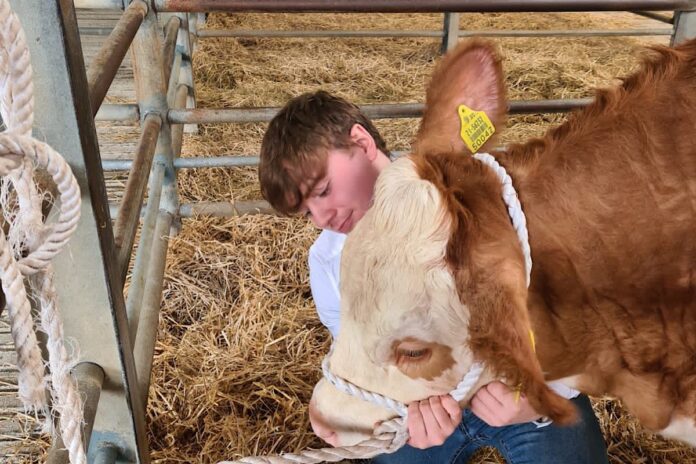 ‘If you can get your genetics right, you will be successful’ – pedigree breeder (22)

Showing cattle was always Cavan farmer Michael Sheridan’s desire from a tender age, and with this, he established his own pedigree herd under the Dungimmon prefix just over one decade ago.

The Mountnugent, County Cavan native invested in his first breeding female from the Bridgemount herd at an Irish Simmental Cattle Society premier sale.

He expanded his herd with a further breeding female purchase from Garrett Behan in 2015 and an in-calf heifer at Hillcrest Simmentals’ dispersal sale in September 2019.

The Sheridans farm two pedigree Simmental cows and then also a Limousin-cross commercial cow which came from Jalex Livestock, alongside 38 Mule-cross Cheviot-cross and Belclare commercial ewes on 12- acres of owned land.

Michael’s father kept milking goats until 2012 and then invested in 30 ewes.

Commenting on the switch from goats to sheep, Michael told That’s Farming:

“I suppose we were set up for that sort of size of animal, so we got into sheep instead.”

This summer, Michael graduated with a Bachelor of Science degree from Maynooth University and plans to undertake an MSc (Agr) in sustainable agriculture and rural development at UCD.

“Every generation would have farmed from my father’s side, and my uncle milks cows on the home farm as well. So, it is a family thing, really.”

He favours the Simmental breed because of its “good” temperament, maternal characteristics, conformation, and docile nature.

The farm carries out all AI since 2011, using bulls such as Kilbride Farm Dragoon 12 (ZKF), Anatrim Bodybuilder (AYX), and Cairnview Snazzy (S628).

They use one round of AI on heifers and a second round on repeats, and Eddie Lynch scans the females six weeks after service. The Sheridans aim to serve heifers on the second cycle.

“We would not have the cow numbers to justify having a stock bull.”

Commenting on why they chose AI, Michael said:

The family hope to produce a bull in the future for an AI station and is also toying with the idea of ET work to increase cow numbers.

They calf their pedigree and commercial cows indoors and outdoors during May with calving cameras in sheds for indoor calving and cows in a field beside the house for outdoor calving.

According to the family, the herd’s calving interval is around 365 days, and the bonus of choosing the Simmental breed is they do not need to intervene with calving, he outlined.

The farm calves down their heifers at 24-months-old. “It lets them come into a good size themselves that they are not too small, and if it is a big calf, they are able to deal with it themselves.”

They sell their male progeny as weanlings in Ballyjamesduff Co-operative Mart Limited and buy in heifers annually.

In March 2021, at the Irish Simmental Cattle Society premier sale, they secured €2,950 for Dungimmon Maizy, who featured the highest price for a heifer on the day.

“In my opinion, it is hard to sell bulls, but heifers are very easily sold, and bulls are a bit harder.”

“I suppose you have a lot more bulls than you would heifers, and when a man/woman buys a bull, he/she is not going to need to buy another one the next year.”

“People seem to like Simmental bulls when I have been selling them as weanlings. I never had any problem selling them.”

“Bull sales always go well at premier sales, and there is always a good trade for bulls, and it seems people still want to have a Simmental bull.”

“I feel like the Simmental breed is in a good position. There is always good trade at sales and demand in marts from what I have seen when I have been selling.”

Michael and his family show cattle “for enjoyment” at agricultural shows with various accolades under their belt with their long-term goal to achieve champion.

The Irish Simmental Cattle Society member commented on what it takes to become successful in pedigree cattle breeding.

“You have to pick the right bull for the right cow. You have to be so careful doing that, and that is where it really is in your genetics.”

“If you can get your genetics right, you will be successful.”

“What really inspired me was that my father would have always shown cattle when he was younger, and that is really what I wanted to do, so that is how I ended up in starting with the pedigree cattle then.”

Grassland management is “a very important” practice on the farm. The family manages this through a rotational paddock system for cattle and sheep.

Michael intends to increase cow numbers to five as his long-term goal and push ewe numbers in a few years. He outlined that as a 22-year-old, he has “lots more time to plan out the farm”.

He added the two enterprises “seem to work well” with cattle, his hobby and sheep, the main enterprise on the farm.

“Suckler farming is going to have to keep going. Things are getting very hard at the minute, and everything is very expensive, but hopefully, that is just a moment in time, and things will improve.”

“Prices are good, but everything is expensive to get to that point. So, I suppose input costs are impacting me the same way they are hitting everyone else.”

“Meal is up in price on every other year for selling lambs, but at least prices are up, which is the whole thing,” the suckler farmer concluded.