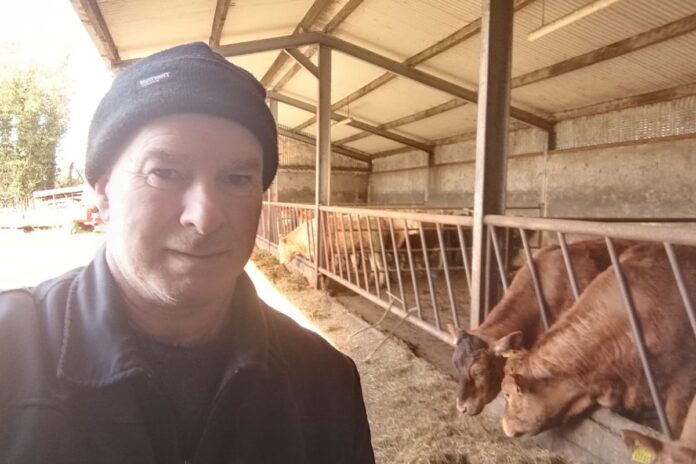 ‘I find, on average, the five-star suckler cow is a better cow’

In this week’s Suckler Focus, That’s Farming, speaks to Maurice Brady, chairman of Cavan IFA and farmer. He discusses the €uro-star beef index in suckler farming, changing his calving system, aiming for €3.00/kg for bullocks, input costs and the CAP.

Maurice Brady, chairman of Cavan IFA, from Laragh, County Cavan, farms 90 Limousin and Charolais cattle (including followers) on 100-acres (25-acres of which, he leases).

He grew up on a mixed drystock, dairy, pig and sheep enterprise and returned to his home farm in the late 1980s after completing his Green Cert at St Patrick’s Agricultural College in Monaghan.

During the early 1990s, he introduced a Limousin stock bull to the herd by purchasing a stock bull and has remained faithful to the breed ever since.

He strives to breed an R grade Limousin cow weighing 650kgs, with a “good” mothering ability.

“I think they are good fleshy cattle and are a good muscley cow. In my eyes, you can cross them on any cow, and that would always bring a decent calf and a bit of colour,” he told That’s Farming.

“In my opinion, the Limousins always kill out well. I even killed heifers this year that achieved kill-out percentages of up to 60%. So, they kill out well when you get them to the factory stage.”

“Overall, I am happy with the €urostars. I have a few cows that are two or three-star cows that still seem to be doing a good enough job.”

“I find, on average, the five-star suckler cow is a better cow, and usually it turns out that way. My herd average is about €105/cow. I find €uro-stars are a good guide.” 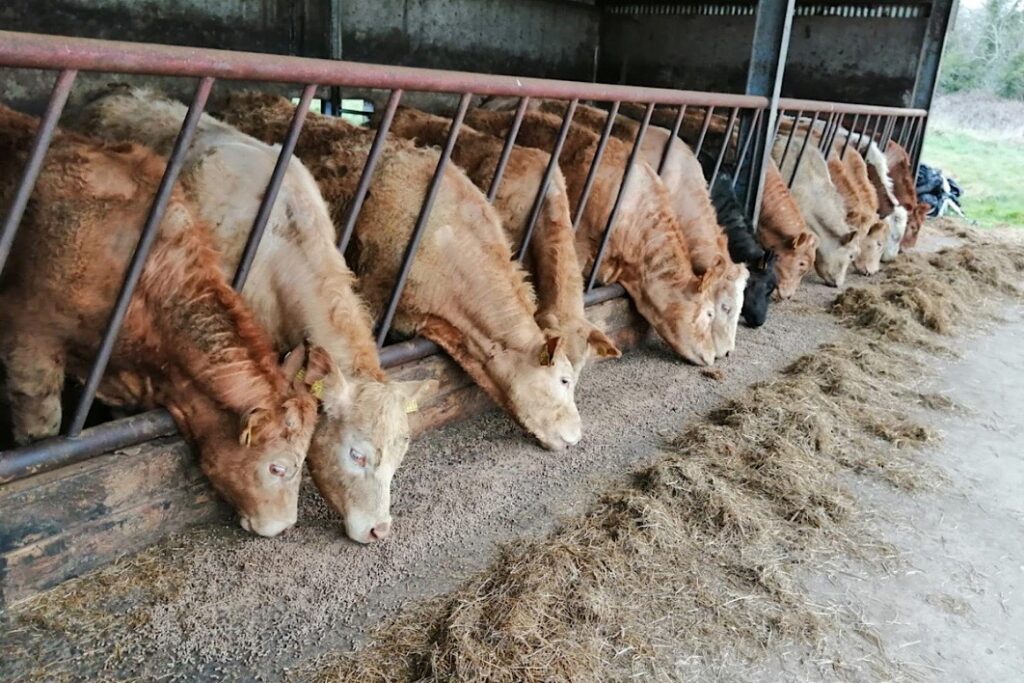 Maurice completes two rounds of AI on his heifers and cows and uses a Charolais stock bull, a Goldstar Ludwig son, to mop up.

“The Charolais stock bull runs with the cows on an out farm. It will take him about ten weeks or so. He goes out at the end of May, and he is back in the shed in the middle of August. I put him in with a dry cow, and that is it.”

“AI’ing cows is successful enough for me because I try to do smaller numbers and keep an eye on them.”

Commenting on the choice of AI straws available to farmers, he said: “There are plenty of AI straws in the genetic pool. It gives you a bit of flexibility, especially getting heifers in-calf. Putting an easy calving bull on them makes a big difference.” 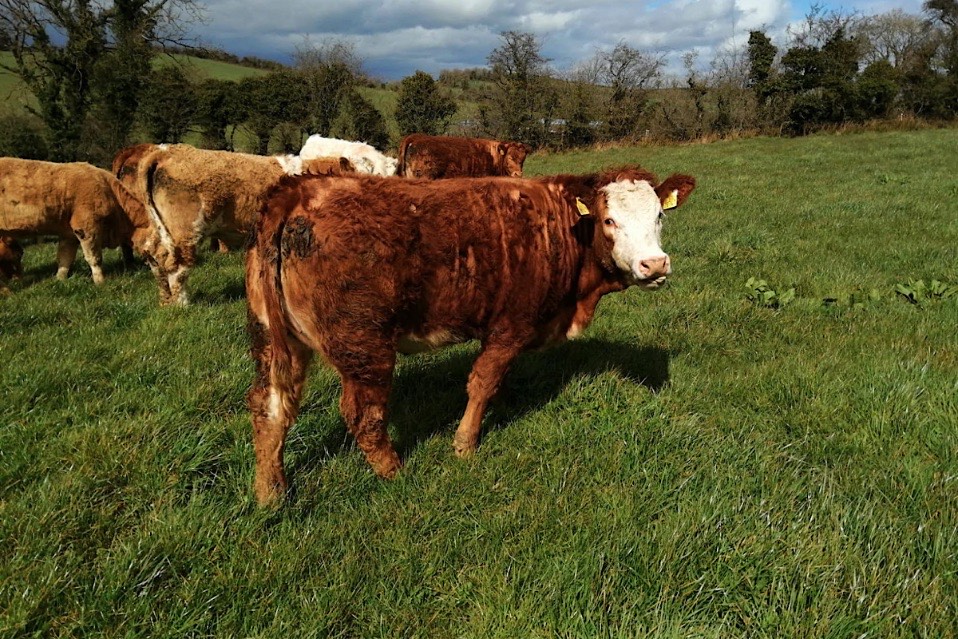 Maurice calves his cows from March 1st to April 25th – which enables him to have compact calving and lets pairs out to grass 4-5 days post-calving.

He achieves a compact calving period by removing his stock bull at the appropriate periods.

“I used to have 40-45 cows, which I calved in February. However, I found that spring came with bad weather a couple of years ago, and you were up with a few calves in the shed.”

“Then, some of the calves would develop a scour, and they would all have it the next day. I got away from that system because it is much better to get them outdoors if you can.”

According to Maurice, cows require very little intervention during calving, and he uses homemade calving cameras.

“I used to calf them at two-and-a-half. However, I have been going for the two-year-old the last couple of years, and it seems to be working out fine.”

“I found that if you do not calf the cow at two-year-old, you are going to have her for another year until she is three-year-old, and you are only doing one calving season.” 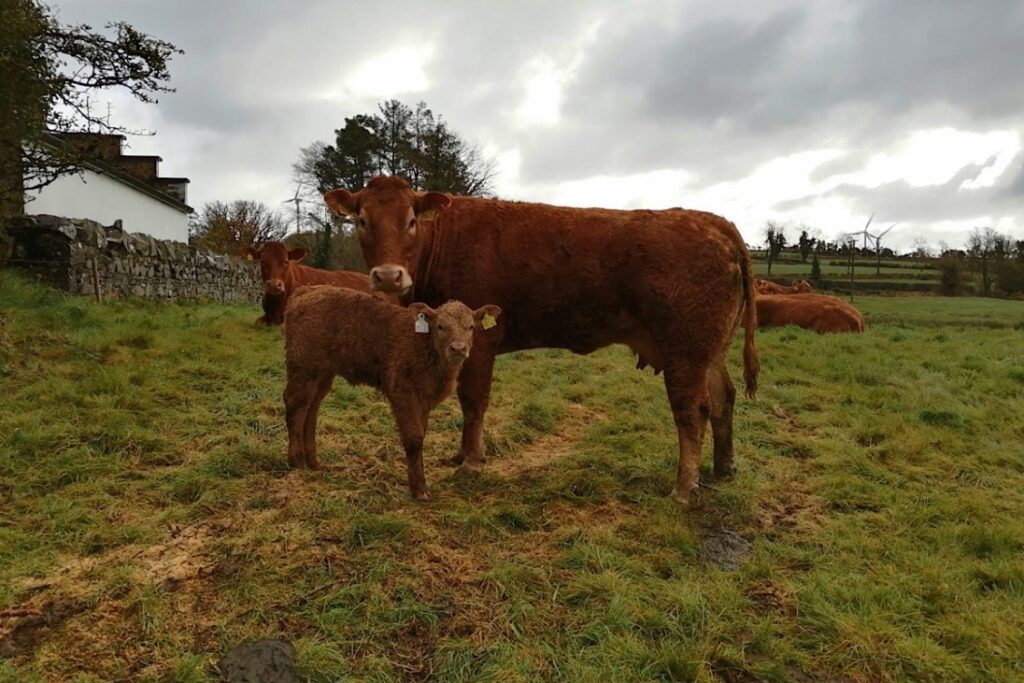 He keeps all his replacements and buys up to 25 Charolais, Limousin and Hereford heifers, weighing up to 450kgs, at his local mart.

Maurice has a strict culling policy for cows over nine-years-old, lame or with fertility issues – that he slaughters in Liffey Meats, Cavan.

Furthermore, he also kills most of his female progeny in Liffey Meats, Cavan.

Maurice sells most of his bullocks off at 12-months at the local mart in the spring. In addition, he sells up to 6 weanling bulls (aged 7-8-months) at weanling sales in Cootehill Livestock Mart.

“There has been a good demand for heifers and bulls. If you have a bit of quality, you will always get them sold. I think in another few weeks, when the grass starts growing strongly, it always improves the mart trade.”

“The price heifers are now is the price, they needed to be last year. If we could have had this price last year, they would have been a great price.”

“The price they are now is hardly keeping in touch with the costs that are rising all the time. So, it is very hard to make much progress because you are fighting against costs all the time.”

“Meal prices are sitting at €400/t, and silage and fertiliser prices have gone through the roof this year.” 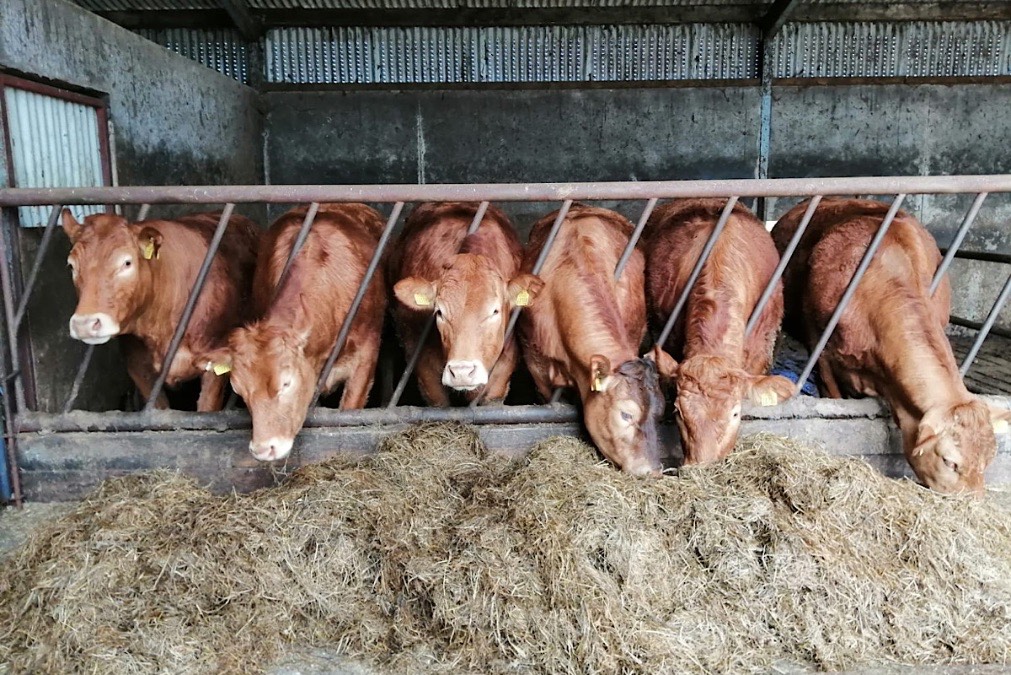 The Cavan farmer strip grazes his fields and uses temporary fencing to manage his grassland.

“The cows with the stock bull are running on an out farm, so they go around three or four divisions. The heifers and younger cattle are at home and in groups of 15-20.”

“They are grazed around temporary paddocks until the first half of the year, and then when silage is cut, they get out onto the silage fields.”

“Besides, I hope to get out some urea a week or ten days after that to grow the silage crop.” 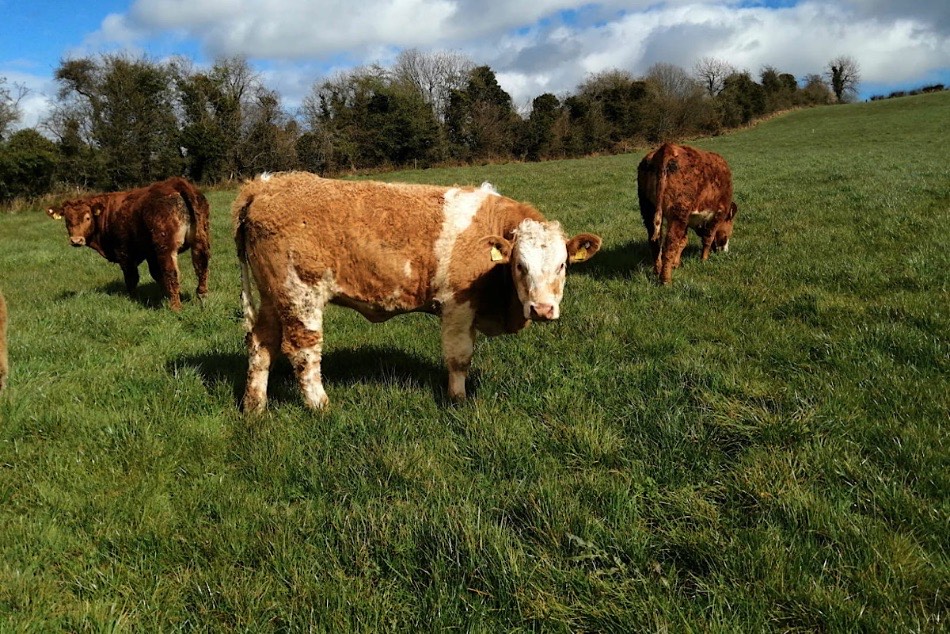 Maurice plans to maintain his cattle numbers and consider embracing other farming options such as contract rearing or a calf-to-beef system.

“My view on the future of sucker farming is probably that it is not great. I would have to see how these new schemes bed in, but only for a couple of schemes; it would be no good at all.”

“The future depends on how beef prices keep going at the second half of this year and the weanling trade. The weanling trade would want to be strong this year, but it remains to be seen whether it will or not.”

“The cost of finishing cattle has gone through the roof as well. So, it is a mixed outlook at the minute.”

“In my opinion, the challenges are costs; there is no doubt about that,  and the cuts in the CAP payment are not helping us either.”

“From 2023 onwards, CAP, as far as I am concerned, means more and more cuts, and that is a huge challenge for drystock farmers,” the Cavan farmer concluded.