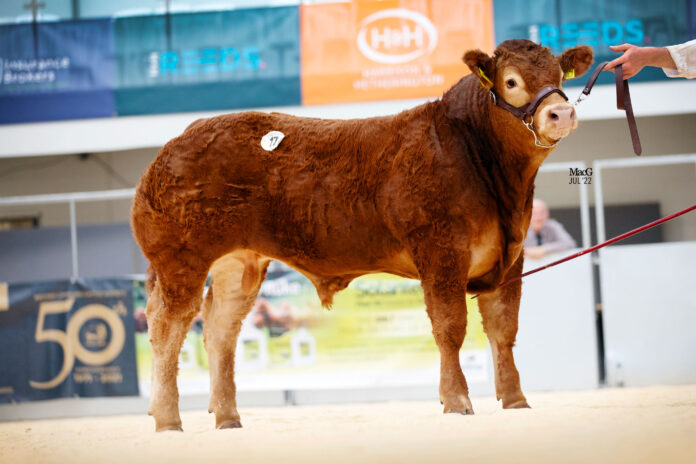 Superb is by the noted Derrygullinane Kingbull and out of Jalex Missy,  a home-bred cow bred by Bassingfield Hobama and Trueman Isabella, a full sister to the well-known Trueman Idol.

The next best at 22,000gns was Trueman Serenata, an April 2021 heifer from H Savage and Sons, Northern Ireland.

By the herd’s stock bull, Telfers Munster, Serenata won the best heifer calf in the NI Herd Competition in 2021, as did her dam – Trueman Layla – in 2015.

With a myostatin genotype of F94L/Q204X, she has a Retail Value in the Top 1% of the breed. She now heads to the home of Mr A J Ewing, Dumbretton, Annan, Dumfriesshire.

By Gunnerfleet Hicks and out of Allanfauld Jolene, Sancho has a Myostatin genotype of F94L/Q204X.

Two lots changed hands for 16,000gns, and the first up was Cowin Supreme from WD Dyfan and Carol James from Carmarthen.

This bull was born in January 2021 by the famous Ampertaine Foreman and has a myostatin genotype of F94L/F94L.

He is out of the home-bred cow, Cowin India, going back to Loosebeare Fantastic and Objat, as his top 10% growth EBVs show.

Second in the ring at 16,000gns was heifer, Charlottes Sapphire, a further consignment from Miss C Martin, Dromore, County Down.

Born in April 2021 and with a myostatin genotype of F94L/Q204X, this heifer is no stranger to many.

By Elite Forever Brill and out of an Irish dam, Roundhill Kmelodie1595, the heifer heads to Ireland and the home of the noted Ardnacrusha pedigree herd of Donal Maloney, County Clare.

Two consignments from BLCS president Craig Ridley of the Haltcliffe herd rounded off the seven of eleven lots that went under the hammer for more than five figures on the day.

First in the ring was Haltcliffe Rachel, an August-2020-born heifer with a myostatin genotype of F94L/Nt821.

She is by Aultside Meanmachine and out of the homebred Haltcliffe Madison, a pedigree littered with sales in excess of 40,000gns on both sides.

The first animal in the ring, she sold for 15,000gns to Sr J Nachón, from Villaviciosa in Spain.

Second in the ring from Craig Ridley was the October 2020-born Haltcliffe Ruth, who sold for 10,000gns.

With a myostatin genotype of F94L/Q204X, she is by the herd’s stock bull Westpit Omaha, whose early progeny sales have been highly successful, and who was later to be seen in the anniversary national show.

Her dam is Haltcliffe Maybe, who goes back to the herd’s famous French sire, Sympa

She is destined for the Glenmarshal pedigree herd in Newry, Northern Ireland, property of T Shields.

Rounding off the sale were two lots of embryos. The first were a pair consigned by EH Pennie and Son of the Sarkley pedigree herd, Montgomery, Powys.

These were out of Sarkley Glorianne by Ampertaine Elgin. Therefore, they are bred the same way as the recent world-record breaker Graiggoch Rambo who sold for 180,000gns.

These made for 7,000gns for the pair to M Cormack, Meadow View, Stoke Prior, Leominster.

These are bred out of a different record-breaker this time – the 250,000gns Wilodge Poshspice – and sired by Goldies Orinocco and sold for 6,000gns.

Summary from sale at Borderway Mart: