That's FarmingThat\'s Farming Irelands Largest Farming News, Properties and Classifieds Network
HomeBeef‘Farming is hard to get an income from unless you are on... 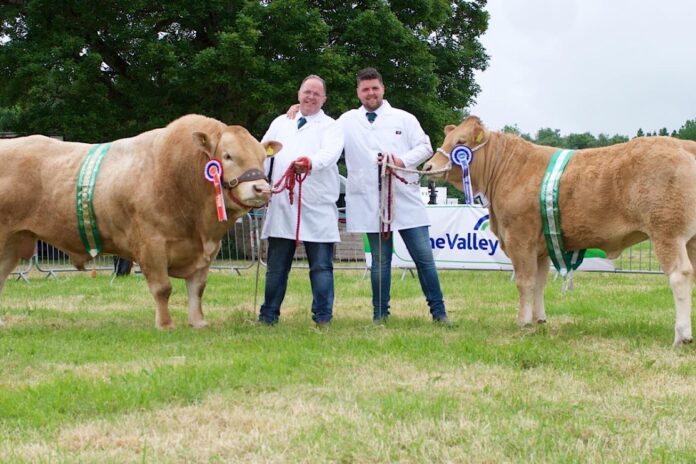 In this week’s Suckler Focus, That’s Farming, speaks to Gary McCelland, Kilcoo. He discusses achieving around 2,000 gns for progeny, how he is cutting the farm’s fertiliser costs and fodder usage and the future of suckler farming.

The earnings from selling white turkeys oven-ready to his locality supported Gary Mcclelland’s venture into farming.

He re-invested these earnings in Friesian-cross calves from Rathfriland Farmers’ Cooperative Society Ltd, which he bucket-fed and sold at 14-months-old.

“I sold calves at 14-months-old and did that for three years to build up enough money to buy my first Blonde heifer. I was in school then,” Gary told That’s Farming.

“I like a medium-sized Blonde d’Aquitaine cow with good feet, milk, and easy fleshed.”

The farm operated a Hereford-cross commercial suckler cow herd when Gary was young.

He chose the Blonde d’Aquitaine breed because of their docility, ease of calving and a desire to explore “something different”. 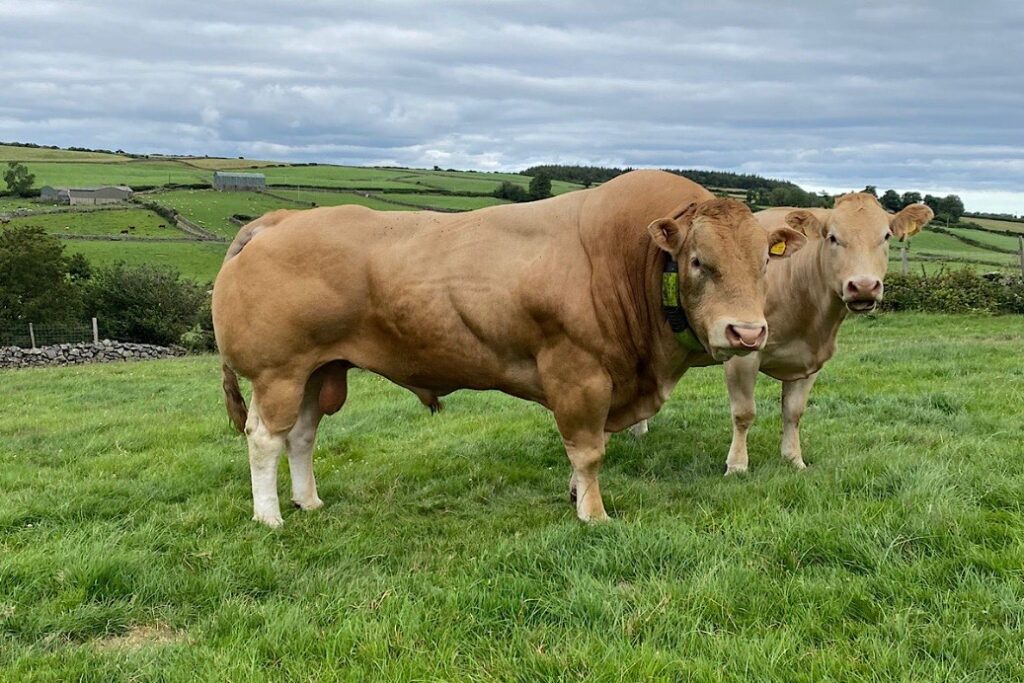 Gary is a DIY AI technician, who carried out the farm’s breeding programme since the herd’s establishment.

He AI’d two cows this year with a stock bull he invested in two years ago, Bridge Obama, from Bridge Blondes, Manchester serving the rest.

Gary introduces the bull as a group, removing him from the herd to have calving commencing from March onwards.

“I sold a bull two weeks ago, Moneyscalp Samson and I have semen from him. I will use him on a couple of cows because he returns to Whistley Dollar, a well-thought-of bull and a son of him.”

“When choosing an AI sire, I select by the bull’s faults and his progeny. I would not look at EBV (Estimated Breeding Values) indexes or anything like that, as they do not interest me. There are only five bulls in Northern Ireland in AI centres.”

He calves from early March, planning to have calves ready to turn out to pastures in the summer and house at the end of November or early December and, at this stage, to be ready for weaning. According to Gary, cows require “little” intervention during calving.

Heifers calf from the end of April start of May from 26-27-months-old after cows which allocates him space to watch them “better” and have a supply of bulls coming through at the same age to sell at sales or off-farm.

“Many farmers like  heifers calving around two years old, but I like to grow them more and let them mature.” 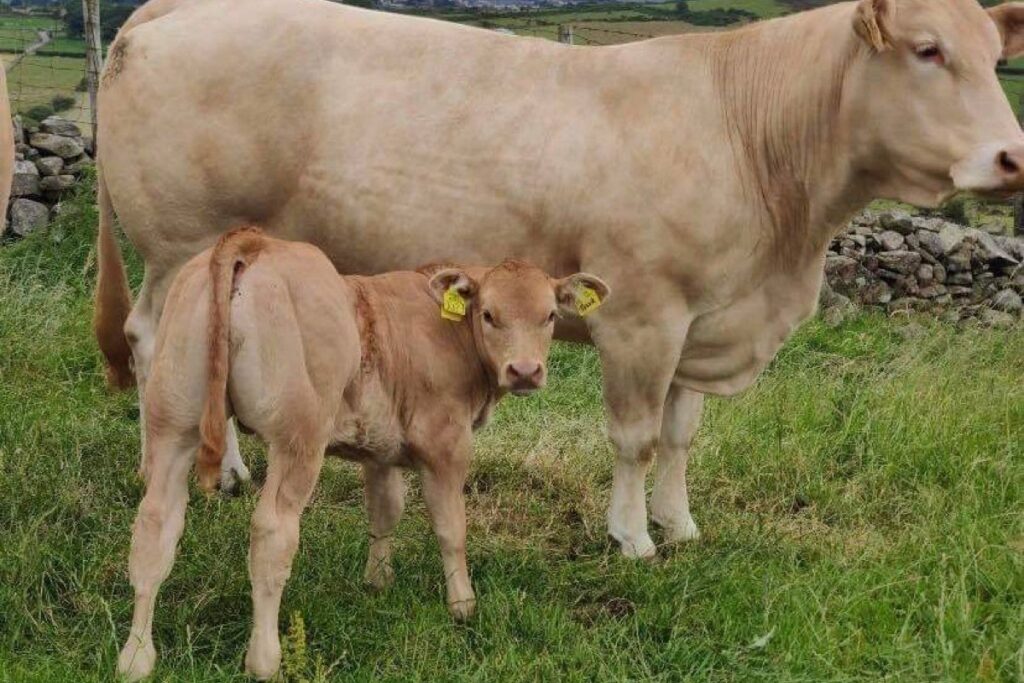 He culls cows for mastitis or age at Hilltown Sales Yard or Markethill Mart – in line with the farm’s strict culling policy.

Gary retains up to four replacements annually and sells up to two breeding females at the Northern Ireland Blonde Cattle Club sales, generally achieving around 2,000 gns for up to 16-months-old breeding females.

He places many of his choices on good locomotion, feet and the dam’s maternal characteristics when choosing replacements.

In addition, he sells around six bulls annually at club sales and progeny not eligible for breeding at his local mart.

Both father and son are committee members of the breed’s club, with Gary, a member of the British Blonde Society.

He attends most agricultural shows, with varying levels of success, including show herd of the year and young handler of the year.

He manages his grassland by giving cattle 1.5-2.0-acre paddocks at a time, allocating a fresh supply for three days, and splitting up more extensive fields with an electric fence, with the most significant land parcel 2.5-acres.

While he does not measure grass, he aims to reseed land annually.

The farm has a wide range of grass varieties. Gary sowed perennial ryegrass in three areas, white clover in one and crop silage with peas, and barley undersowed (with grass) in another area.

He sows the rocky ground with forage rape for use until housing.

“I try to get the most out of grassland using more slurry this year other than fertiliser. I reseeded kale this year because I do not have enough silage for the wintertime, which will keep cattle outside grazing longer.”

“After they eat the kale, forage rape and bales, calves will be ready to wean so I can split them off and bring them into the shed. Also, it will reduce silage costs because they are out eating the kale and forage rape.” 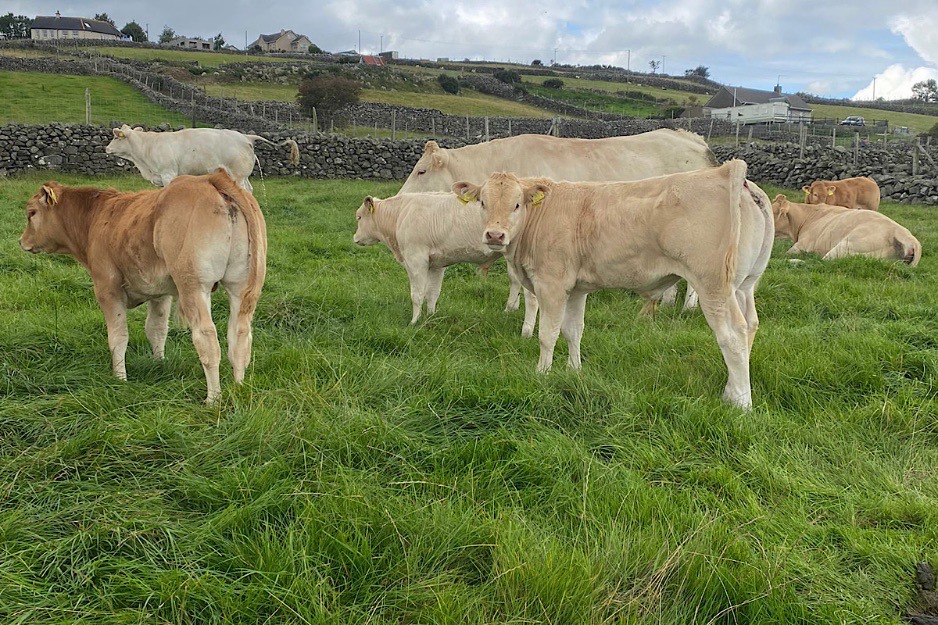 He believes that to be successful in pedigree cattle breeding, you require animals with correct feet, temperament, and easy fleshing ability.

In addition, Gary noted these are his three main factors for selling bulls.

He plans to increase the herd to 30 breeding females and ewe numbers to 15 if additional land becomes available.

“With how things are going with rising fertiliser and meal prices, suckler farming could go downhill very easily. But, moreover, it seems that the government is pushing out the wee farmer and keeping on the big farmer.”

“I would not be able to rely on farming without my construction job. So, I feel you need a second income to farm because farming is hard to get an income from unless you are on a big scale alone,” he concluded.

- Advertisement -
Previous article
How dog owners can have a mud-free home
Next article
The future of farming: the case for renewable projects