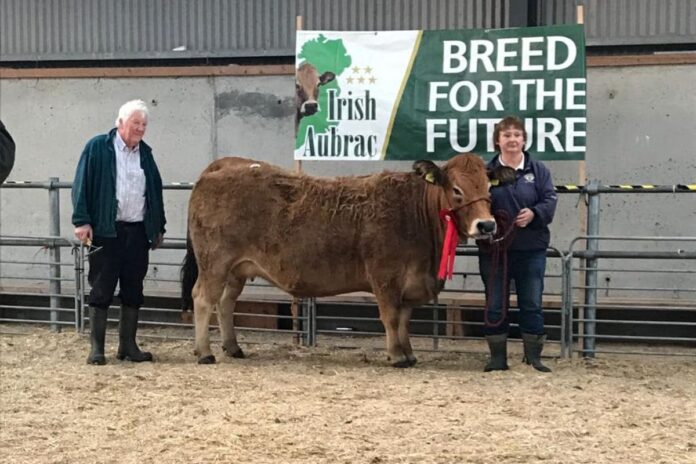 That is according to the society’s chairman, who reported that 82% of entries found new homes, which included six out of seven bulls and 47 out of 57 females.

Top of the town at €4,150 was February-2020-born in-calf heifer, Altamont Penny, property of Leo and Bridget Dooley.

A heifer, Johnstown Praise 1818, by the aforementioned Johnstown Ian 1039, from the herd of Francis Donohoe, fetched €3,000.

According to Donnellan, the sale drew a “very large” attendance of farmers, cattle breeders, and members of the public.

He said this is reflected in the price levels and the fact that over 80% of the stock on offer sold under Tom Cox’s hammer.

Donnellan remarked: “A growing community of Aubrac breeders and farmers from right across the spectrum – from dairying to suckler farming and beef finishing – are recognising the important characteristics of Aubrac cattle which are so uniquely suited to farming in Ireland.”

“We are seeing a growing number of dairy farmers choosing Aubrac for their beef cross selection, mainly because of their easy calving, short gestation, and high feed conversion.”

“We are also seeing a growing number of Aubrac cattle in the suckler herd, which bodes well for the future supply of Aubrac breeding cattle.”

“However, the greatest opportunity will come as growing numbers of consumers start to see the superior taste difference that Aubrac beef provides,” Donnellan concluded.

Ahead of the sale, we heard from Jim Stafford, who first encountered the breed almost twenty years ago.

Read this news article on That’s Farming, where he discusses converting to organics, working off-farm and why he favours this breed of hardy cattle that traces its genetic origins back to the southern part of the Central Massif in France.

See more about the breed on the Irish Aubrac Cattle Society’s website.

- Advertisement -
Previous article
Irish mothers spend 17.02% of their wages on early childcare
Next article
Gardaí seize €249,000 worth of horse tranquilizer in BBQ set