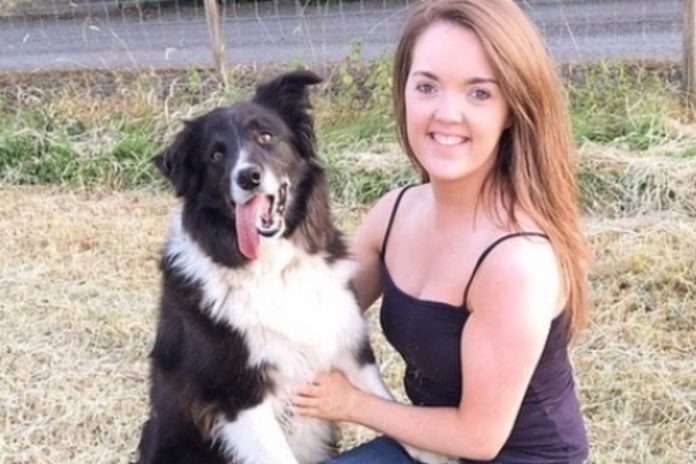 ‘The highlight of the farming calendar is lambing time’

In this week’s Student Focus segment, That’s Farming profiles Clare Mawhinney, a fifth-generation farmer who hails from a suckler and sheep farm and studies agriculture with animal science at Harper Adams University.

The 24-year-old Kells, County Antrim native, grew up on a pig and dairy farm, which has since transitioned to sucklers and sheep. She has equal input in the 80-acre mixed enterprise, with her father, Johnny, mother, Vivien, and sister, Anna.

“When I was growing up, we only had suckler cows, so from no age, my parents put my sister and I into a hole with a stick in our hand and told us not to let any get past us when they were moving them. It was the perfect childhood, although that has not changed,” she told That’s Farming.

The family previously farmed pedigree Blonde d’Aquitane cows but have moved to a different cow-type, dairy-bred beef breeding females, which a Limousin stock bull serves. They sell subsequent progeny at their local mart between 6-12 months of age.

On the sheep farming front, they farm mainly Texel-cross ewes and Mules, with two Texels and one Blue Leicester-cross-Texel rams dominating the pastures.

“We sell the majority of store lambs to the local market, with some going as fat lambs. We keep most ewe lambs as replacements for the following year.”

“To note, we plan on getting another two rams this year which will probably be another Texel-cross-Blue-Leicester, to replace the one we have currently, and a Suffolk. 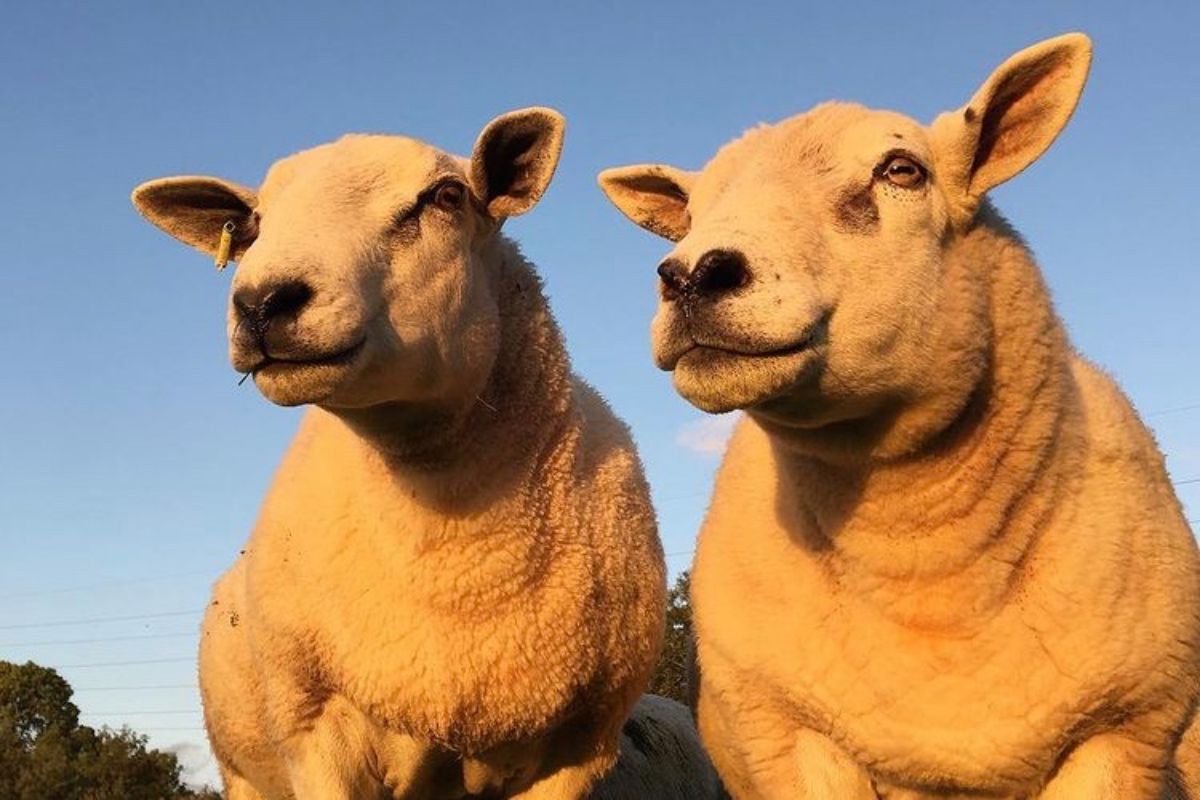 They graze sheep for most of the year and bring ewes indoors 2-3 weeks before lambing, which occurs over 3-4 weeks. Once ewes lamb, the family turn them out to pasture when their progeny are approximately one-week-old – weather permitting.

“We put ewes back out again onto grass, feeding them supplementary concentrates. Furthermore, we sell most lambs at around 20-22kg at the local livestock market.”

“On the other hand, we house cattle throughout winter and feed them our own silage (round bales). Besides, we feed calves silage and a course calf concentrate mix. We bale approximately 25-acres of grassland twice a year for our personal use, selling any surplus.” the animal science student added.

“The highlight of the farming calendar is lambing time for me. Bringing new life into the world and seeing lambs skipping about the fields in spring is such a nice sight to see. It is a whole family effort, making it a delightful time of year.”

“We all chip in and have our own jobs, with my dad focusing more on the suckler side whilst my mum, sister, and I mainly look after the sheep.”

“An improved layout of sheds and the addition of livestock cameras has allowed us to have a smoother lambing period, which ultimately is less time-consuming so we can assign more time to the other enterprise.” 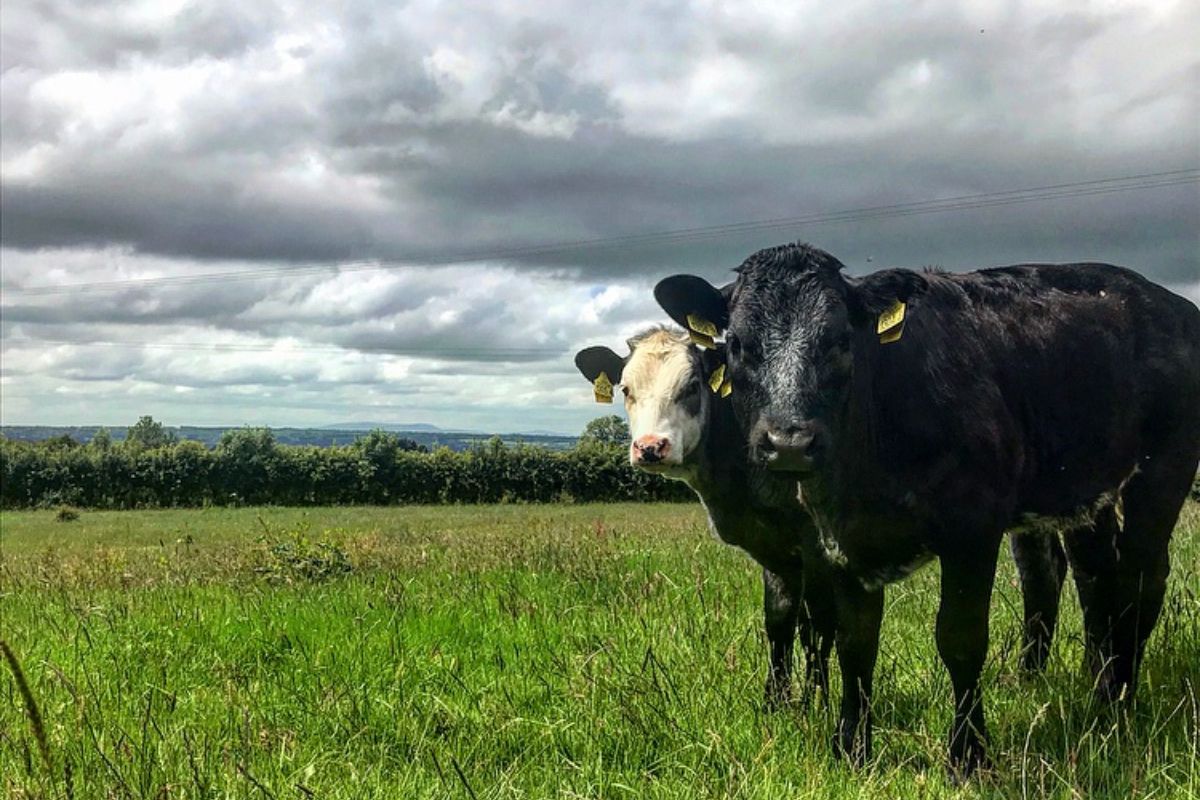 Clare juggles her farming commitments with her studies at Harper Adams University, Newport, Shropshire, England, having enrolled in the course in 2017.

The fourth-year BSc (Hons) Agriculture with Animal Science degree student selected this course as she “wanted to experience living away from home”.

“Besides, I knew several people that had gone to Harper before, and I heard good reports about its facilities, teaching and a good social life.”

“Harper has excellent laboratory facilities, and you have several classes to use these services included in animal nutrition, animal health and genetics modules. Assessments are in the form of assignments and exams as well as a dissertation in final year.”

Before enrolling in her current course, the 24-year-old attained a two-year foundation degree in agriculture and rural studies from Greenmount College.

As part of her course, she completed a summer placement at United Feeds LTD. She worked as a laboratory assistant with responsibility for testing raw materials, processing customer orders and completing a farm grass trial, among other tasks.

She discovered she was more interested in the course’s animal science, which led her to opt for the animal science route. Some modules have included sustainable animal production systems, farm animal health, animal nutrition and animal improvements and bioethics.

She said that the inclusion of a compulsory placement year was also appealing as it would “provide me with experience from a global company, which would introduce me to many new contacts and opportunities that I would not have got anywhere else”. 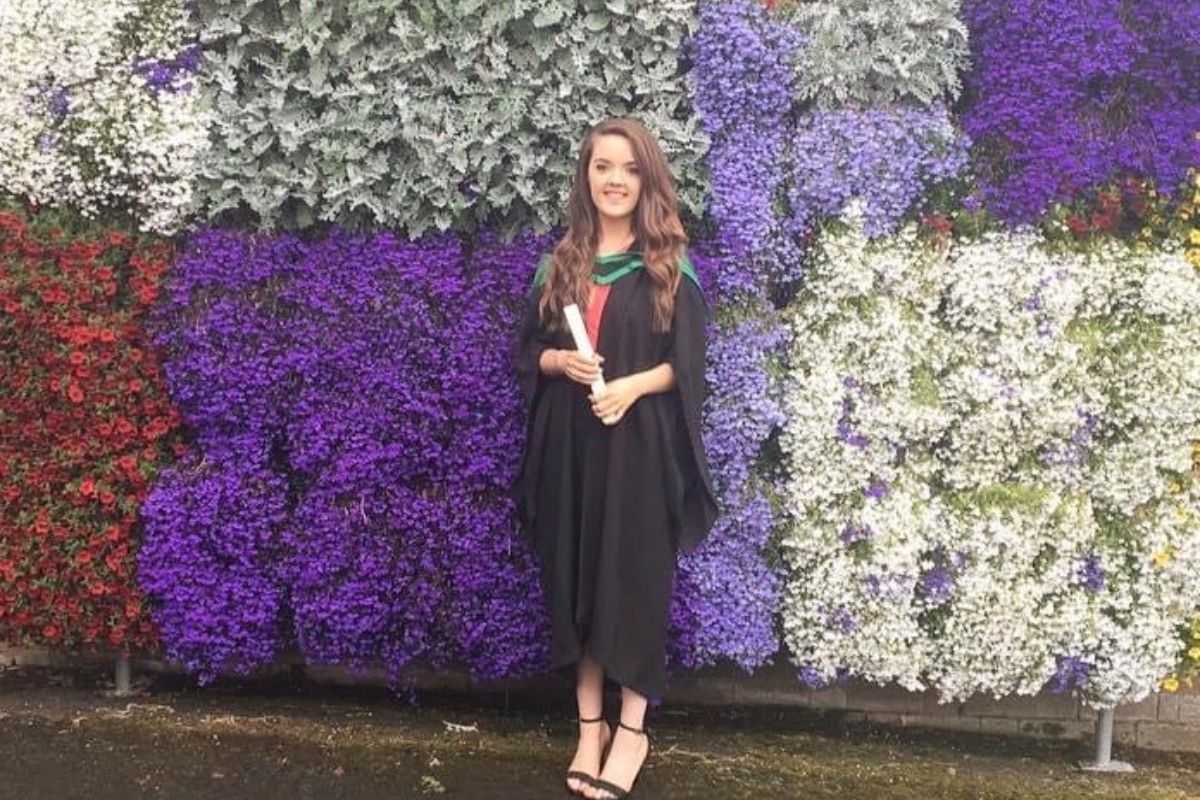 In her third year at Harper Adams, she completed a placement year with Trouw Nutrition GB in Derbyshire, England. The company assigned her the role of a technical trainee, assisting both its ruminant and monogastric teams.

“Here I compiled mineral and vitamin training booklets and was in charge of an annual report called CerealWatch, highlighting barley and weight yields and quality throughout Great Britain.”

“I tested premixes, calf milk replacers, forage and straights in the lab using NIR machines and other pieces of equipment. Furthermore, I conducted on-farm calls to test a handheld NIR and carried out a trial on the use of a product called Selko TMR in the preservation of total mixed ration, among other jobs.”

“Placement was the main highlight for me. I got to experience many different departments in the business and availed of great opportunities to get an insight into the global animal nutrition sector. I developed many new skills that will help with my future career aspirations.”

The Antrim native revealed she has enjoyed the course so far, with a mix of lectures, lab classes and on-farm teaching. However, her final year, along with the challenges the Covid-19 pandemic presents, has proved to be more difficult than she thought.

“It is sometimes a challenge to separate home and work life, but as I am close to the finish line. I am very excited to see what is to come after graduation.”

“At the start of the academic year, we attended face-to-face classes, although it was a very strange experience. We all had to wear masks, sanitise our desks on arrival and sit spread out around the classroom. Desk recording/tracking was used to determine who was sitting near someone if they tested positive for Covid, similar to the concept of track and trace.”

“As a result, I had to isolate at one point for two weeks and join classes via Microsoft Teams. Thankfully, I was very familiar with this as I had to complete the last four months of my placement from home using Teams as the main means of communicating with my colleagues, which helped prepare me for university.” 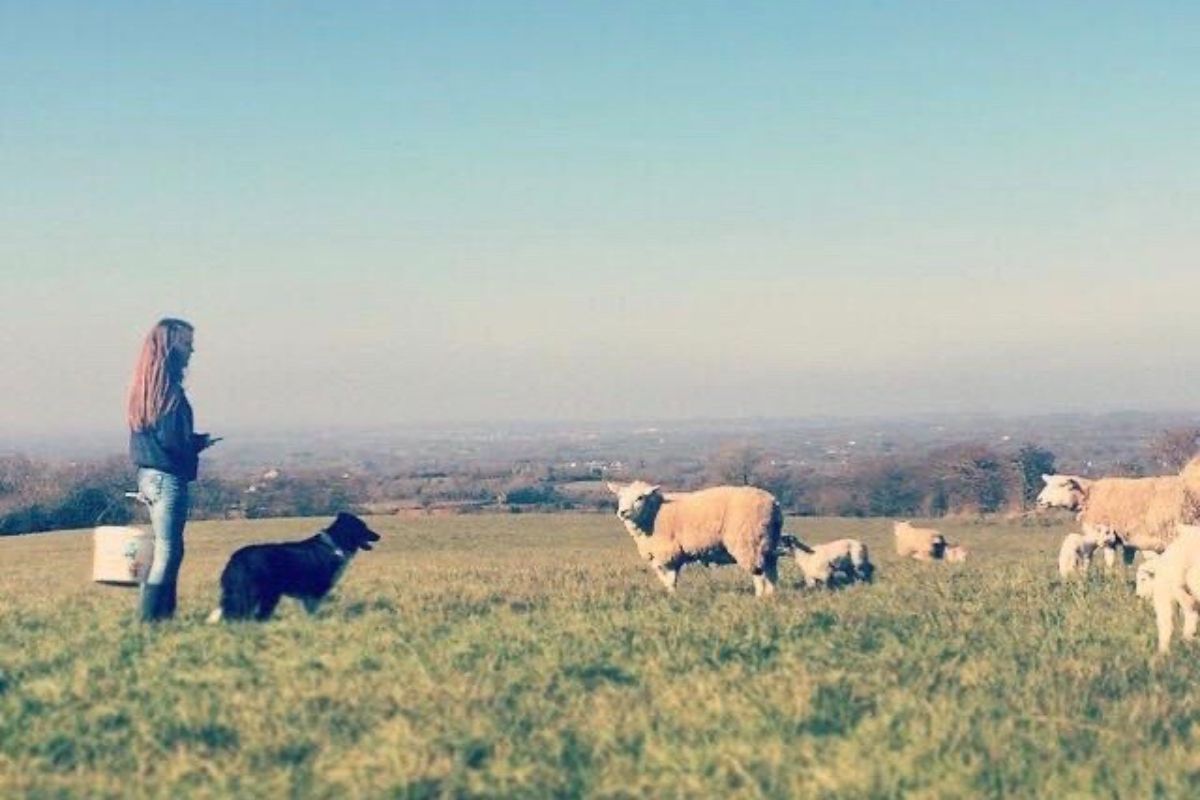 Due to further lockdowns and the government’s advised travel window at the start of December, Clare returned home to Northern Ireland to complete the rest of her classes delivered via Teams.

“The college gave us the option to go back if we feel that it is necessary to complete our studies, but I felt that I could complete everything from home.”

“Although not how I imagined finishing university, it has been the best outcome for me. I can take a break and help out on the farm or go for a walk in the countryside to clear my head and get away from the stresses of university.” 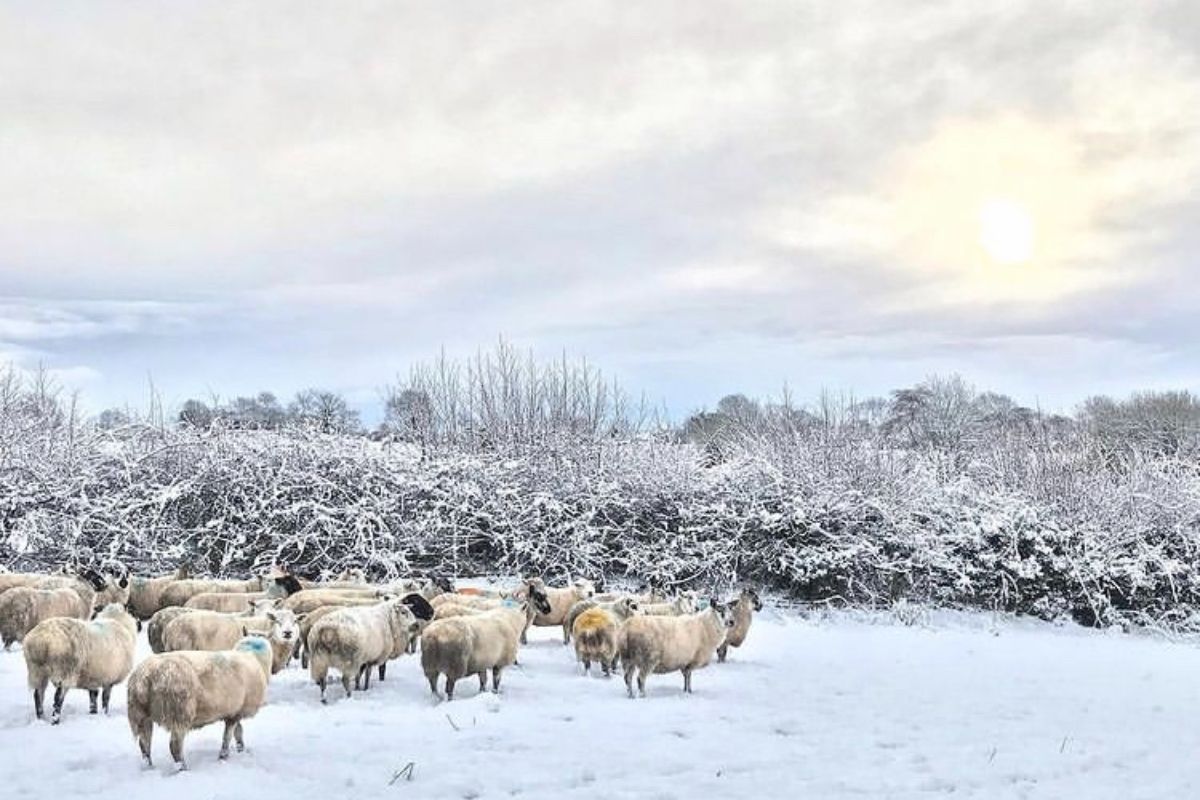 After graduation – her next steps

Career-wise, Clare plans to seek employment in the farm animal nutrition or health sector when she graduates later this year. She aspires to follow in her father’s footsteps; he works full-time off-farm and farms in the evening and weekend.

The young farmer plans to expand the farm’s sheep enterprise with intentions to double numbers and possibly add pedigree Texels or Dorsets to the flock, when she attains her degree.

Pre-Covid, she had planned to travel to Australia and New Zealand once she had completed her degree to experience large-scale farming enterprises and to venture to parts of the world that she had never experienced before.

Although she has put this on hold for now, she hopes she will have the opportunity to do so in the future.

“I am very proud to be a part of the farming community, and I hope to be able to progress in my career and be able to use the knowledge I have acquired from my insight of the sector to focus on the diversification, innovation and sustainability of not only the agriculture industry but my own family business to help bring it into the 21st century.”

“The agricultural sector is ever-changing, with gender stereotypes becoming fewer. For the most part, I have been treated the same as my male counterparts.”

“I think gender stereotypes are influenced by your generation, with older generations viewing farming as a man’s world. Women, today in agriculture, are removing this stigma and making a change for the better. “

“Further promote women in agriculture to the next generations encouraging them to fulfil a career in the industry, whether it be manual labour on a farm or a desk-based role in one of the many agricultural industries. Each person in the sector has a vital part in ensuring its success, from farmers and nutritionists to researchers and agronomists.

“Girls can do it too. Jobs in agriculture, although perceived to be male-orientated, are not defined by your gender. If you have a passion for something, pursue it and don’t let anyone tell you differently,” the animal science student concluded.

Are you a woman in agriculture? To share your story, email – [email protected].