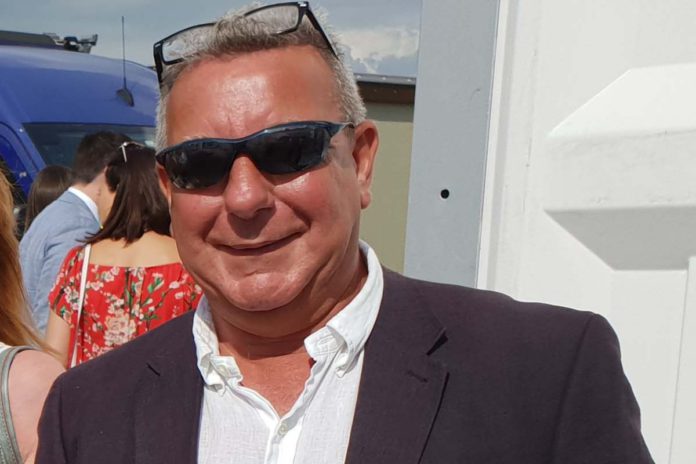 Frazier was raised on a family farm, spanning four generations, in Worcestershire, Middle England. His grandfather specialised in soft fruit and poultry, whilst his father ran a large barley beef unit and fattened 4,000 pigs annually.

Speaking to That’s Farming, Andy Frazier said: “I left school to work on the farm at a time when grain prices started to rocket, so the business turned more sheep and arable.”

“I started breeding pedigree Bleu du Maines with my father, which were highly successful. We then moved on to Beltex, where we would import several sheep from Belgium in the early days of the breed.”

“I also ran a flock of Texels, and my mother bred Badger Faced sheep. Besides, I started showing cattle when I was 10, mainly crossbred commercials.”

He eventually left the farm in his mid-twenties to become a freelance stockman and supplied grooming products, which he shipped in from the USA.

Andy moved to France 14 years ago, where he has a small farm. It is home to a dozen Charollais ewes and a flock of Ryeland sheep that he established recently with his wife.

He now shares his time between there and a seaside house in Fife, farming, running his property firm, writing, and most recently, podcasting.

“I did podcasting for my own satisfaction, to begin with, but soon realised that people, particularly farmers, have times when they are in, say, a tractor or pick-up when they want to hear something more than the dreary news channels.”

“A podcast fills that void if it is on point. I guess Covid-enforced isolation helped where we all had a little more time on our hands.”

“I launched the series early December in what would have been Smithfield show week, so I could gather a few of my old pals and talk about then great days down in Earls Court.”

“Having recently lost a few great mines of information such as Jack Ramsay and Donald Biggar, I realised we really should get some of our generation’s stories on record.”

“I am so thankful for the experience and the friends I have made on this journey. It is nice to put a little bit of that back for others to enjoy.”

He made six episodes talking about the show, and the audience grew very fast, mainly cattle show exhibitors to begin with.

“We then talked about some of the older legendary cattlemen; it was brilliant to discuss what they achieved. This was when our audience widened, and we also did a series on the origins of continental animals from Europe.”

He releases content every Friday, and whilst his listeners are primarily based in the UK and Ireland, he has produced episodes about the USA and Australia.

“Our subjects are varied, but they are well researched and informative. We have fun making them, which I believe spills over to the listener.”

“Up until now, I have done all the recordings, but we have a few guest hosts lined up, particularly to speak with the younger generation. I do all the editing, which is bloody hard work,” he laughed.

He dedicates two days per week to the series, which Harbro Feeds currently sponsor. As many of his guests are farmers, he completes most recordings in the evenings.

“We try to keep to 40 minutes but usually run to nearly an hour. It takes a lot of research, from all kinds of sources; that is a day right there. The editing is time-consuming and tedious, but I have progressed from novice level now!”

“The hardest thing is the technology. I spent part of my career in IT, but still, I battle with the machinery and always cross my fingers that the recording will come out ok.”

“We had a couple of hiccups in the early days when we had to re-record over an hours’ worth. It is never the same the second time, either.”

“The MacGregors at Allanfauld were very popular as they are such talented breeders. I quite liked researching the continental cattle, which was not easy. But it was great discussing the early influential animals and breeders with folks like Robert Laird, Cambwell who had been there from the get-go.”

“One of our early podcasts was on the Chicago Stockyards, the scale of which was mind-boggling. James Alexander from Jalex was extremely switched on. It was so refreshing to hear how someone had embraced the current situation and made it work for them online.”

“There are still loads of folks out there to speak to, especially the youngsters. I never expected it to get to this stage, but now it has. We are on a rollercoaster, and I cannot see the exits steps.”

“We also run a property business which takes up the rest of my time, but I would like to slow down a little. Having said that, I have a few media jobs coming up, and I enjoy that side of things. As well as 40 books, I have also written a few screen scripts that I would love to see produced.”

You can find Toplines and Tales on iTunes, Spotify, and most other music streaming channels, or see Andy Frazier’s website.

- Advertisement -
Previous article
‘The price of machinery is crazy, and contractor rates need to go up a lot’
Next article
Restored Massey and Limousin team up for grabs in charity draw