That's FarmingThat\'s Farming Irelands Largest Farming News, Properties and Classifieds Network
HomeBeef'More than half of my animals will grade Es’

Liam Fitzgerald took the reins of his family farm in 1995, when it was a drystock enterprise and now farms 80 suckler cows alongside his son, William.

They breed pedigree Parthenaise cattle under the Alamira prefix in Mallow, County Cork.

The breed’s physical appearance and colouration caught his eye, which prompted him to venture into Parthenaise cattle 2005.

“Docility is the number one reason I selected the Parthenaise breed, also for their quality and milk ability,” Liam, the owner of the Alamira Parthenaise herd, told That’s Farming.

“For the dairy farmer, the quality of calves will be better. For the suckler farmer, the Parthenaise bull will give him a U based animal if the suckler cow is reasonably good, easy calving.”

“Going back 50-years ago, Parthenaise cattle were of a milking bloodline. They used to milk them in France up until 1968. So, there is plenty of milk in the Parthenaise bloodlines.” 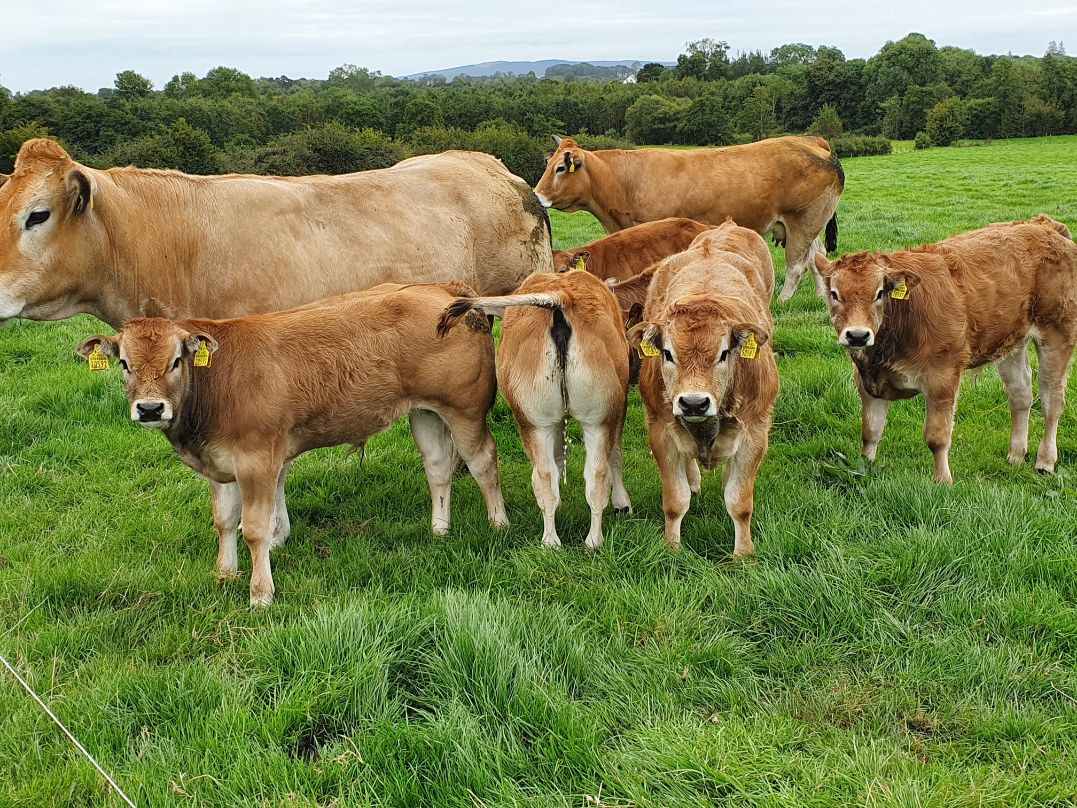 Grassland management is of critical importance as on Liam’s home farm, he has 35-acres of grassland. Liam feels to turn out 80 cattle in the springtime, your farming techniques must be “one hundred per cent”.

Liam has a stock bull on his farm and usually AIs approximately 40% of his pedigree females to Parthenaise sires.

He calves half of the herd in October and the other half in April/May for two reasons: to keep calves scour and pneumonia-free and to have bulls for sale of various ages.

He culls cows that are not performing to their full potential, regardless of age.

“The bulls would want to be 18 months minimum to sell, so the autumn-calving heifers accommodate that for 18 months later then.”

“My ideal cow would be approximately 650-700kg, that will rear her calf and the weight of the calf when it is weaned will be two thirds her weight. My smallest cow is the best producer in my herd; she is 650kgs, and her calf was weaned last summer at 420kgs.”

He has carried out embryo transfer work on the farm using a cow called Alamira Brenda.

“I got two embryos from Alamira Brenda while she reared her own calf. Then I waited later until her calf was reared and got five embryos from her. I have the first two calves still on the farm. The other five went to two breeders.”

Liam has always attended agricultural shows, his local show Charleville, the Kingdom Fair and Tullamore show amongst others.

There are five commercial sucklers on Liam’s farm, so customers who come to see bulls can view see the fruits of Parthenaise blood in cross-breeding programmes.

“They can make up their mind then if they have that type of cow at home and get an inside view of what the Parthenaise breed can do for the commercial cattle. We have sold a good few bulls into dairy herds; the breed is good for the dairy cow because of the quality of the breed.” 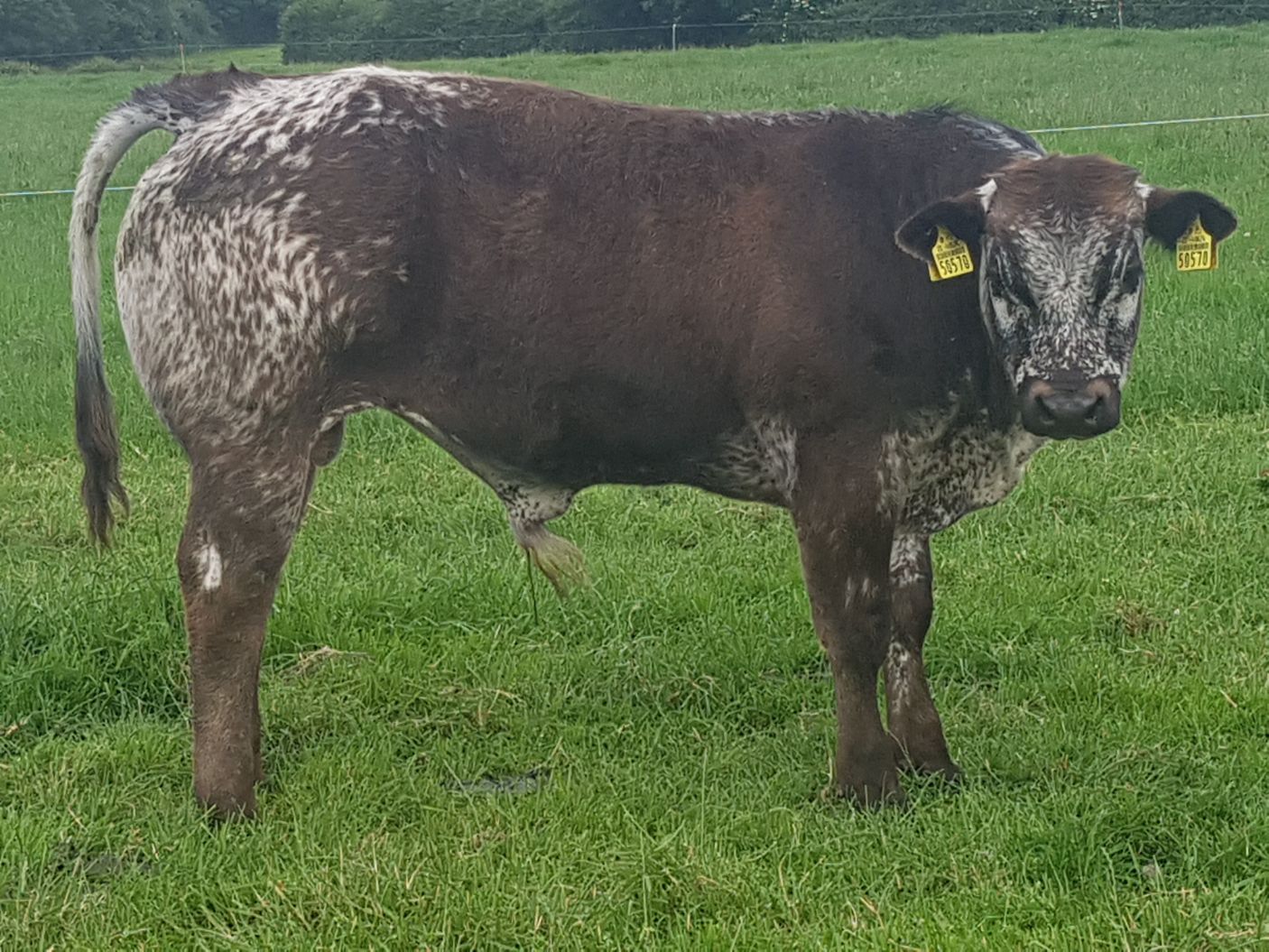 E and U grade progeny

Liam slaughters some of his progeny in Nenagh and Roscrea. A fortnight ago, he slaughtered a commercial bull of 15 months, which killed out at 440kgs, an E-2 =, and came into €1,778.

“I killed four bulls last November three, of which were purebred because if I feel a bull is not good enough for various reasons, I fatten the bull. Those three bulls all graded Es and, the commercial bull graded a U.”

“I do notice a lot depends on the time of year you are selling your animals to the factory as well. My commercial bulls can go to 580kgs carcass weight. I killed one last September; he was an E and made me €2,200. There was no mention of being overweight or anything.”

“More than half of my animals will grades Es. I had no sections on my cows in the last couple of years due to picking Parthenaise bulls to match the cows.”

“I find Parthenaise bulls easy to fatten. Besides, all of my heifers are either retained or sold for breeding, which there is a huge demand for.”

Liam has exported heifers to the Czech Republic. In 2018 and 2019, the Pathenaise Cattle Society exported a consignment to the IBR-free Czech Republic, four of which were his.

He has also exported cattle to the UK. A bull that scooped silverware at Bantry Agricultural Show was later purchased by Paul Webber from Somerset in the UK.

Within the island of Ireland, four start-up herds have purchased heifers from him in recent years.

“I am one of the few farmers last year that sold all their purebred heifers. At the moment, I have five heifers going to the bull; they will be retained within the herd for now. I have refused two people already who are trying to buy them from me.” added the Irish Parthenaise Cattle Society treasurer.

“Suckler cows have to be minimum, a good all grade cow from the beef herds, that will produce a good quality animal, whether you are selling or sending that animal to the factory, a minimum R+, but U grade if anything. There is a big difference in prices between an R grade and U grade animal even at the mart.” Liam of the Alamira Parthenaise herd concluded.

Want to share your story as part of our Suckler Focus series, like the Alamira Parthenaise herd? Email – catherina@thatsfarming.com.

- Advertisement -
Previous articleQuiz: Are you a true mart-goer?
Next articleCull cows sell to €1,940 at Ballymote Mart